A Neolithic window on China's ancient past 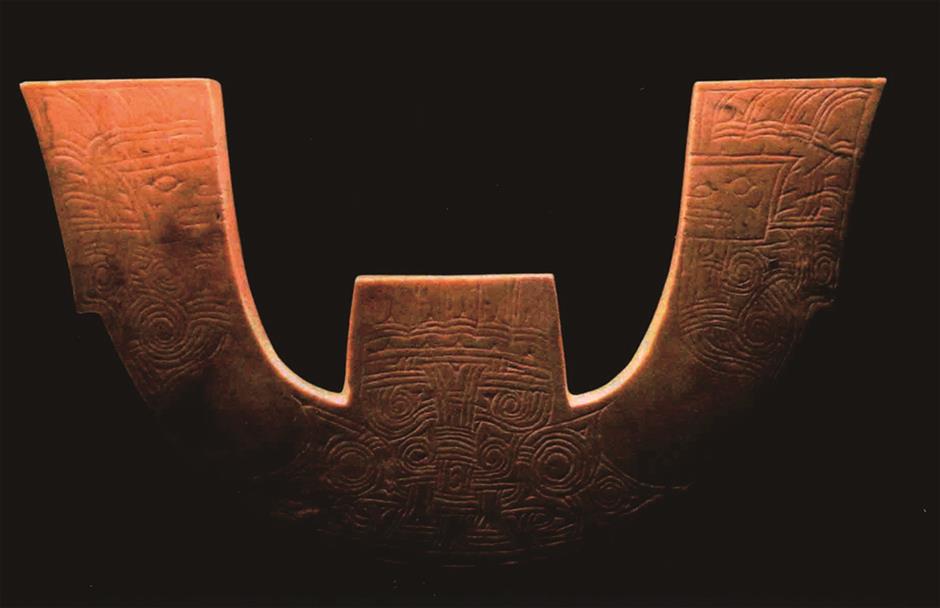 Among the exquisite jade objects unearthed at the Fanshan site, there is a unique type, shaped like trident.

The Liangzhu archeological site, hailed as one of the most important relic sites of the Neolithic Age in China, is a window to one of the world's oldest civilizations.

Named after the locale where its evidence was first discovered, Liangzhu Culture dates back as much as 5,000 years and is thought to have lasted about 1,000 years.

In Yuhang District of Hangzhou in Zhejiang Province, the core area of Liangzhu Culture, the Archeological Ruins of Liangzhu City are listed as a World Heritage Site by UNESCO.

The ancient culture showcases the significance of Yangtze River basin in the origin of Chinese civilization.

Experts believe that Liangzhu is an early regional state with a unified belief system based on rice cultivation.

The site was initially excavated by Shi Xingeng who worked at West Lake Museum in Zhejiang Province, predecessor of the Zhejiang Provincial Museum, in 1936. Shi was not a professional archeologist, but an assistant at the department of natural science.

In May 1935, Shi participated in the excavation of a site in the Gudang area of Hangzhou.

A stone axe with holes found there captured Shi's attention as he had seen similar ones in his hometown Liangzhu Town.

Grave-robbing was prevalent in his hometown. Many stone and pottery shards were scattered around the holes dug by grave robbers.

With the support of Dong Yumao, curator of the West Lake Museum, Shi led three rounds of excavation in Liangzhu Town from December 1936 to March 1937.

A large number of relics including stoneware and pottery shards were found, proving the existence of an ancient civilization.

The Lugou Bridge Incident, a battle between the Chinese army and Japanese invaders on July 7, 1937, suspended his research.

After many setbacks, Shi published the book "Liangzhu" in Shanghai in 1938. However, he died of scarlet fever one year later.

In 1959, the term "Liangzhu Culture" was proposed by distinguished archeologist Xia Nai.

The discovery of Liangzhu Culture gives solid physical evidence that Chinese civilization extends back 5,000 years. Experts divide the Archeological Ruins of Liangzhu City into three areas: The central area is a palace site that spans 30 hectares, which was surrounded by the walled area spanning around 300 hectares. Outside of the walled area, remains are found over about 800 hectares. To the north and west lies the ancient hydraulic system, which comprised 11 dams. Archeologists also found sacrificial altars on Yaoshan Mountain and Huiguan Mountain.

Liangzhu Culture is considered one of the most important Neolithic jade cultures in China. Tremendous jade artifacts have been unearthed.

They were designed into various forms, such as cong, or tube, bi, or disc, and yue, or axe. Instead of practical utensils, the objects are closely associated with burial rites. The sacrificial vessels were often buried with the dead.

On the 50th anniversary of the discovery of the Liangzhu site, archeologists found 11 tombs, which experts suggested belonged to the nobility, at the Fanshan site in Liangzhu Old City. The tombs were about 3 meters long, 2 meters wide and 1.3 meters deep. More than 3,500 relics were unearthed, including pottery, stoneware, ivory artifacts, lacquerware and jade objects. The number of jade objects accounted for more than 90 percent.

Among the exquisite jade objects, there is a unique type, shaped like trident. They were often placed on the occupants' heads.

Experts believe the trident was a headpiece placed on the crown or attached to hair. They always coexisted with jade yue. It suggested the instruments were used to memorialize the ruling class, which revealed Liangzhu Culture was highly stratified.

Relic M14:135, for example, is embellished with finely engraved zoomorphic masks, which feature a pair of eyes detailed by swirls encircling two sockets, on the middle part. On its left and right sides are the patterns of birds, which are also incised with spiral lines.

The plaques has attracted much speculation. Some experts like Liu Bin, director of Zhejiang Provincial Institute of Cultural Relics and Archeology, think that the object is an embodiment of a bird, which Liangzhu people worshiped.

People can get a look at the unique cultural relics at the Liangzhu Museum and the Zhejiang Provincial Museum.