Name controversy lives on for largest bronze vessel ever found 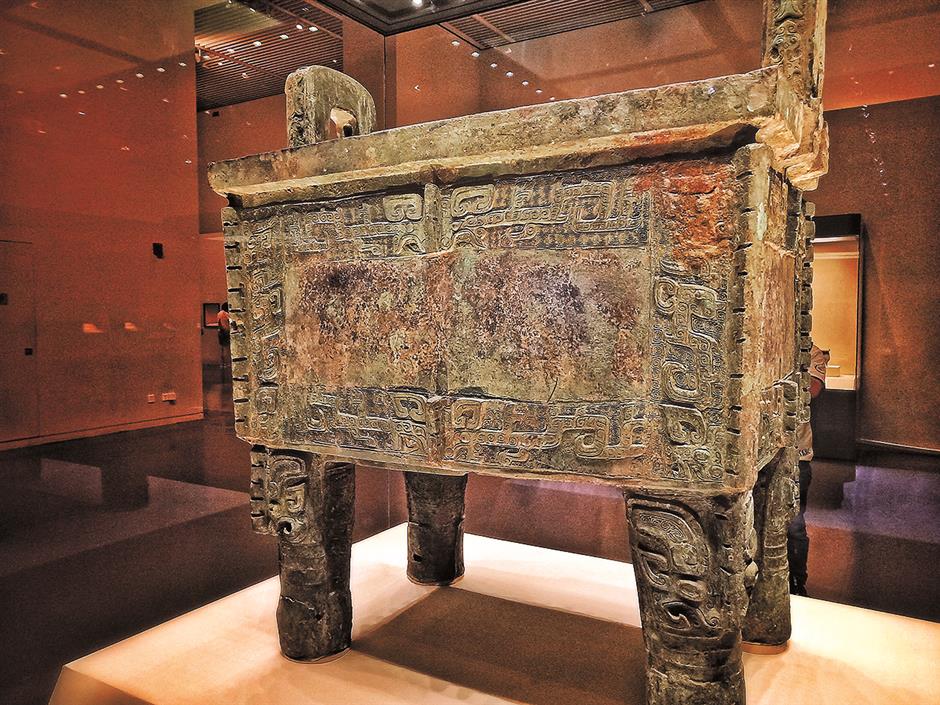 Exhibited at the National Museum of China in Beijing, Houmuwu Ding, formerly known as Simuwu Ding, is iconic.

One of the most popular ongoing exhibitions in Shanghai is the one displaying two ancient ding – Dake Ding and Dayu Ding – at the Shanghai Museum.

The pair was saved from turmoil by Pan's family, a prominent family in Suzhou, and are reunited after 17 years.

Ding, a type of Chinese ritual bronze, are ancient cauldrons.

Exhibited at the National Museum of China in Beijing, Houmuwu Ding, formerly known as Simuwu Ding, is also iconic.

It is the largest and heaviest bronze vessel found anywhere in the world.

The name, which is still controversial, was officially changed in 2011 when the National Museum of China reopened after its renovation.

Experts who support the name Houmuwu Ding believe that since the bronze vessel is dedicated to Fu Jing, wife of King Wu Ding, the Chinese character "hou," literally "queen," is more appropriate.

The name Houmuwu Ding, however, hasn't been acknowledged by many celebrated archeologists and historians, such as Xia Nai, Dong Zuobin and Guo Baojun.

They say the character "hou" didn't refer to the king's spouse until the Spring and Autumn Period (771-476 BC), which was hundreds of years later than the production time of the cultural relic – the Shang Dynasty (1600-1046 BC).

Many experts who support the name "Simuwu Ding" claim the character "si" is used to indicate sacrifice, which makes sense considering it is a ritual vessel.

Regardless of whether it's called Houmuwu Ding or Simuwu Ding, the historical value of the national treasure is beyond question.

The cultural relic reflects the supreme bronze craftsmanship of the Shang Dynasty.

The upright handles of the ding are adorned with a row of fish patterns featuring two tigers eating a human.

The rectangular belly is patterned with taotie, a ferocious mythical animal in Chinese culture, along with a dragon, cloud and thunder. The four corners of the belly are decorated with protruding edges.

A chemical analysis shows the Houmuwu Ding contains 84.77 percent copper, 11.64 percent tin and 2.79 percent lead. The proportion is almost the same as that recorded in the book "Kaogong Ji," or "Records of Examination of Craftsmanship."

It wasn't easy to make such a huge cauldron, which is said to require more than 1,000 kilograms of raw metal material and hundreds of craftsmen.

Houmuwu Ding was discovered by Wu Xizeng, who lived in the Wuguan Village in Anyang, Henan Province, in March of 1939.

Wu found the ding in a farmland. When it was unearthed, both handles were broken.

Upon hearing the news, the Japanese puppet allies came to the village to hunt for the treasure, but he villagers quickly buried it underground.

Houmuwu Ding was dug up again by the county's heritage conservation committee in July 1946.

With only one handle left, it was then displayed at a temple.

The whereabouts of the other handle is still unknown. As such, one of its handles that visitors see at the National Museum of China was copied by restorers.

Three months later, Houmuwu Ding was transported to Nanjing and sent to Chiang Kai-shek (1887-1975) as a gift to celebrate his 60th birthday.

After the liberation of Nanjing in April 1949, the national treasure was stored at the Preparatory Office of the Central Museum, the predecessor of the Nanjing Museum.

In 2002, the national treasure was listed as one of the cultural relics prohibited from exiting China.