Filled with the dreams of summer and sounds of nature, Shanghai Symphony Hall last weekend welcomed the opening of the 12th Music in the Summer Air (MISA) festival. Themed "Growing" this year, the festival will run through July 24 at the symphony hall and Shanghai Urban Music Lawn.

In concert with the theme, the music repertoire, opening installation art piece and night market include many "green" works that celebrate nature. Audiences also receive a box of flower seeds with their concert tickets.

The opening concert featured cheerful melodies like "A Midsummer Night's Dream Overture" by Felix Mendelssohn and ended on a high note with "The Pines of Rome" by Ottorino Respighi, a popular piece from the inaugural festival 12 years ago.

Visual scenes of nature were projected during the concert, with sounds of birds incorporated into "The Pines of Rome."

"This is the second MISA after the pandemic. Last year, we insisted the 'show must go on,' and this year, we wanted to address post-pandemic recovery with the 'growing' theme," said festival organizer Zhou Ping, also director of Shanghai Symphony Orchestra.

"It is also a metaphor of our growth in the past 12 years, and we wanted to further explore the relationship between music and city, music and youth, as well as music and future." 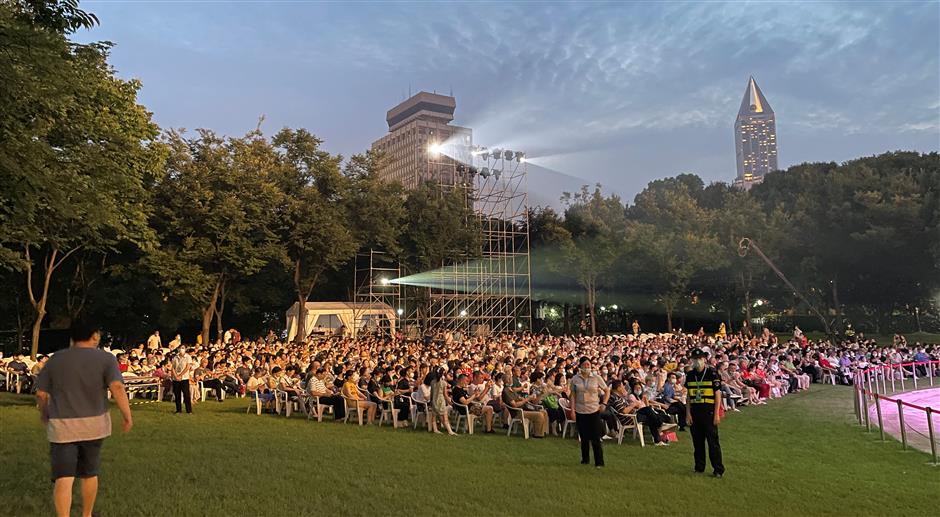 The audience enjoys an open-air festival performance on the Shanghai Urban Music Lawn.

Chinese director Zou Shuang has interpreted the sounds of different eras through the story of a woman's journey back in time and finding herself alone with a fridge filled with plants.

"The project was initiated in 2018 and 2019, and then delayed by the pandemic. From the beginning, it was an international collaboration with artists from five countries," Zou explained.

"When we got back to rehearsals again in March, partially virtually since some of us were in different places, our experience with the pandemic certainly brought new aspects to the initial concept of this project about nature."

Chinese composer Tan Dun will pay tribute to the 110th anniversary of Mahler's death in a concert titled "The Song of the Earth." Conducted by Tan, it will feature Schoenberg's rearranged version of "Das Lied von der Erde," and Tan's "Earth Concerto for Ceramic Percussion and Orchestra."