To celebrate the 100th anniversary of the founding of the Communist Part of China, students and teachers at the Shanghai Art and Design Academy are telling "red" stories through a variety of forms of intangible cultural heritage.

Thirty-five traditional handicrafts of intangible cultural heritage are included in the school's courses, such as jade carving, wood printing and silver jewelry making. 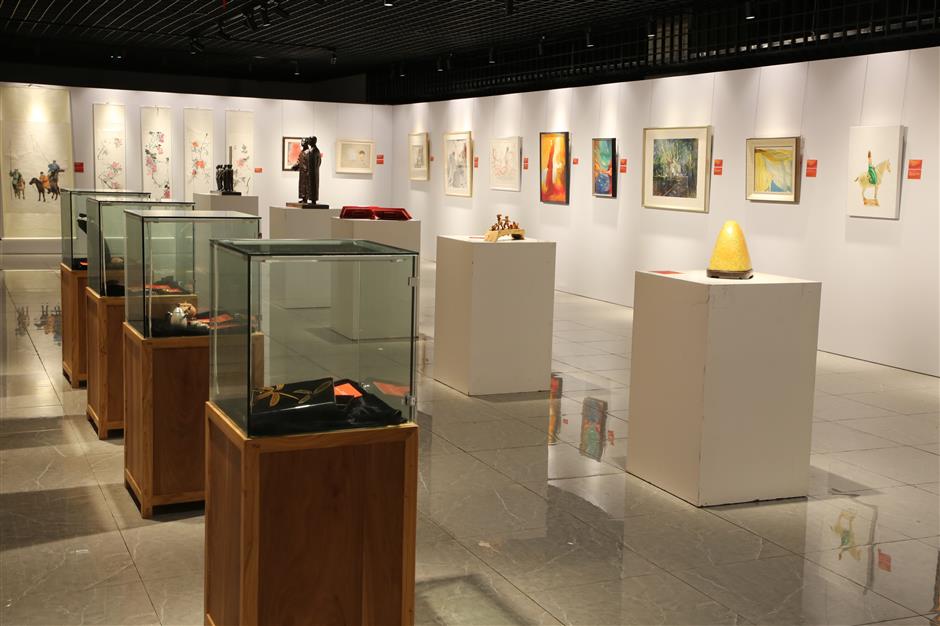 Pieces created by teachers and students from the Shanghai Art and Design Academy to mark the 100th anniversary of the Communist Party of China.

One highlight is a wood carving – the Business Journey – which was inspired by the national strategic concept of the Silk Road Economic Belt in 2013.

The creator Yao Chenyang also produced a scene of a team of businessmen traveling through the Gobi Desert to the West through the ancient Silk Road.

Yao used boxwood for the works.

"I want to pay respect to those brave ancestors," said Yao. "We are responsible for forging ahead and realizing the Chinese dream of great national rejuvenation." 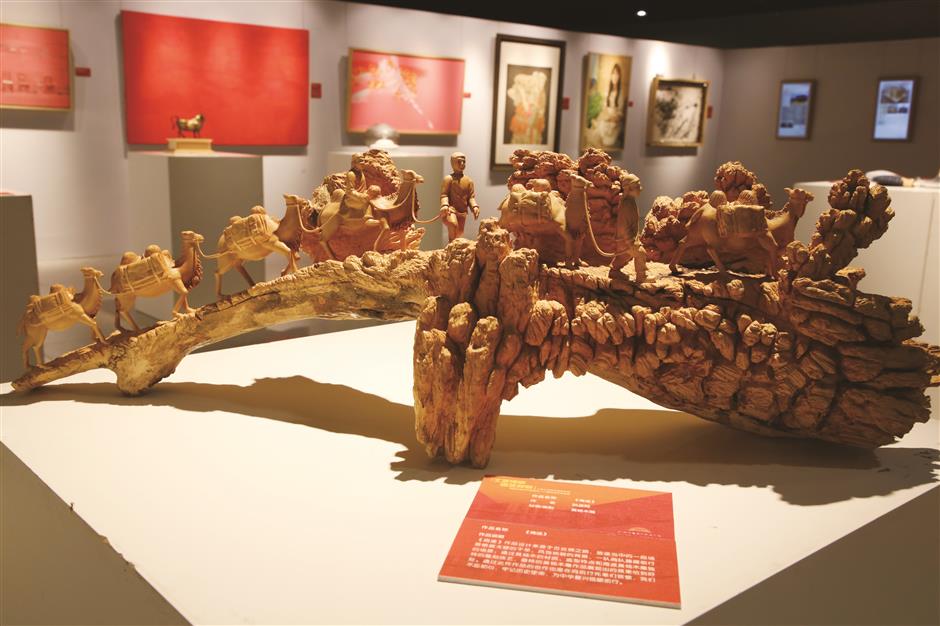 Yao Chenyang's wood-carving "The Business Journey" creates a scene of a team of businessmen traveling through the Gobi desert to the West through the ancient Silk Road.

In the exhibition hall, a series of sculptures "Turning the Enemy's Rear to the Front," features nine people – from soldiers to merchants and teachers – all looking straight ahead with their heads held high.It took Li Haoze three months to finish the series.

It aims to reflect the stories of people from all walks of life in Shanghai who went to the front to support the New Fourth Army during revolutionary times.

"I used a realistic style to show the great power in the fight against the enemies under the leadership of the Communist Party of China when the nation was in peril," said Li. 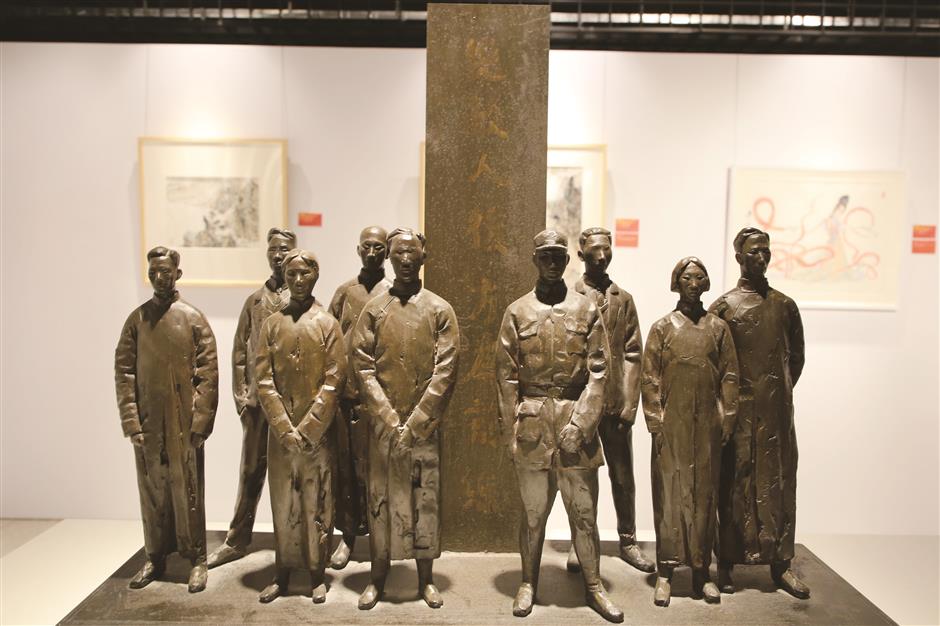 A series of sculptures, "Turning the Enemy's Rear to the Front" created by Li Haoze, features nine people, including soldiers, merchants and teachers, all looking straight ahead with their heads held high.

As Jiading is the hometown of bamboo carving, the art and design academy includes it as a traditional art course.

A series of bamboo carving work – "Never Forget Why You Started," including the "Poem of Chairman Mao" and the "Old Soldier," combines traditional poems, calligraphies and paintings as a whole to extol the lofty ideals and practices of China's revolutionary leaders and forefathers. 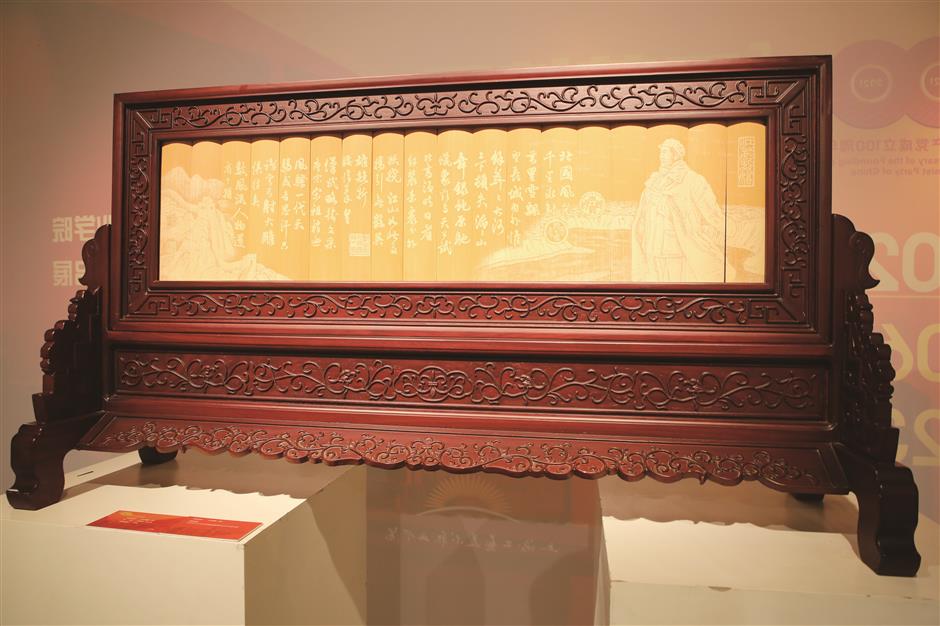 A bamboo carving with the poem "Snow, on the Pattern of Qinyuanchun" written by Chairman Mao Zedong. 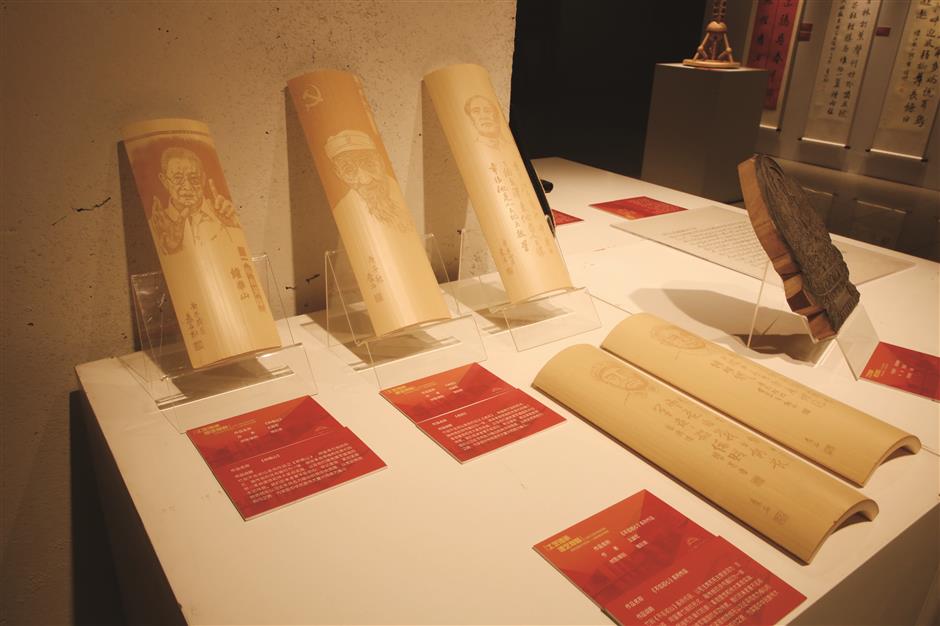 Cheng Peichu, who teaches a porcelain carving class, fired two red, square vitrolites – pigmented glass – with the theme of the First National Congress of the Communist Party of China's site and the Red Boat where the Congress moved to in Jiaxing in Zhejiang Province after the initial meeting in Shanghai was raided by police. 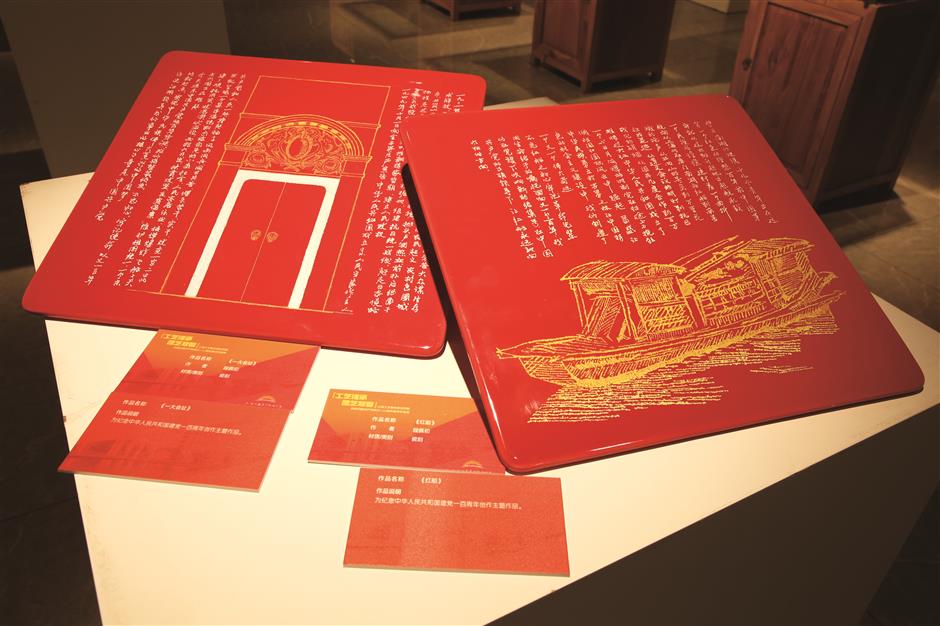 Cheng Peichu, teacher of porcelain carving, created two red, square vitrolite pieces with the theme of the site of the First National Congress of the Communist Party of China and the Red Boat of the Congress.

"Red Hat" created by haipai (Shanghai's East-Meets-West style) jade sculpture master Hua Guojin and his students is another highlight. The color of the artwork is essentially gray and spotted with stars carved by red natural stone.

"I intentionally keep the yellowish part on the original stone to reflect the twists and turns, and how spectacular it has been over the past 100 years," said Hua. 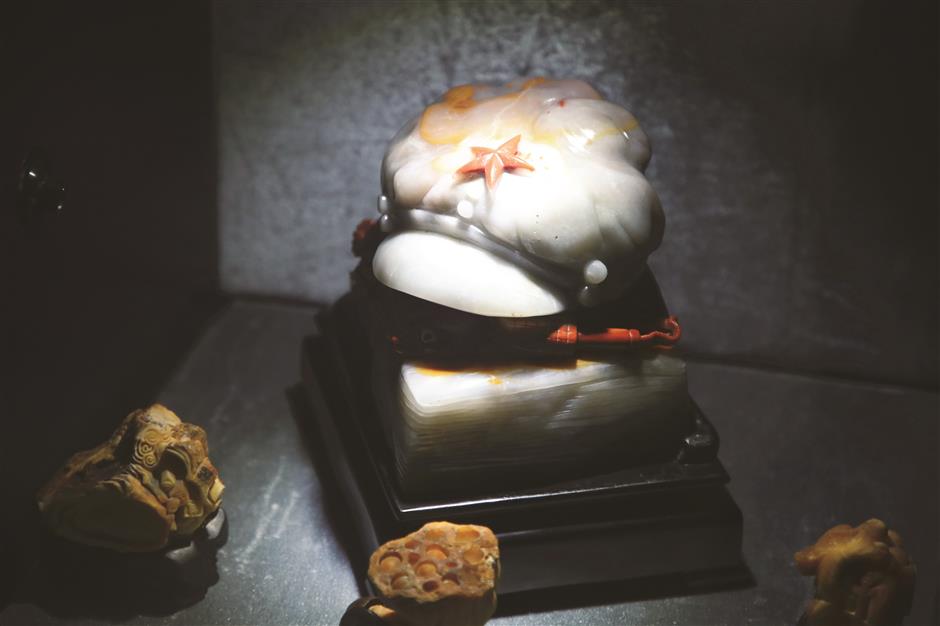 Focusing on traditional arts and crafts, the academy aims to promote the glorious history of the CPC, encouraging students to show their patriotic fervor through art.

From nomads to modern cars: a history of leather

In cooperation with the Shanghai Art and Design Academy and the HSF Leather Carving and Art Inheritor Institution, the Shanghai Auto Museum has launched the "Leather World – Theme Exhibition of Chinese Leather Culture and Art" to showcase traditional leather art.

And the craftsmanship and techniques have become diversified as the craft spread throughout the country.

The exhibition is the largest focusing on leather throughout China's history with more than 170 pieces on display.

It comprises several themes including traditional art and craft, cars, travel and commuting and creative ideas.

The travel exhibits include items such as traditional saddles used by nomads, bicycle seats, motorcycle helmets and the interiors of modern cars.

The curator of the exhibition aims to showcase the infinite possibilities of linking automobiles and art.

Apart from the exhibition, activities such as a cultural and creative design competition, an academic forum and interactive handmade craft are included.