Elixir on a plate to relieve sultry days of summer

In Zhuanghang Town in Fengxian District, locals have what they think is a sure-fire antidote to sanfu, the hottest period of summer – mutton soup.

The town's tradition of eating mutton to survive scorching July and August weather dates back more than 600 years. Goat mutton has long played a significant role in local rituals. It is a must-have dish related to the worship of ancestors during the Qingming Festival and a winter elixir during the Chinese New Year. 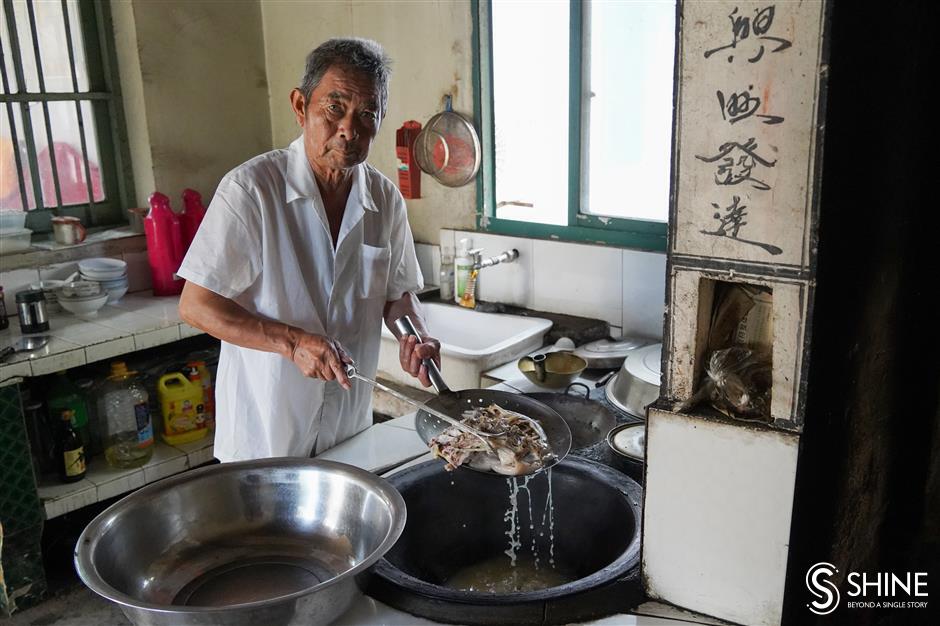 Jin Minghua, 73, is a Zhuanghang chef of local fame.

"It is unacceptable not to serve mutton at a wedding feast," says Jin Minghua, 73.

Jin is a Zhuanghang chef of local fame, who cooks for special occasions like weddings and funerals. Unlike banquets for weddings, funerals, baby showers and birthdays in big cities, folks who live in rural areas hold their celebrations in their own farmhouses rather than in restaurants. Chefs like Jin are invited to cook on the spot.

Take the traditional rural wedding banquets as an example. The celebrations often last three days. Lavish banquets symbolize the prosperity of the hosts.

"If there is a dish of goat head at a banquet, it means that the host family is well-off because that is the most expensive part of a goat," says Jin who has been cooking for 55 years. 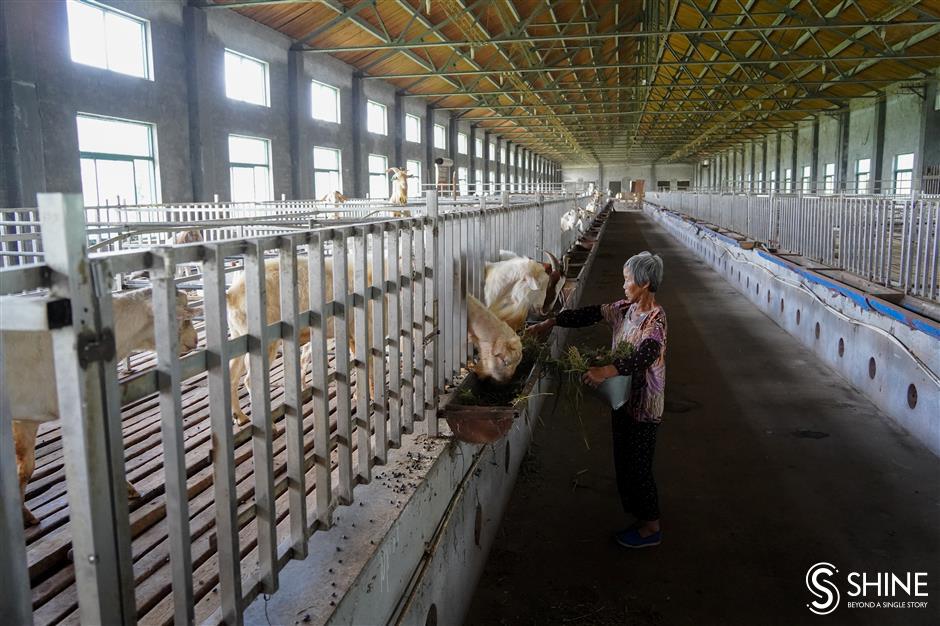 Goats raised by Jin's family are fed on local grass.

Driving an hour from the city center, I arrive at Jin's house, which sits amid farmland, at 10 in the morning. Wearing a white chef's uniform, Jin immediately ushers me into his kitchen. A big pot of stew is simmering away on the zaotou, a traditional Chinese cooking stove. Jin says he has been preparing stewed mutton ribs since seven in the morning.

The mutton comes from a nearby farm, run by his son. I hear the "baas" of the herd and smell something rather unpleasant. It comes from the breed of goats they raise, called Boers, which produce ample, quality meat.

"They are fed local grass," says Jin. "The age of the goats matters. I always choose goats whose baby teeth are gradually being replaced by adult teeth."

Seeing my confusion, Jin explains that he's referring to the goats between 10 and 18 months old.

Jin lifts the pot lid to check on his stew. The steam rises, emitting an enticing aroma. Though I am not a fan of mutton, the aroma whets my appetite.

"I didn't eat mutton until I began to work in the village 10 years ago," says a village official surnamed He. "The goat meat is fresh, so there is no pungent smell like you might find in many restaurants. The quality of mutton here changed my opinion of meat."

I can't wait to taste the dish.

Jin fishes the ribs out of the pot with a hook and slices the meat into pieces on a cutting board. After putting slices in a plate, he ladles soup into a bowl and sprinkles it with chopped green onions. Finally, he prepares a side bowl of soy sauce, which adds taste to the mutton.

I dig in. The mutton is tender and juicy. Each mouthful is an explosion of flavor. The soup is a creamy white color with a milky smooth flavor. 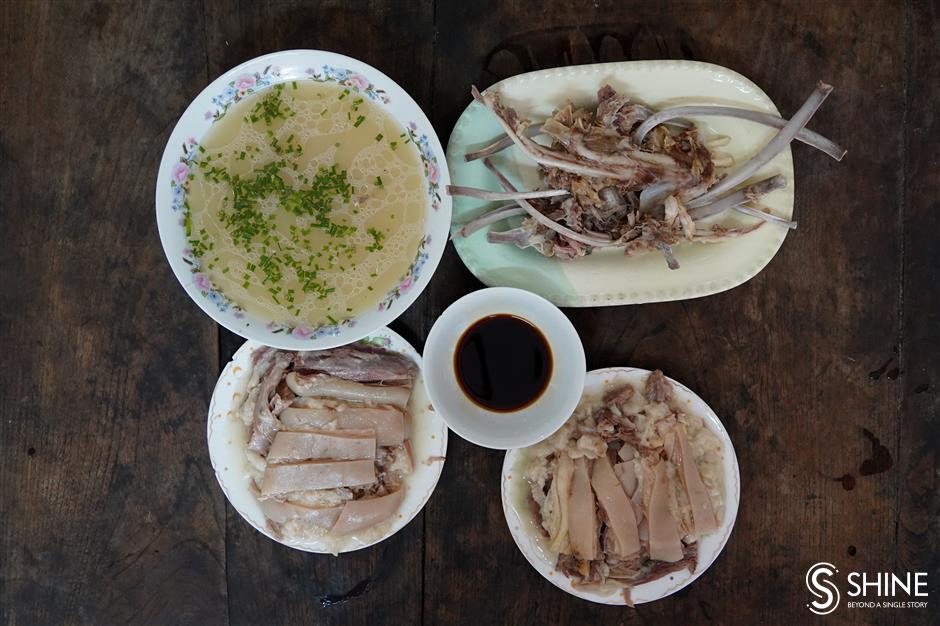 Eating mutton in scorching sanfu has been a tradition in Zhuanghang Village for more than 600 years.

I try to coax out Jin's secret recipe. He simply replies that it is nothing special.

The meat is washed and put into a pot with the skin side down. Then it's covered with water. Once the pot starts boiling, the scum that forms is skimmed off. Yellow rice wine and ginger slices are added, and the pot is brought to a simmer for two-and-a-half to three hours, Jin tells me.

"Water should be added only at the start, otherwise the flavor of the broth won't be as intense," he explains. "Compared with cooking on a gas stove, the mutton cooked on a zaotou tastes better."

Its walls covered with soot, the zaotou looks old. According to Jin, it's been around for nearly 40 years.

Jin was born in Zhuanghang and has eaten mutton since childhood. During the hottest period of summer, he used to eat 150 to 200 grams of mutton every day when he was young.

"A goat is full of treasures," says Jin. "All its parts are edible except the intestines. The most nutritious part is the liver."

The local official He says his daughter had blood abnormalities when she was an infant, but a slice of goat liver every day cured the problem.

"I am not sure if it was the liver, but I believe it did affect the outcome," says He.

Traditional Chinese medicine holds that mutton is imbued with "warm" properties that can replenish qi, or energy flow, correct deficiencies and strengthen the stomach and spleen. Eating mutton in summer causes diners to sweat, which cools the body and clears out dampness. In traditional medicine, dampness is said to be caused by the body's failure to burn off or transform moisture.

"Before sanfu is the plum rain season, during which dampness accumulates in the body," says Jin. "That's especially true for farmers who work in the fields, resulting in the invasion of cold (one of six external pathogens in traditional medicine theory)."

Locals in Zhuanghang often drink shaojiu, or distilled liquor, while eating mutton. The combination of the two is listed as an intangible cultural heritage of Shanghai.