In the hit film "Avatar," there is a giant tree called Hometree, which is a point of extreme spiritual significance to the Na'vi clans on Pandora. In the real world, trees have long been involved in a number of religious practices, such as the bronze holy tree found at Sanxingdui.

Sanxingdui is an archeological site in Guanghan, Sichuan Province. Archeologists have identified the Sanxingdui culture to be part of the ancient kingdom of Shu.

Hundreds of artifacts have been unearthed there, which provide a glimpse into the ancient civilization that dates back to the Bronze Age more than 3,000 years ago.

Known as the "source of the Yangtze River civilization," Sanxingdui is considered one of the greatest archeological discoveries of the 20th century for its vast size, age and rich cultural content.

Evidence of the archeological site was first discovered by a farmer named Yan Daocheng. Yan came across a pit buried with jade artifacts while dredging a ditch in 1929. 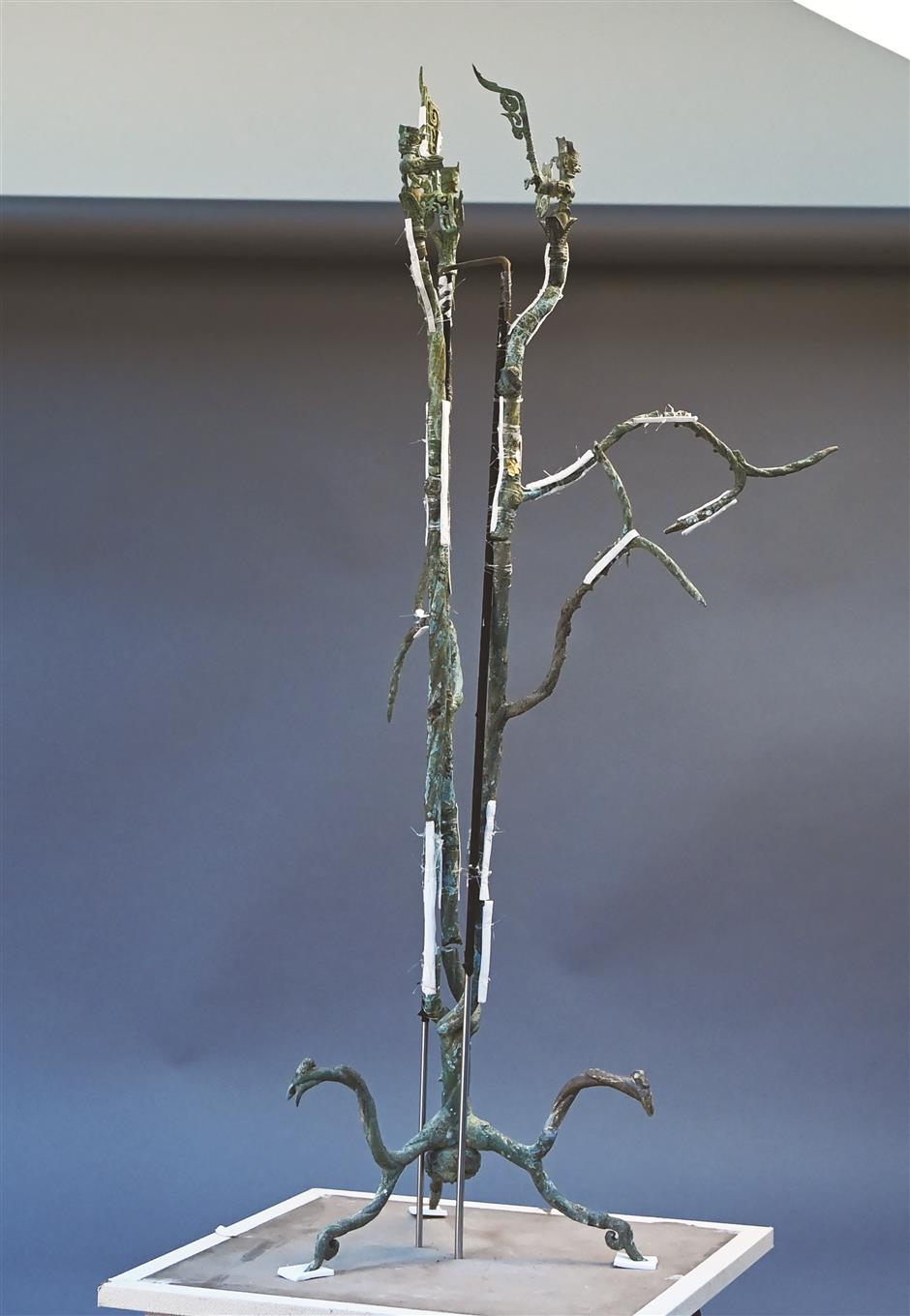 The huge bronze holy tree is one of the highlights of the findings unearthed from Sanxingdui archeological site.

Hearing the news, a British missionary in Guanghan went to the site and contacted local magistrates and experts in 1931.

The findings were sent to the museum at West China Union University for safekeeping.

In 1934, the director of the museum, Dr David Crockett Graham, and his assistant led the first archeological excavation of the site.

Although many excavations were conducted afterward, the world didn't realize the scale of the discovery until 1986.

The excavation attracted widespread academic attention around the world, as two sacrificial pits containing thousands of gold, bronze, jade and pottery artifacts were found at that time.

Other distinguished findings include a ceremonial mask weighing about 280 grams and estimated to be made of 84 percent gold, and a large bronze mask with protruding pupils. 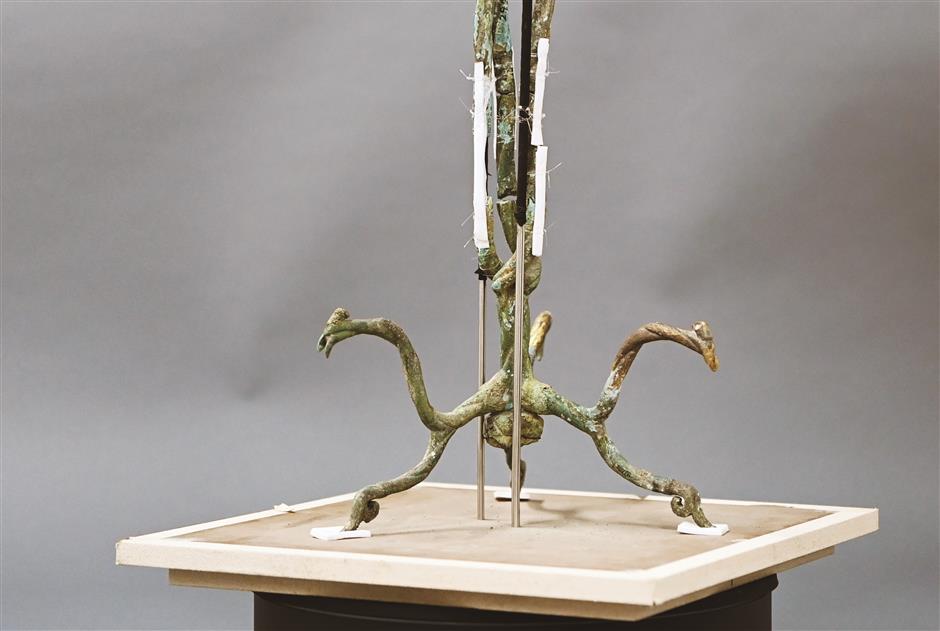 The base of the bronze tree is comprised of three curved feet.

The most enigmatic finding, however, is a huge bronze holy tree 3.96 meters high, the tallest and best preserved of the six bronze trees that have been found in the No. 2 sacrificial pit. Its top is still missing, so it should be even taller. Experts estimate it could have been around 5 meters high.

It took restorers eight years to reassemble the holy tree, which consists of two parts – a base and trunk. Arching over in a gentle manner and bearing fruit, nine branches radiate from the central trunk with three layers. Raising their heads proudly, nine birds perch on top of the branches.

The tree is also cast with a dragon, which seems to move downward to the Earth.

Decorated with cloud patterns, the base of the tree is comprised of three curved feet, which look like three rolling mountains. 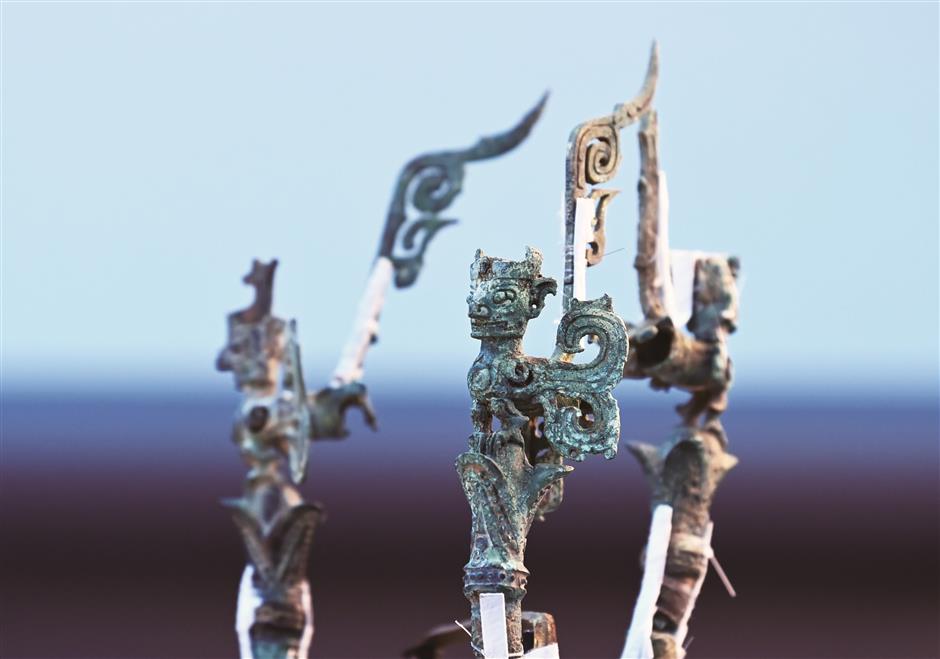 Bronze figurines perch on top of the tree branches.

Experts believe the tree is embedded with ancient people's worship of the solar deity, as birds were often used to symbolize the sun in ancient Chinese civilization.

In Chinese mythology, there were 10 suns, which initially rose in turn from a divine tree called Fusang.

The tree grew in Tanggu, which is believed to be today's Rizhao in Shandong Province. One year, the 10 suns came out together.

The intense heat resulted in catastrophic drought, which led to people starving. Houyi, a master archer, climbed to the top of a high mountain and shot down nine suns.

"The ancient Shu people believed in the legend of 10 suns," said Zhu Jiake, executive deputy director of the Sanxingdui Museum. "They believed the birds carried the other nine suns so that people could see only one sun in the sky. In their minds, the nine suns became nine birds that landed on the holy tree."

Based on the legend, the bronze holy tree could be the embodiment of Fusang, while the flying dragon was endowed with the function of communicating between Earth and heaven.

Displayed at the Sanxingdui Museum, the bronze holy tree is one of the museum's highlights.