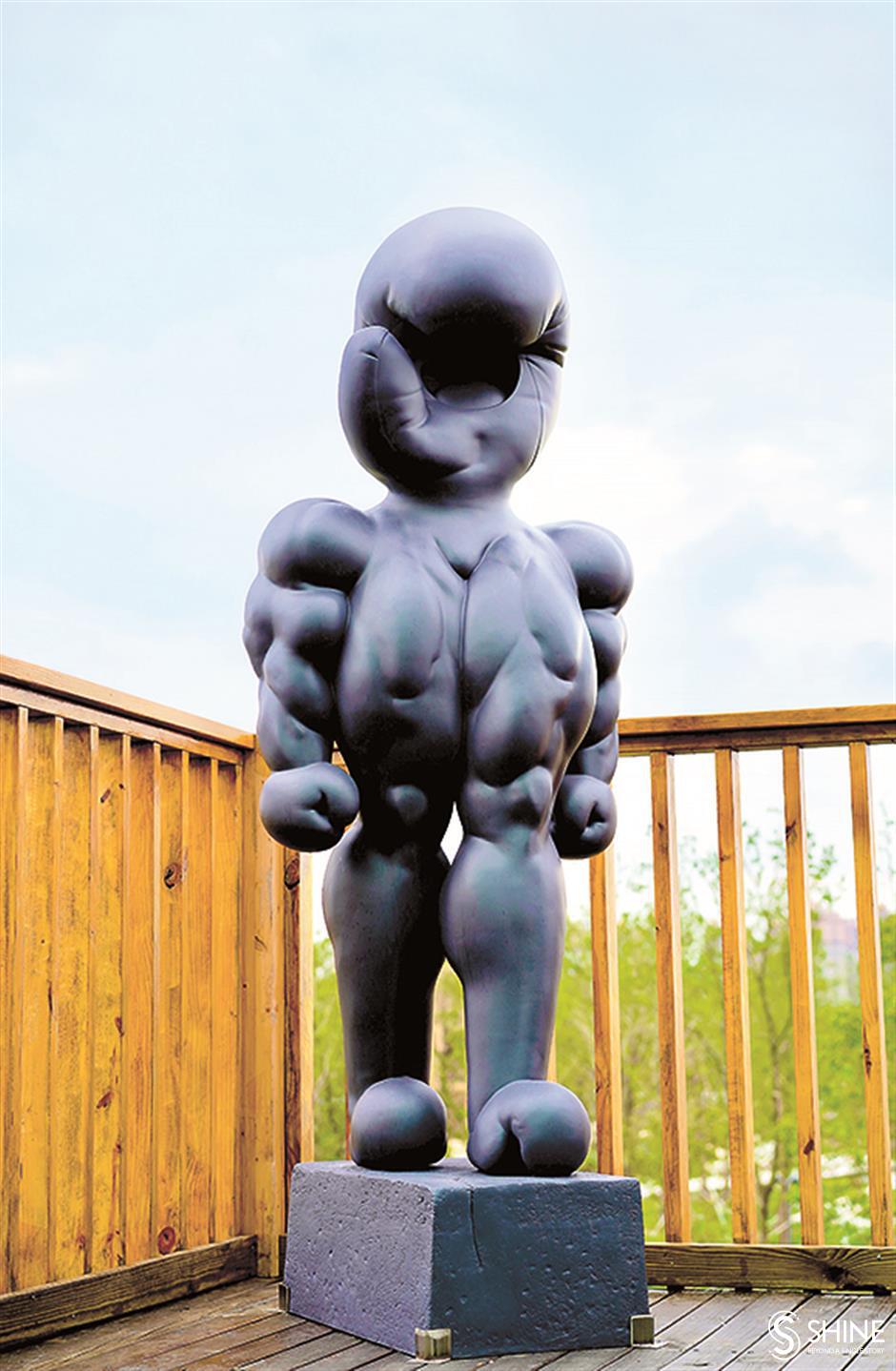 "Portrait of Boxing Man No.6" by Shang Liang

A total of 31 outstanding domestic and foreign artists, including Shang Liang, Liu Yi, Pedro Reyes and Rafael Domenech, were invited to this biennial project, and 40 sculptures are displayed.

In addition to the works selected by the curatorial team from around the world that fit the theme and purpose of this exhibition, participating artists have also created on-site artworks that embody cultural identities, a sense of belonging and publicness, spontaneously employing the local wisdom and culture of Fengxian District.

Jinhai Lake, around which the exhibition is taking place, is commonly referred to as the "Shanghai Fish" due to its shape on a map resembling a giant koi carp jumping out of water. It is the largest artificial lake in the city. 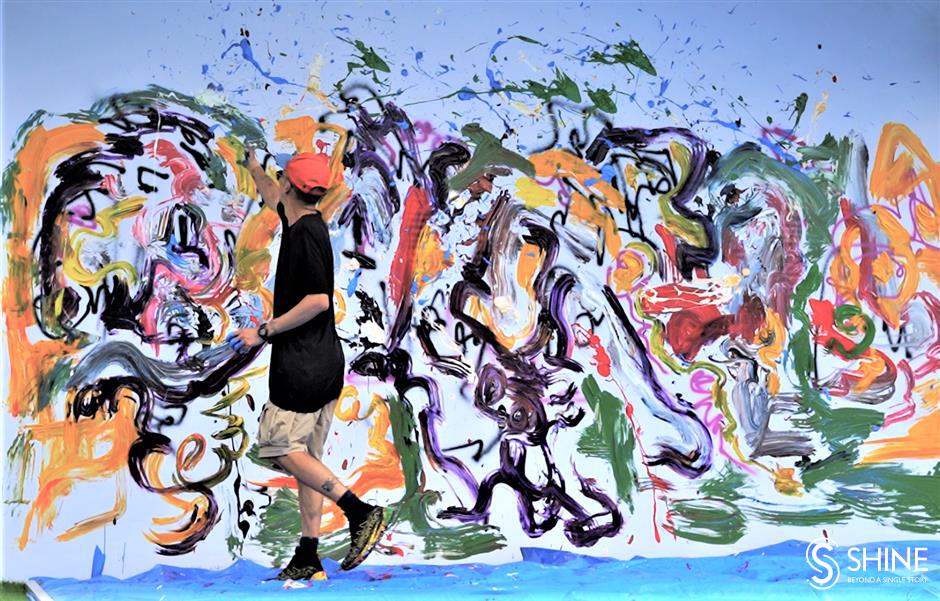 Nathan Zhou created impromptu graffiti "The Boring Cherry (Improvisation of a Fish)" at the exhibition site.

"His freestyle painting that was created outdoors on site was worth the journey out there for me. He took an immense white canvas and to the disjointed tremors of his sound art, he achieved a unique way of harmonizing the raw colors as part of the natural landscape," said Julie Chun, Art Historian and Critic.

"Most public art projects serve a function like a period that ends a sentence. Meaning the city with its businesses and office buildings tend to be the primary focus, and then later, cultural venues and events follow. What's impressive about Fengxian is that it has incorporated art and culture into its city building map. Art seems to have a primary distinction like a capital A that begins a sentence." 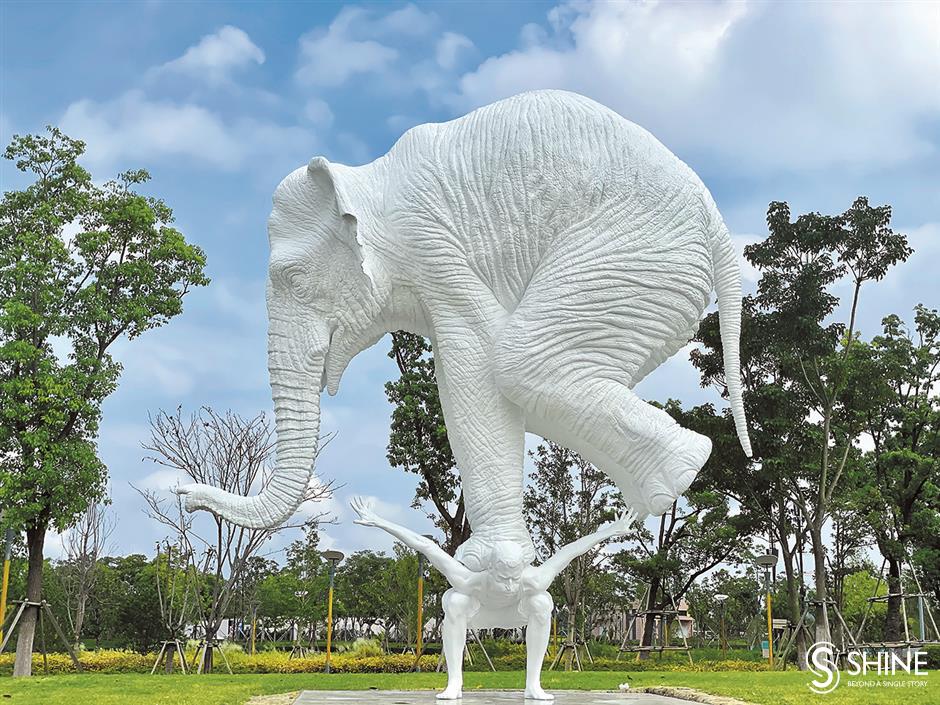 French artist Fabien Mérelle brought "Pentateuque" to the exhibition. The white, life-sized sculpture based on Mérelle's 2012 painting of the same name shows a bent-over man struggling to balance an elephant on his back. While the elephant is inspired by one at the Singapore zoo, Mérelle is predominantly making a witty reference to how societal expectations and culture may amount to "carrying a weight on one's shoulders."

Among her staple works, Chinese avant-garde artist Shang chose one of her latest for the exhibition – "Portrait of Boxing Man No.6," a boxing glove with a smiling mouth attached to a bulky muscular torso with no sexual organs.

Just like "Portrait of the Boxing Man No.2" of the same "Boxing Man" series, the legs and arms of the character are firmly attached to the thighs, which pays homage to ancient Egyptian culture.

Shang, who is constantly probing into strength, power, life and death, took part in the Jing'an International Sculpture Project with her "Sofa Man" sculpture, in which shredded bodies without faces are turned into sectional sofas. She said she was inspired by stand-in photo cutout boards at an amusement park in London.

"Visitors would like to sit on the 'Sofa Man' and take pictures with it," said Shang, who splits her time between Shanghai and Beijing. "And many would squeeze the 'Boxing Man' sculpture to see if it's elastic, or lean on its shoulder as the boxing man brings them a sense of security."

Liu, the founder of 61CREATIVE studio, selected "Child" and four other sculptures from his "Spring Messengers" for the exhibition.

His creation explores the relationships between body and space, spirits and materials, individual and public, and the presence and absence of culture.

The unique style of combining a classic figure with contemporary colors, presented in the daily digital drawing on his smart phone, has interpreted not only his curiosity and imagination, but also his personal memories and experiences.

The Shanghai native recorded his son's moments in a painting and turned it into "Child," which visitors can walk through.

"Everyone has their own struggles and agonies," said Liu. "The most powerful and enchanting part of art creation is to make the impossible possible. I enjoy creating art pieces tremendously, and hope the audience can share this kind of joy."

The exhibition runs through December 30, and visitors can also take in works by artists including Art Nom, Eric Baudart, Song Jianshu and Ouyang Sulong.