Archeological treasures from Sanxingdui Ruins go on display in Hangzhou

Gold masks, jade, ivory artifacts and bronze objects, the new discoveries from the six new sacrificial pits of Sanxingdui Ruins have been a sensation across China recently by virtue of their unique designs and exquisite craftsmanship.

Located in Guanghan City at southwestern China's Sichuan Province, the Sanxingdui Ruins have been dubbed as one of the world's greatest archaeological finds of the 20th century. Originally discovered in the late 1920s, the ruins covering an area of 12 square kilometers are believed to be the remnants of the Shu Kingdom, dating back some 4,800 years and lasting over 2,000 years.

Now, 139 sets of Sanxingdui antiques, including 65 top-level national treasures, have been transported to Hangzhou and are on display at West Lake Gallery through January 4.

The exhibition is divided into three sections, namely people, witchcraft and the kingdom. Visitors have swarmed to view the imagination and creativity of the ancient Chinese which far surpassed what people today had expected.

The ring-shaped sunbird is one of the highlights at the exhibition. This ancient artifact is made of gold leaf with a weight of 20 grams and a thickness of 0.02 centimeters. The center of the artifact is a sun pattern with 12 points. Surrounding the sun, there are four birds, flying in the same counter-clockwise direction.

According to scientists' research, the gold content in the artifact was as high as 94.2 percent. In 2005, the image of the gold sunbird adornment became the symbol of China culture heritage.

The sunbird could testify that the ancient Shu Kingdom people had already mastered gold processing technology about 3,000 years ago.

Apart from the sunbird, there are other gold pieces in the shape of frogs and golden masks on display. Scientists believe that these ancestors might melt gold by hot forge first and then hammer it into thin sheets before painting and carving patterns.

During decades of excavation, archeologists have also unearthed bronze artworks in the shapes of frogs, birds, tigers, snakes and the sun. They might designate the cosmology and world view of ancient Sanxingdui people.

The exhibition shows a bronze sun-shaped object which looks similar to a modern-day steering wheel. It is considered a proof of the sun-worship tradition in ancient Sanxingdui area. 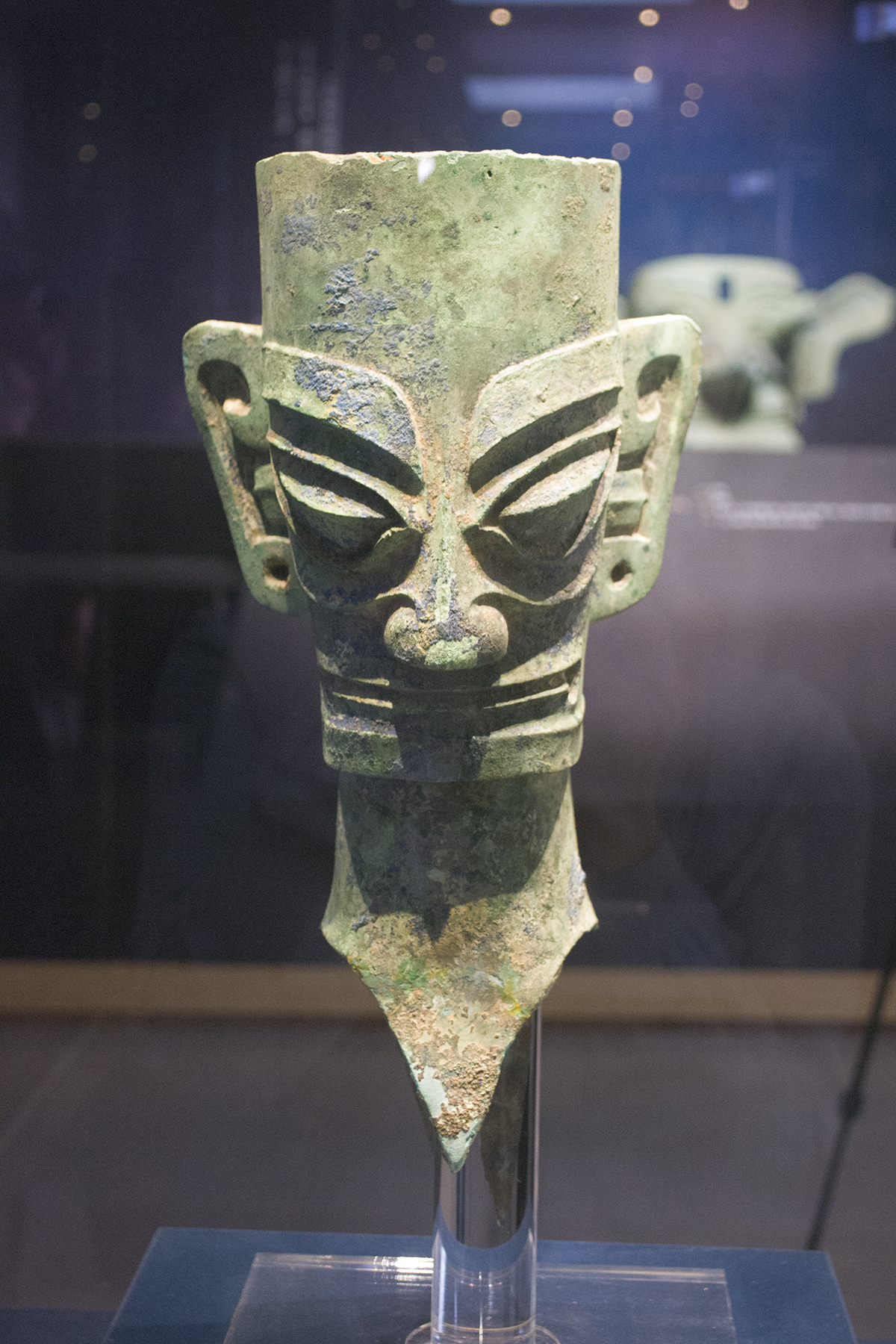 As for bronze figurines, they often feature a pair of protruding eyeballs and two big ears sticking out like wings, as evidenced by the exhibits.

It's said the first king of the ancient Shu Kingdom had protruding eyeballs and big ears, so his people made him an exaggerated facial mask and worshiped him as a god who could see thousands of miles ahead and hear from every corner.

A real-size replica at the entrance measures 180 centimeters in length. It is believed to be the largest bronze statue ever discovered in the world. The man is crowned and dressed up with three layers of narrow-sleeve costumes adorned with ornate patterns and extending his big arms as if trying to embrace something.

He is believed to be the incarnation of a god, wizard and man, in charge of the supreme power. Since the object in his hands had already disappeared, scientists still have no idea what exactly it is.

Different sizes of bronze figurines have been excavated from Sanxingdui throughout the decades. Archeologists categorized them into different hierarchies according to crowns, costumes and hairstyles. The one wearing a gold face mask is thought to have a great role in rituals.

Ancient Shu Kingdom people had a system of witchcraft. The wizard hosted ritual ceremonies by using varied talismans. The exhibition displays a clay handle of a spoon carved with a bird head, which is a ritual object worshipping ancestors.

Date: Through January 4 (closed on Mondays)