Whether centuries ago or in modern times, people process natural resources to manufacture fabrics and dyes. However, the present-day fashion industry sometimes takes nature's bounty for granted, and reckless and wanton plundering has seriously damaged the natural ecology, endangering plants and animals, even human.

Now, the China National Silk Museum is hosting an exhibition to discuss in-depth relationship between nature and fashion from both beauty and responsibility perspectives. The exhibition organizers hope that visitors can not only pay tribute to nature, but also start to give back to nature from their own closets.

The exhibition is categorized into three major sections. The first part introduces fabrics.

Fabric is the foundation of clothing. Previously, fabrics strictly came from nature, including plant fibers of cotton and linen and animal fibers of silk and wool. Different varieties determine the texture, breathability and dyeing feasibility.

In addition to natural fibers, woody plants and non-fiber animal skin and bones are also raw materials for fashion and can be made into ornate decorations.

The exhibition showcases some vintage garments from Western countries during the 18th century. One intriguing piece on display is a mid-18th century corset, a popular item for women at that time. The floral patterned corset is made up of several pieces of brocade fabric sewn together. It is also lined inside with linen.

Dresses from this era were supported by bustles, a cushion, metal or whalebone framework at the back below the waist in order to expand the skirt. The exhibits contain both daily dresses and ball gowns that were worn by women in the late 18th century. 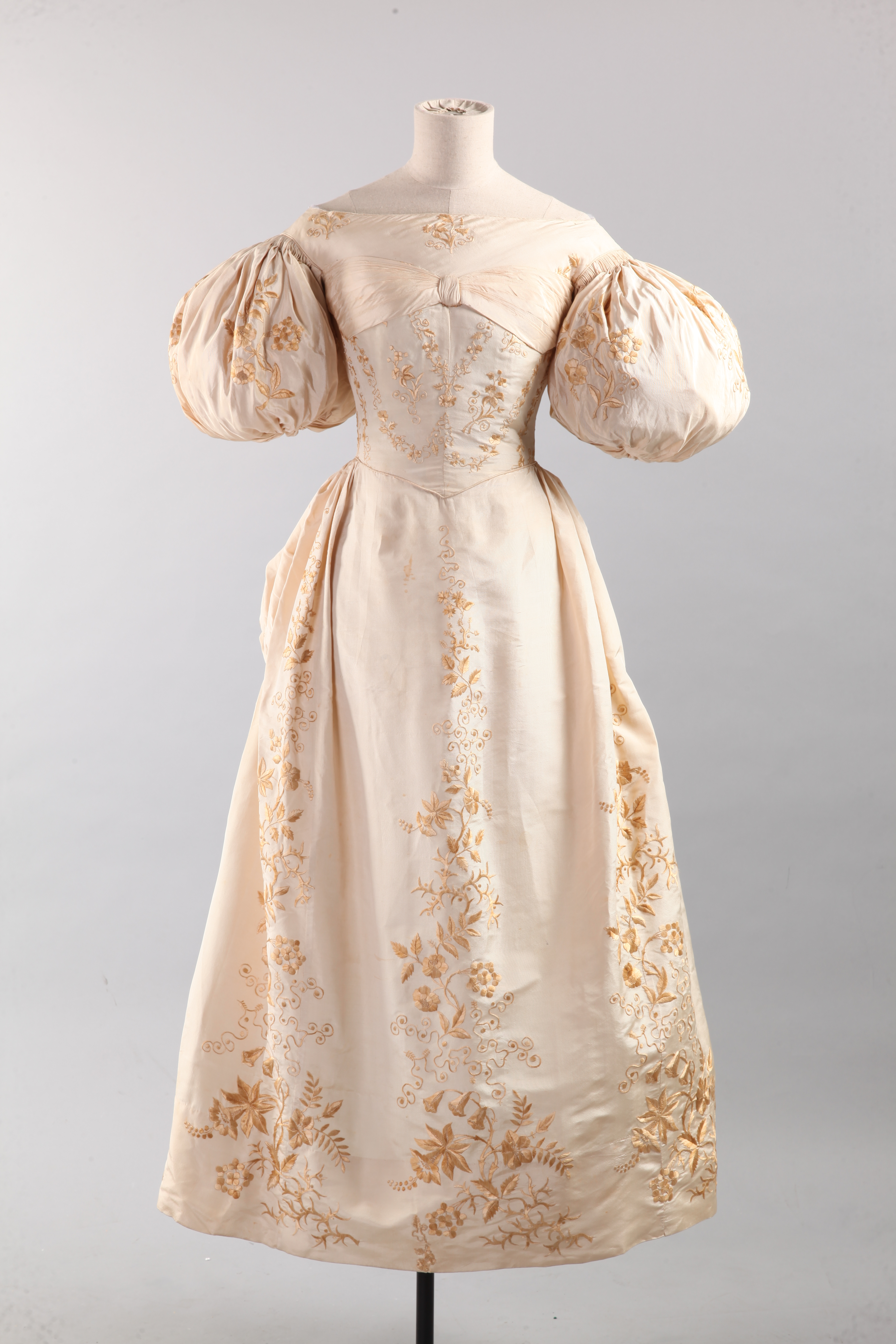 The second section introduces inspirations from nature. The wonders of nature have inspired endless ideas and fashion expressions. Designers and fabric makers have always observed unique plants and animals to create vivid designs on textiles through embroidery, printing and other techniques.

With the development of textile printing and dyeing technology, the details of the patterns were depicted in an increasingly specific and delicate manner.

When the industrial revolution took place in the UK during the 19th century, the luxurious Baroque style was gradually replaced by a neoclassical romantic style featuring wide shoulders, broad skirts and narrow waists.

New machines made it possible to produce printed textile products in large quantities. Semi-abstract and floral patterns became popular, as the exhibit showcases.

Fashion not only draws inspiration from nature, but also takes away its life. As modern industry continues to grow and expand, the damage to the environment is becoming increasingly serious.

A cascade of environmental pollution is emerging in many ways, resulting in the extinction of flora and fauna and ecological imbalance.

Fortunately, a group of fashion professionals are joining the sustainable team and pursuing ways to balance nature and fashion. The exhibition displays a cheongsam made of recycled plastic and a jacket made of recycled fishnet.

Meanwhile, the museum is also hosting the Emperor Qianlong's Color System Exhibition. Visitors can view the top-notch Qing Dynasty (1644-1911) royal costumes and learn about aesthetics during that period.

During the Qing Dynasty, Emperor Qianlong and his family had their own color matching system, which rigidly stipulated the use of colors and the production of fabrics and dyes.

Scientists have spent years researching imperial textiles from Qianlong's era, attempting to recreate the original system from centuries ago.

Today, some of the results of this research are on display as well.

A dragon robe on loan from the Beijing Art Museum is the highlight of the exhibition. Though the ornate textile lacks the original glittering texture from centuries ago, the sophisticated, unique patterns and craftsmanship still denote Qianlong's supremacy.

The robe's embroidered dragon, roaring waves and cloudy motifs show explicitly his monarchical power. In ancient Chinese culture, dragon patterns were exclusive to emperors, while phoenix patterns were for empresses.

Yellow and navy, the two exclusive colors for the royal family, dominate the whole robe. After researching garments from Qianlong, scientists have found that different shades of navy were the main colors used. 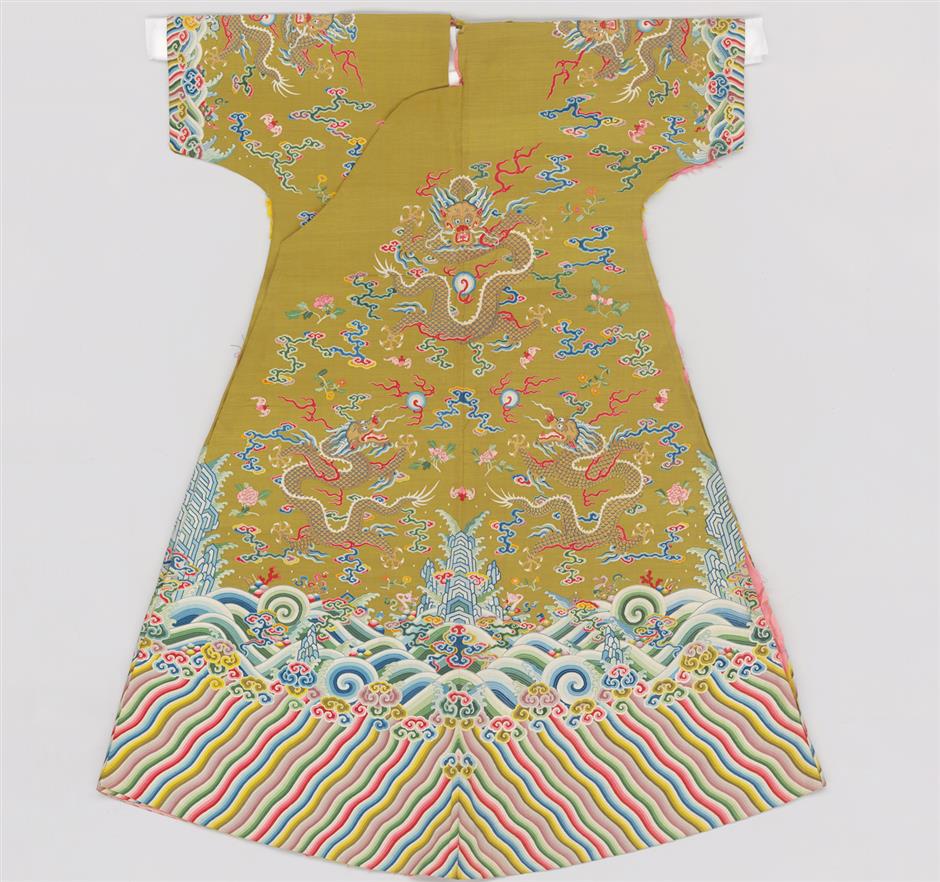 Also, documents from the ancient Qing Dynasty imperial textile and dyeing department show that the raw materials used to make the dyes probably came from the area in the south of the lower reaches of the Yangtze River.

Yellow was another vital color in royal garments for ceremonies and rituals. The ancient archives record that yellow was mainly produced in five different shades. Craftspeople adjusted the proportions of local plants in production to create different hues, including huangbo (黄檗), huaizi (槐子) and huanglu (黄栌).

A small yellow pillow ornamented with auspicious floral patterns is on display. It was used for pulse-taking, the most frequently used method in traditional Chinese medicine to diagnose disease. Patients put a hand on the pillow, and the imperial physician took their pulse. Since blood is circulating in the vessels all through the body, pathological changes in the whole body can be detected from the vessels. 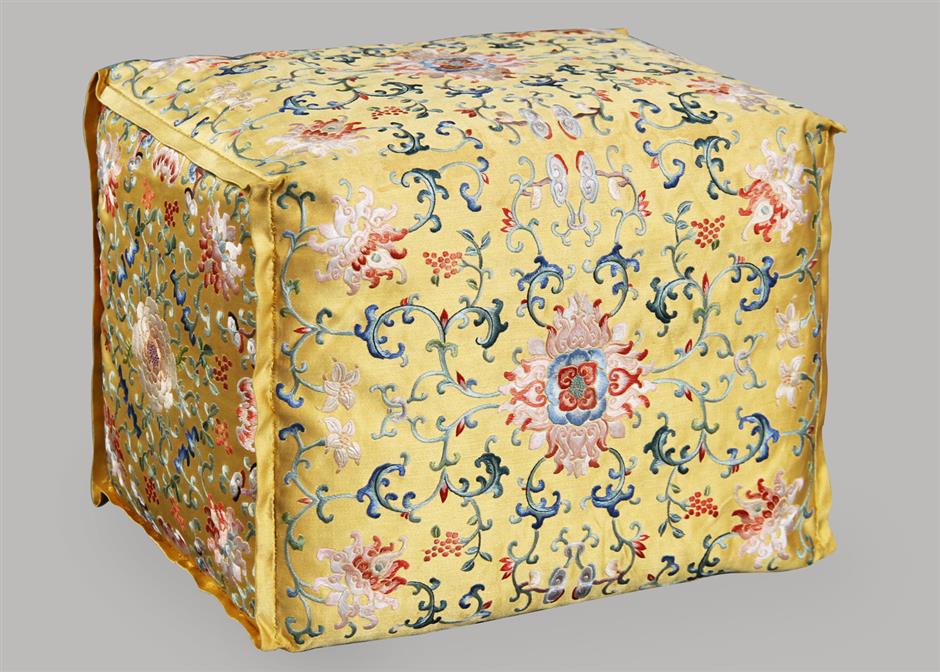 The yellow pillow ornamented with auspicious floral patterns was used for pulse-taking in traditional Chinese medicine.

During the Qing Dynasty, red represented the sun and fire. The emperor was always clad in red gowns to worship the sun. Archives explain the raw materials for red dyes mainly came from plants and insects. Sometimes, minerals were used to enhance color.

The exhibition displays a crimson brocade with dragon patterns dyed using insects. In the mid-16th century, Spaniards discovered that the American cochineal – a parasitic insect that lives mainly in cactus – was widely used as a source of dye in South America. It was later spread to China during the Qing Dynasty and used as a pigment. 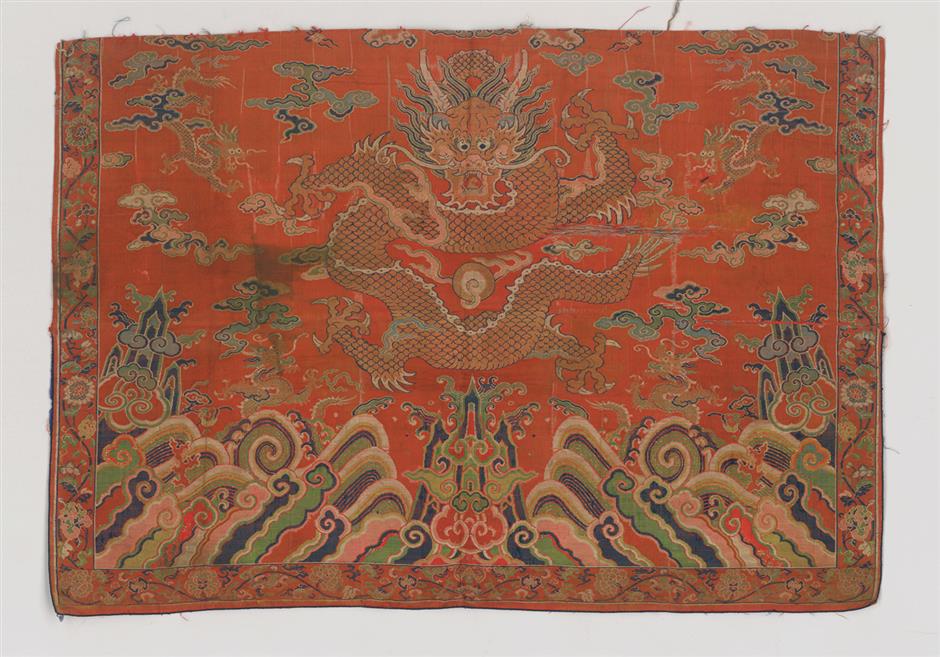 A crimson brocade with dragon patterns is on display.

Date: Through December 5, closed on Mondays