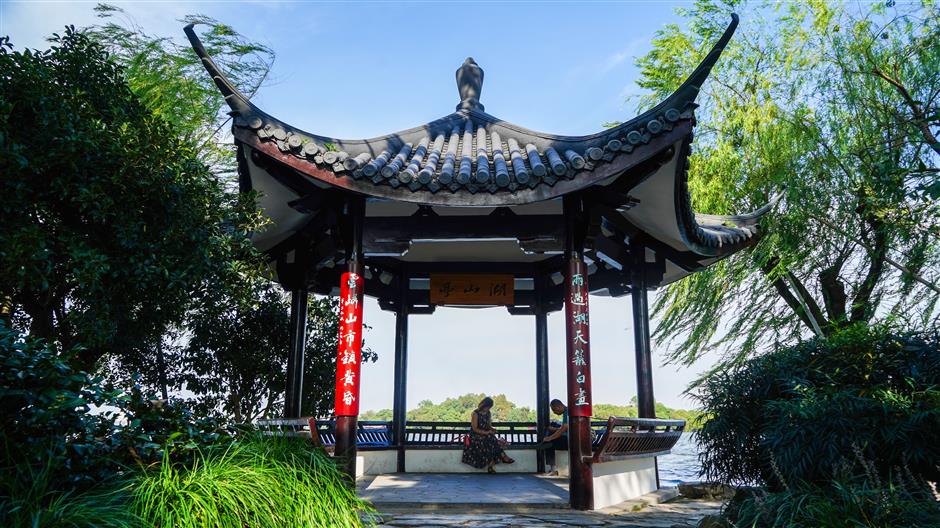 Ask Hangzhou locals to choose a road epitomizing the charm and elegance of the Zhejiang Province capital city, and most, without hesitation, will pick the Su Causeway.

The mere mention of the causeway makes people think of its lush roadside trees. The route links the northern and southern sides of the iconic West Lake and boasts scenic spots which attract a seemingly endless stream of visitors each day.

In an effort to enhance the charm of the causeway, the previous Su Dongpo Memorial Hall has been upgraded into a cultural park, with newly built porches, pavilions, slab-paved paths and arranged bonsais.

The park, located at the crossroads of the Su Causeway and Nanshan Road, also features exhibits devoted to the great poet (1037-1101). On the grounds behind the building, Su's calligraphy works and poems are carved on the walls and stone tablets. Now, people can linger over the lake's beauty and then learn about Su's life at the park.

Su was a writer, poet, calligrapher and statesman of the Northern Song Dynasty (960-1127). For many in the country, his poetry and writings were the summit of literature in the 11th-century China, while in the eyes of Hangzhou locals, it was Su who laid the foundations for the basic layout of the current West Lake.

At the beginning of the Southern Song Dynasty's Yuanyou era (1086–1094), Su came to Hangzhou as mayor.

During his tenure, Su was concerned with the suffering of people and left behind a legacy of many contributions to the city. These included dredging the West Lake and piling up the Su Causeway, which helped solve drought problems faced by farmers, winning Su much praise from locals. Today, he is still fondly known and remembered as the "old mayor."