A treasure trove of ancient Chinese culture and art 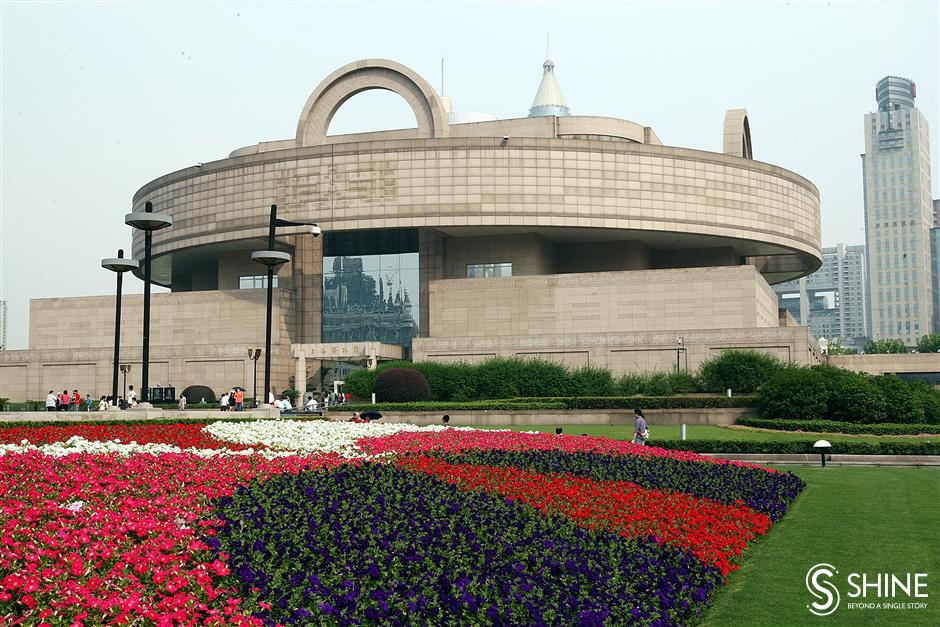 Shanghai Museum was built based on the ancient Chinese concept of "sky is round and Earth is square."

A tour of the Shanghai Museum will be a perfect approach for participants of the 9th World Forum on China Studies, which opens today, to better understand the origins and charisma of Chinese ancient art and culture.

As one of the top museums in China, Shanghai Museum has a collection of more than 1 million precious Chinese works of art and archeological findings. These vary from bronze, ceramics, calligraphy, painting to sculpture and oracle bones. Among them,140,000 are graded as national treasure.

Even the architecture of the museum itself is "a piece of art."

Following the traditional Chinese concept of tian yuan di fang or "sky is round and Earth is square," the shape of the museum, when viewed at a distance, resembles an ancient bronze vessel.

Established in 1952 and relocated to the People's Square in 1996, the museum now has 10 permanent art galleries, three special exhibition halls and four rooms for donated antiques, all encircling a spacious cylindrical atrium.

"An Everlasting Spring: The Art of Painting and Calligraphy in Shanghai" is a highlight exhibition currently running at the museum.

The title of the exhibition comes from the name of an ink-wash painting created by Liu Haisu (1896-1994) 1956 together with other 12 artists.

This artwork, which is also displayed at this exhibition, was created to celebrate the 35th anniversary of the founding of the Communist Party of China.

As one of a series of exhibitions at the museum in celebration of the 100th anniversary of the founding of the CPC, the name echoes Shanghai's efforts to promote haipai (Shanghai-style) and Jiangnan (regions south of the lower reaches of Yangtze River) cultures. 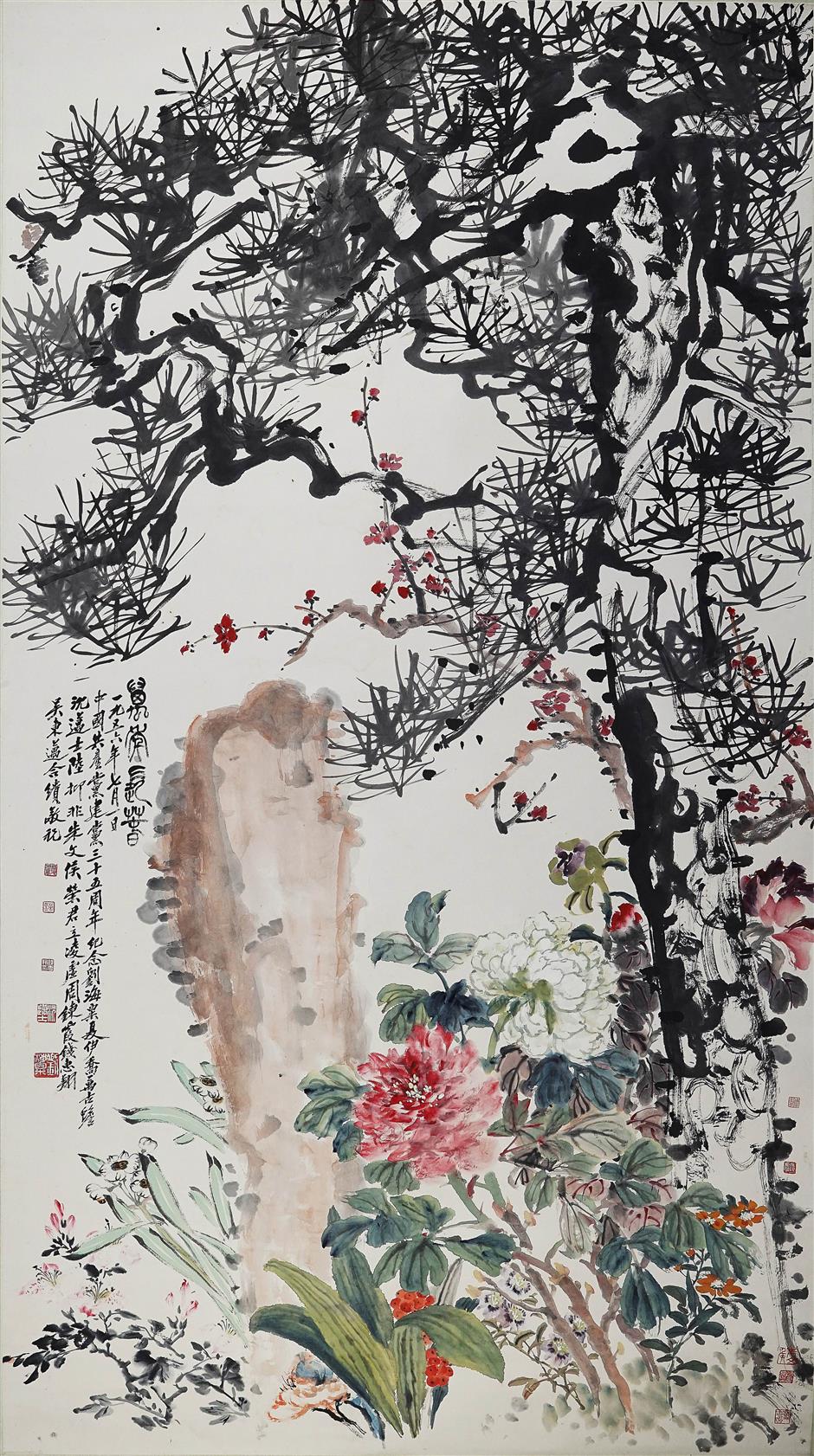 "An Everlasting Spring" was created by Liu Haisu in 1956 together with other 12 artists.

The exhibition, the first academic attempt to systematically sort and study Shanghai calligraphy and painting, selects 146 pieces and sets of artworks created over more than 1,000 years since the Three Kingdoms Period (AD 220-280).

The exhibition intends to chronologically review the accomplishments of Shanghai calligraphy and painting in a comprehensive and systematic manner to examine their status and influence in art history.

It also explores the artistic features of Shanghai calligraphy and painting of the past 1,000 years in terms of its profundity, creativity and openness. This will help viewers understand the urban spirit and traditional intellectual origin of the city.

Archeological objects have already proved that the origins of the civilization of Shanghai date back 6,000 years, and the metropolitan today began as a fishing village in the 11th century.

This exhibition reveals that Shanghai has nurtured a cluster of renowned Chinese artists both in painting and calligraphy. Some of the works in the exhibition are unveiled to the public for the first time.

"Look at this map on the wall," said Lin Lizhong, curator of the exhibition. "It includes the masterpieces of painting and calligraphy in the past dynasties where they were created in the different areas and periods of Shanghai."

Dong, born in Songjiang in the city's suburbs, has been widely recognized for his leading role in the establishment and innovation of Chinese literati paintings. His influence lasted for nearly four centuries. Several of Dong's ink-wash paintings are showcased at the exhibition.

In the eyes of many, the depiction of Shanghai landscapes is almost an empty chapter among ancient artists, perhaps due to the lack of impressive mountains and rivers here. However, a painting titled "Seeing Off a Friend by the Dian Lake" created by Li Sheng from the Yuan Dynasty (1271-1368) shows a rare ancient landscape of Shanghai.

Stretching in front of the viewers are the extended mountains lined with trees and hills. A small river zigzags in between.

It is hardly convincing that what's in the painting is the Dianshan Lake in today's Qingpu District, because the landscape is so different from the existing vast lake scene.

Was there a geological accident or did it come from the artist's own imagination?

According to curator Lin, Dianshan Lake during the Yuan Dynasty was still quite wide and demanded a whole day to cross by boat, as recorded in historical materials. So Li painted "an unreal landscape," or to be exact the scenery in his mind.

"Seeing Off a Friend by the Dian Lake"

Another highlight of the exhibition is "The Garden of the Winding Stream" created by Wen Jia from the Ming Dynasty (1368-1644). The painting features the scene of an ancient vineyard, which can still be found today on Lincang Road in Minhang District.

"This exhibition, as planned previously, should have been closed last month," said Yang Zhigang, director of Shanghai Museum. "But visitors showed a great passion and interest, so we are prolonging it so that more people can appreciate the real beauty behind these paintings and calligraphy works that are related to Shanghai."

"The Garden of the Winding Stream"

In order to create an immersive experience for the participants of the World Forum on China Studies, who will visit the Shanghai Museum tonight, the museum and the Shanghai Chinese Orchestra will stage a special program combining ancient melodies with the antique visual art in the exhibition hall.

Musicians dressed in ancient costumes will play traditional Chinese instruments such as bamboo flute and Chinese zither in front of the ancient paintings.

Visitors, as if stepping into a "time tunnel," will appreciate the melodies together with the aesthetics of Chinese ancient art.