In what is being seen as a major boost to women translators in the country, three women took the top honors at the prestigious Prix Fu Lei awards at the Fu Lei Library in Zhoupu Town of Shanghai's Pudong New Area recently.

The Prix Fu Lei, which was established by the French Embassy in China in 2009, recognizes the works of writers, intellectuals and publishers in introducing French essays and literature to the Chinese readers. It was set up in memory of the famous translator Fu Lei (1908-1966), who translated some of the earliest French literary classics into Chinese.

Chaired by French sinologist Guillaume Olive this year, the Prix Fu Lei jury received 47 entries – 35 in the Essay category and 12 for the Literature prize. 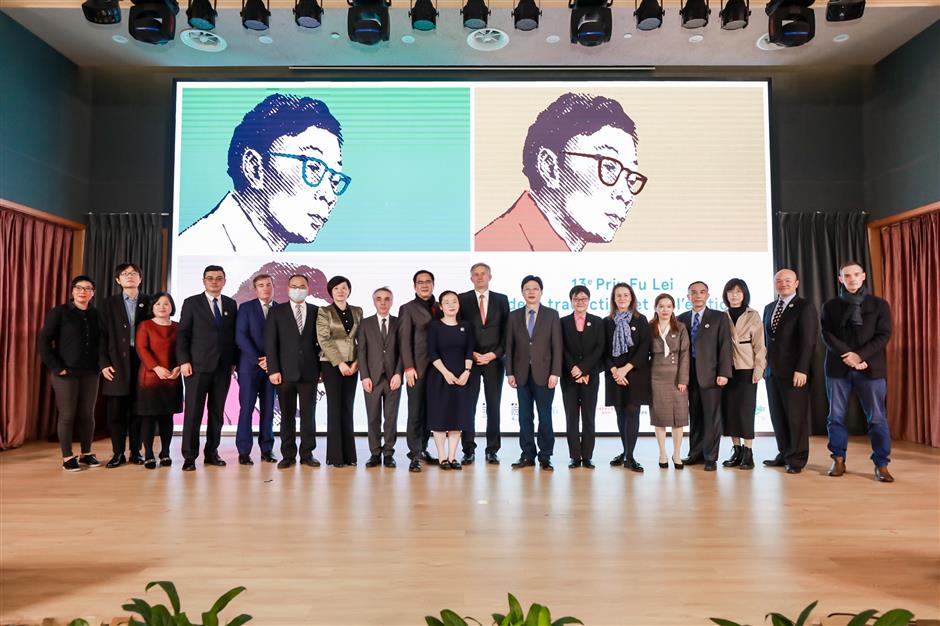 French Ambassador to China Laurent Bili (ninth from right) poses with the winners of the 13th Prix Fu Lei and members of the jury at the awards presentation, which was held at the Fu Lei Library in Zhoupu Town in Shanghai's Pudong New Area.

Zhang Wen's translation of Antoine Berman's "The Experience of the Foreign: Culture and Translation in Romantic Germany" won the Essay Award, which carries a cash award of 4,000 euros (US$4,528).

Published in 1984, the book is the first authoritative analysis of the theory of translation in German Romanticism, an intellectual movement in German-speaking countries in the late 18th and early 19th centuries.

"In a manner of archaeological research, Berman's book discloses to the readers the reason why the translator is never free in the practice of translation, addressing the questions that arise even today," said Yu Zhongxian, a member of the jury panel and a professor of French literature at the Chinese Academy of Social Sciences.

"Precise and beautiful, Zhang's translation showcases a translator's ability to deal with the complexity of the original text, which, by itself, proves the universal value of translation as a means of self-enrichment," Yu said, reading from the jury's statement.

Zhang, 32, who hails from Shandong Province, now teaches French at the School of Foreign Languages at Peking University. She said, "The book makes me see translations not as subservient to the original, but rather as an experience that can enrich the target language – in terms of borrowing and reflection."

"For example, the term 'can't agree more' has come into the Chinese language to mean '100 percent agreement.' But literally, it sounds absurd in Chinese. From being unacceptable to being accepted by today's readers, the translated usage stimulates a new way of thinking," she said.

Zhang said she does translation to further her understanding and experience of French in the realm of language, thought and philosophy. She has translated works by French authors, such as Michel Bussi and Marc Levy, and started translating Berman's book way back in 2016. 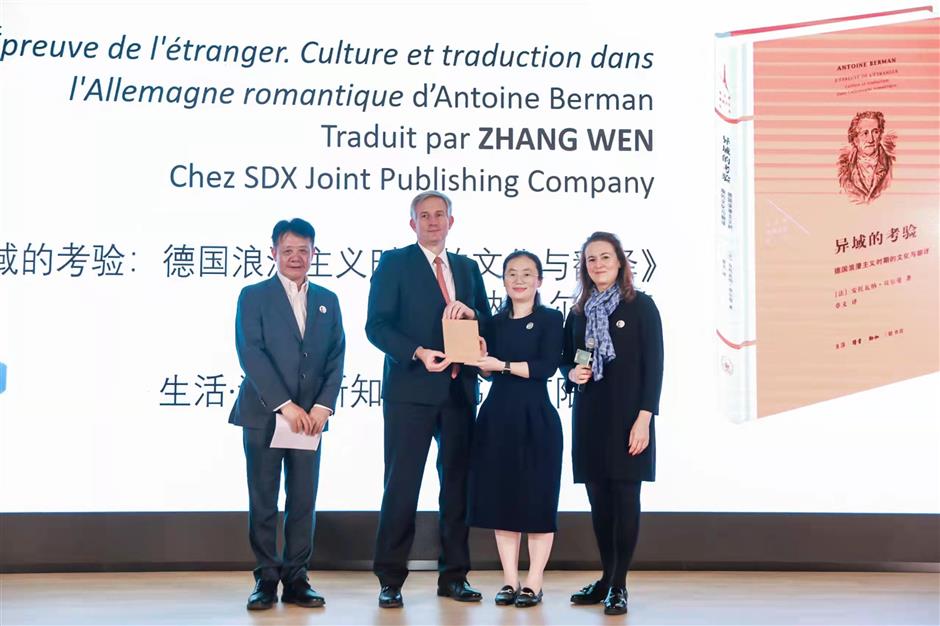 Zhang Wen (second from right) won the Essay Award. Her translation of Antoine Berman's "The Experience of the Foreign: Culture and Translation in Romantic Germany" is published by SDX Joint Publishing Company.

Huang Yaqin from Shanghai scooped the Literary Award (4,000 euros) for her work on "The Boy" by Marcus Malte, while the Starup Award went to Wang Xian, a Shanxi native, who walked away 1,500-euros richer. Wang translated Didier Eribon's "Returning to Reims."

Malte's "The Boy" is a history reimagined from a contemporary perspective through the eyes of a nearly feral child from the French countryside as he joins society and plugs into the torrid events of the first half of the 20th century.

"Malte's boy has experienced war, love and eventually death. His adventures take him around the world but he has no name. His life is like a mirror that reflects the life of every one of us over the long course of human history," said Huang, who worked on the translation for nearly a year.

The original French won the Prix Femina in 2016.

"Oscillating between poetry, myth and legend, including one encounter with poet Blaise Cendrars who joined the French Foreign Legion at the outbreak of World War I, Malte never fails to surprise; and it is a delight to read," she said.

An editor at the Shanghai Translation Publishing House, Huang has been doing translation as a hobby after finding it an effective way to enhance her own editing skills and reading abilities.

Among the nearly 20 books she has translated to date, Malte is perhaps the only living author with whom she communicated, seeking answers on the ambiguities during translation. She found the communication with the author both encouraging and beneficial.

"For me, translation is like decoding. Feedback from the author ensures that the content is accurate and read-worthy, rather than lost," Huang said. "You see clearly the craft of writing behind a repertoire of characters, stories and emotions." 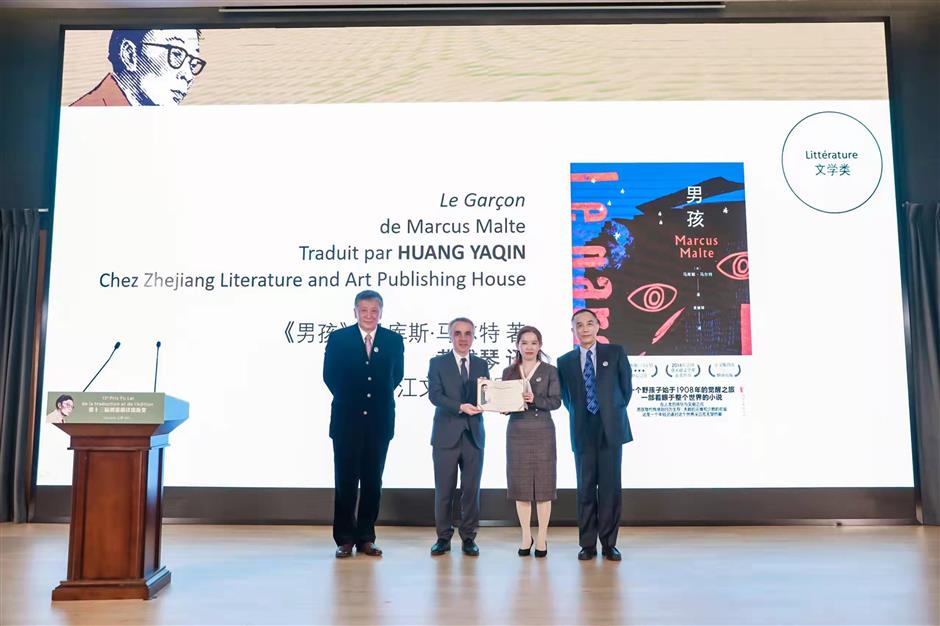 Huang Yaqin (second from right) from Shanghai scooped the Literary Award. Her translation of Marcus Malte's "The Boy" is published by Zhejiang Literature and Art Publishing House.

Wang picked up an award in her very first effort with "Return to Reims" by French philosopher and sociologist Didier Eribon. The 31-year-old is currently doing her doctoral degree at the School of Journalism and Communication at Peking University.

"Eribon, with his gay identity, has received wide recognition as a public intellectual in France. The book was written after the death of his father in 2009 when he returned to his hometown of Reims and rediscovered the working-class world he had left behind 30 years earlier," said Wang, who had majored in French at Heilongjiang University.

"His account of the difficulties he faced as he advances through school is convincing and moving, which I can relate to in a broader sense, and analyze the issues, such as the meaning of class and social justice, in today's society."

"A memoir and reflective work of Eribon, the book of prose takes readers on an inner adventure of the soul, exploring issues such as social stratification, the role of school education and the shaping of individual identity in a given culture," introduced Duanmu Mei, a jury member, of Eribon's work.

"Wang's translation remarkably conveys the autobiographical style and rigor of the author's academic analysis, thanks to her brilliant linguistic skills and her passion for French philosophy," Duanmu Mei said, reading from the jury's comment on Wang's efforts.

Dong Qiang, an author, translator and professor of French literature, has been promoting and engaged in the Prix Fu Lei program for years. Running into its 13th year, the program has encouraged the translation and publication of French classics and contemporary works into Chinese.

"A lot of teachers at the (Peking) University complain about how translation is unappreciative in China. But Prix Fu Lei is an encouragement. That is why we decided to continue awarding the prize despite the difficulties faced in 2020 due to the COVID-19 pandemic," Dong said.

According to Dong, books have always been one of the important media for cultural exchanges between China and France.

In recent years, China has become the biggest partner of France in the global publishing industry.

The Starup Award was launched in 2013 and encourages young translators. In addition, the 2019 program's regulations require that titles submitted to the jury must have been published within the past year.

"Among the translators who signed up for this year's Prix Fu Lei, nearly half of them were born in the 1990s, with the youngest translator just 28 years old, which means there are youngsters following in the footsteps of Fu Lei," said Dong.

Dong says that compared with previous years, there were more works in the fields of humanities and social sciences than in literature.

"We aim for a complete map of France for Chinese readers, covering all aspects of life … arts and science, public affairs, politics and history," Dong said. 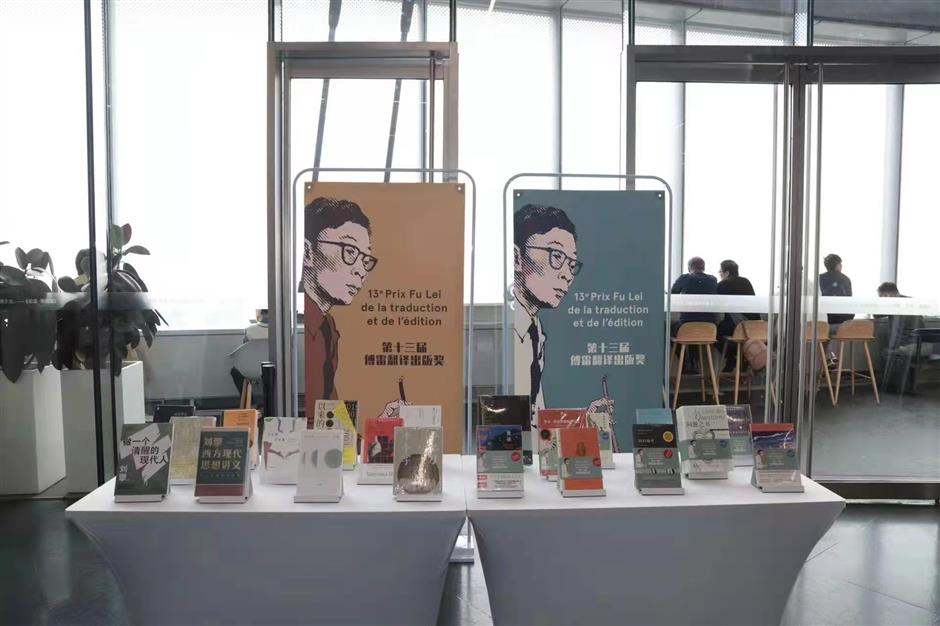 The books of the nominees of this year's Prix Fu Lei are on display at Duoyun Books on the 52nd floor of Shanghai Tower.

Author Sun Ganlu, a guest of honor at the awards ceremony, pointed out that since most of the translated books are up to date, "we can therefore observe the changes in the French intellectual and literary circles of today and issues of concern."

Yan Bo, deputy director of the Pudong New Area, congratulated the translators and publishers on behalf of the kinsmen from Zhoupu, where Fu Lei, also known in Europe as Fou Lei, spent most of his teenage years before he left to study literature and art history in Paris at the age of 20. He passed away at the age of 58 in Shanghai.

Yan also thanked the translators for their efforts in passing on the torch of the Fu Lei's Spirit, which "serves as an inspiration to us all – in his devotion to art, unyielding perfectionism, and faith in humanity."