Sitting on a very strategic passage along the Great Wall in north China's Shanxi Province, Yanmen Pass has been the choke point that blocked northern nomads from invading central China for centuries.

In a superior defensive geographic position between high mountains, Yanman Pass has witnessed thousands of bloody battles since the Warring States Period (476-221 BC). Because no warbirds could fly over it from the north to south, the pass earned its name "Wild Goose Gate."

Its 5-kilometer-long protective wall was built along nearby rolling hills. Not far away, three additional large stone walls and 25 small walls were built as complementary barriers. 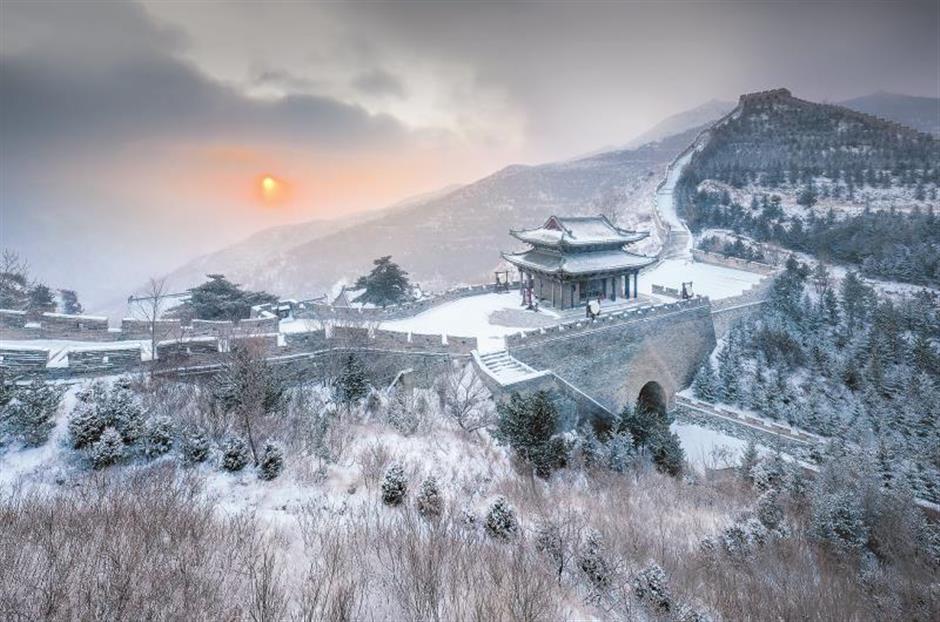 Yanmen Pass, along with Ningwu Pass and Pianguan Pass, is a fortified gatehouse along the Great Wall of China in north China's Shanxi Province.

The northern hill was home to military camps during the Ming (1368-1644) and Qing (1644-1911) dynasties, while drills were conducted to the southeast. The overall defensive system was topped off with lookout posts, trenches, trapdoors, fortresses and beacon towers.

A few steps away is a short section of Baicaokou, one of the best-preserved parts of the Great Wall, 5,033 meters long and 6 to 8 meters high. Beacon and watchtowers are situated about every 120 meters.

A stone plaque set up in 1772 is one of the country's few ancient traffic signs that still exist today. During the heyday of the Qing Dynasty, roads near Yanmen Pass were often congested with heavy traffic, which led to disputes between businessmen and locals.

The local government erected the lane-dividing sign that regulated all the vehicles from the south traveling on the eastern lane, while those from the north traveled on the western lane.

The tablet is emblematic of what a busy trading center the pass was at the time.

A monument on the pass is dedicated to a local official surnamed Ma who was in charge of guarding the pass during the Ming Dynasty.

A tiger would often come down from the hills and attack residents, so Ma's younger brother volunteered to kill the animal. However, he ended up being killed by the tiger.

Ma decided to carry on the mission and eventually killed the big cat under the pass. Locals built a roadside monument inscribed with "the place where Ma killed the tiger," thanking him for his heroic deed. His younger brother was given a hero's burial next to the monument.

Yunji Spring was a famous scenic spot in the Yuan Dynasty (1279-1368) with a beautiful kiosk nearby. It was once mentioned in an official's poem during the Qing Dynasty, but somehow the spring disappeared.

It was rediscovered in 2009, though the water level was lower than it was said to be centuries ago. Today, it's considered a must-see for people who visit the pass.

The pass was also a customs gate for Wang Zhaojun, who lived over 2,000 years ago as a lady-in-waiting in the court of Emperor Yuan of Han (BC 75-33).

At the time, China's northern borders were frequently contested by the Xiongnu, a tribal nomadic group in what's known today as Inner Mongolia.

In the year 33 BC, Huyanye Chanyu, a Xiongnu chieftan, threatened to pass the Great Wall and invade the Han territory.

In order to defuse the crisis at the lowest possible cost, Zhaojun entered into a political marriage with Huhanye Chanyu and worked as a Xiongnu queen to build friendly ties between the Xiongnu and the Han Dynasty.

Zhaojun is known as one of "four great beauties" of ancient China – women whose extraordinary looks and influence over rulers changed the course of history. She is said to be so beautiful that upon seeing her, geese would fall stunned from the sky.

The historical anecdote "Zhaojun Goes Beyond the Great Wall" has been adapted into various operas, novels and dramas over the centuries. She prioritizes country over self, and serves at great cost to her happiness.