British businessman Chris Attwell was literally snookered into making a home in Shanghai.

The 51-year-old was originally based in Dubai for 10 years where he worked as a business manager for The Landmark Group, one of the largest retail corporations in the Middle East.

During the last two years of that decade in the United Arab Emirates, Landmark’s business expanded even further into Asia, meaning he was a frequent visitor to China.

And it was on one of those work trips to the ever-expanding busy metropolis that he got snookered.

The Englishman, originally from Crewe in the northwest of England, was enjoying a quiet drink in a Shanghai bar when he was challenged to a game of pool by one of the customers.

The then 38-year-old, a skilled artisan on the green baize in his own right, had no reason to believe he would lose. But his heart quickly sank, along with his opponent’s pool balls, as the challenger cleaned up to win the game.

“It’s been the same ever since,” quipped Attwell, about the woman who rattled his balls, won his heart and eventually became his wife — Fujianese born, Candy Huang. “She still beats me now. I play to clear my bar bill and Candy plays for 100 yuan. I rarely clear my bar bill and usually have to cough up 100 yuan.”

As their relationship grew stronger, he couldn’t bear to be away from Candy so he quit Dubai and moved his base to Shanghai to work with Mothercare, a British based retail company specializing in baby products. And at the same time helped Candy to run BnC, a popular bar with both Chinese and expats in Jing’an District. He even adopted a Chinese name “泰山” (Taishan), a famous mountain in China. 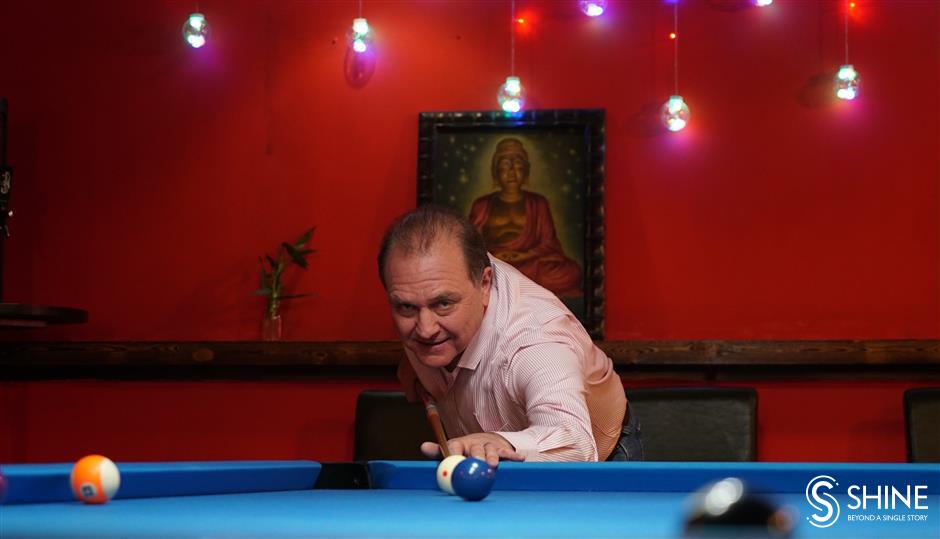 British businessman Chris Attwell ready to pot in a game of pool at BnC, a bar run by his wife, Candy, in Jing’an, Shanghai.

The couple have been married for three years now and in July last year their first child, Jack, was born.

Taishan believes the secret to living in Shanghai is to lead a rich life with friends from different nationalities.

“Mix with everybody,” he said. “I see a lot of people coming to the city and they just stay in close group of friends. If you do that, you will miss what Shanghai and its culture is all about.

Q: Tell us your first impression of Shanghai?

A: Hmm, I sort of grew into Shanghai and China as well. Within the first couple of days, the Shanghai Metro taught me a lot about the city. In the UK everyone holds onto a rail as the train sets off to avoid falling over, but here, nobody held on apart from me. Suddenly, everyone stepped back and banged into me. I couldn’t understand it. I thought, ‘why couldn’t people hold on, like we do in the UK?’ After three days I gave up and didn’t hold on. The train set off, I stepped back, everyone else stepped back and voila! Nobody banged into me. It was my first lesson that in this part of the world people have a different way of doing things both in business and personal life, we all have the same goals but a different way of achieving them.

Q: What made you choose Shanghai as your destination?

A: It was mainly work. I knew I could travel around Asia comfortably from Shanghai. And because it has such a good transportation hub, it was easy to set up a retail business. But in 2008, there was the global economic crash, so we closed the businesses and I was seconded back to my base in Dubai. After three to four weeks of being back, I realized I had fallen in love with China, or more correctly, fell in love with a young Chinese lady who is now my wife.

Q: How did you meet people and make friends in Shanghai?

A: It was difficult 13 years ago. There weren’t as many expats as we have now. There were only a few bars where you could meet people, so, it was difficult. It’s a lot easier now as the city is much more cosmopolitan and we have things like WeChat to help us along.

We had a party at BnC last week and there were more than 10 nationalities in the bar. We get a wide range of weird and wonderful people in our bar. There’s an Aussie regular, who insists playing the song “Down Under” on the bar music system. He only eats Vegemite sandwiches. There’s a 70-year-old Brit, who has just re-found the love-of-his-life after 40 years apart, and a strange lady who paints her face like she’s in Adam and the Ants. It is fantastic. There was such an eclectic mix of personalities all getting along. This is one of the great things about Shanghai — cultures mix and everyone has a story to tell.

My father is 83 years old. He loves China and travels here every couple of months from the UK. One time he was sitting in Jing’an Park and a Chinese man came and sat next to him. They were both communicating with each other, even though the old Chinese man couldn’t speak English and my father couldn’t speak Chinese. They somehow spent the whole day together, ending the day having dinner as new friends.

In the UK, and a lot of other European countries, when you age, you are treated as being old and useless, my father has a very different view of Shanghai, he feels 20 years younger when he is here and treated with more respect. That’s really impressed me. I think people are treated more equally in Shanghai. It doesn’t matter about age, nationality or sexuality. 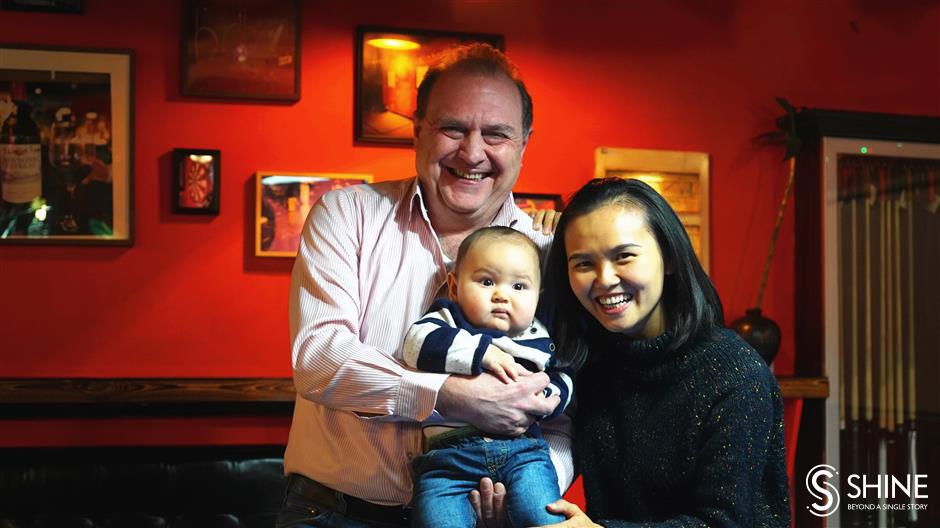 Little Jack, 7 months old, sits up for a family photo with mom and dad.

Q: Any special experiences during your stay in China?

A: One interesting story is our wedding. Of course we had to do the two stages of the wedding. We had to do the legal one in Fujian, which was interesting, and very different from what I expected. I sort of bent down to the window hole (at the registration office) and the woman behind the window asked: “Do you want to get married? Have you got your papers?”

“Have you got your pictures?”

“There you go, you’re married!”

I burst out laughing. I thought, ‘wow, that’s a bit different from the UK.’

And then we had the ceremonial marriage, which is traditional as well. We tried and did things half in Chinese and half in English so we hired a bilingual Master of Ceremonies for the mix of guests. But during the ceremony, the MC kept getting my name wrong. So I took the microphone from him and fired him on the spot. I took over as MC at my own wedding. It was really fun.

Another time my wife and I went to the Ice Festival in Harbin. I’ve been to more than 50 cities in China now. Harbin is one of my favorite places. Before we went, my wife said we should get the right cold weather clothes to keep warm. Me, being English declined, insisting I would be OK. I thought I knew it all.

As soon as I got off the plane, it was so cold my eyelids froze to my eyeballs! Another lesson in things being a little different here and a lesson of listening to my wife. I’d say that was a special experience in my lifetime.

Q: What is your advice to people moving to Shanghai?

A: The first one would be, stay longer than six months. Because I still believe even today it takes you six months to fully understand Shanghai or understand China. Don’t give up quickly. It is a great place.

What does Chris want to say to himself in the future? Have a look! Chris is sending a message to himself 10 years from now!