Livestream ads: 'Hi! Have I got a deal for you!'

Imagine hosting a livestreaming broadcast to peddle merchandise and calling one product brand by the name of its major competitor.

Embarrassing? Of course. But that doesn’t stop the emergence of hosts who are called “online influencers.”

This growing legion of online hawkers includes celebrities, opinion-makers, business executives and even normal shop assistants — anyone who can parlay a name or some level of expertise to attract a big online audience.

Luo Yonghao, the host who bumbled the brand name, has accumulated about 48 million viewers during his recent debut in live broadcasting, despite many hiccups in his presentation.

This trend may continue long after the epidemic abates, changing the whole landscape of retail marketing and the digital economy in China.

Luo came to his new role via the information technology sector. He left a leading role with the smartphone brand Smartisan — with the company and himself heavily in debt — and earned a reputation as the “best talk show actor in the IT industry” after his many appearances at both online and offline events.

But as a newbie, Luo stumbled at the start. Hosting a three-hour livestreaming broadcast on Douyin, or TikTok known overseas, he appeared unfamiliar with the products he was supposed to be promoting and constantly had to check details with assistants while on air.

The last straw came when he called one projector product by the brand name of its major rival.

“I am still a beginner here, and I am learning,” Luo sheepishly admitted on air.

Despite the fumbles, Luo came out pretty unscathed. The broadcast attracted 48 million viewers, a record high in its category, said Douyin. And Luo and his team managed to sell 110 million yuan (US$15.7 million) worth of products, including pens, HD projectors, robot cleaners, chocolate, ice cream and even crayfish.

Coping during the COVID-19 outbreak, many companies, from carmakers and food markets to gold stores and tourism operators, have eagerly embraced livestreaming broadcasts to sell products and services. People forced to stay at home during the viral outbreak provide a captive audience.

This trend may be a game-changer in marketing, said Wu Lianfeng, associate vice president and chief analyst of market research firm IDC China.

“All brands should rethink the methods they use to reach customers and explore new digital channels like broadcasting,” Wu told a conference broadcast online.

In March, carmakers Land Rover and Cadillac were testing those waters. Their broadcasts on Douyin surpassed 158,000 and drew more than 58,000 comments.

Laomiao Group, a Shanghai-based gold and jewelry store chain, recruited its saleswomen to promote its products through online broadcasting after it was forced to close its shops or shorten hours.

On average, each broadcast has brought in about 30,000 yuan in sales, including one that earned 130,000 yuan. Laomiao is now considering making regular online broadcasting as part of its business strategy, even post-COVID-19.

In cooperation with Alibaba’s Tmall, Xinghualou sold about 130,000 boxes of the dumplings within 10 seconds of its online sales pitch. A local newspaper called it an example of the integration of traditional brands and the digital economy.cor 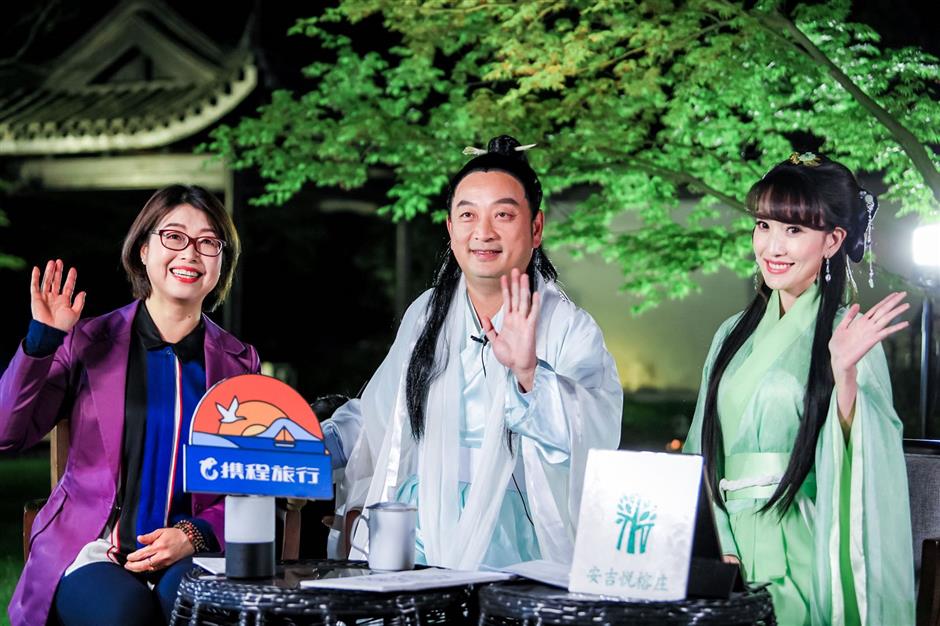 Liang’s livestreaming appearance attracted 1.2 million viewers and specifically promoted discounted tourism products in the city of Huzhou in Zhejiang Province. It generated transactions valued at 26.9 million yuan within an hour of broadcasting.

A vice mayor of Huzhou joined in the broadcasting, offering visitor coupons backed by the local government.

Liang’s previous livestreams featured tourism in the Hainan Province city of Sanya, offering overnight stays in luxury hotels, and in the Guizhou Province city of Xijiang. Each of the pitches brought in about 10 million yuan of business.

Tourism has been one of the industries most heavily hit by the epidemic.

Ctrip’s revenue is expected to fall by up to 50 percent in the first quarter, the company previously announced.

The new wave of livestream marketing builds on a trend already underway in China. Many broadcast hosts have already become rich celebrities.

The hosts usually receive commissions on each deal they secure. Among those who have cashed in on the phenomenon is Li Jiaqi, dubbed the “Lipstick King,” famous for his testing of lipsticks online.

Wei Ya, who sells products on Alibaba’s Taobao, and Li have enjoyed huge popularity and record-breaking sales. Their broadcasts sell a wide range of goods, from cosmetics and clothes to film and concert tickets.

Luo’s broadcast is going beyond traditional categories of beauty products and food. He is hawking high-priced products, such as a home theater projector costing almost 5,000 yuan.

“Luo’s debut means a lot for the genre, beyond just sales and viewer numbers,” said industry observer Zi Chao. “With his identity as a celebrity, Luo has brought a new level of sales into the mainstream. Now more brands will want to try it out and more consumers will want to buy.”

Douyin, a major platform for livestreaming, had over 400 million users in China at the start of the year. No doubt its numbers are growing. A Shanghai-based website editor identified only as Mio said she registered on Douyin just to watch Luo’s broadcasts.

Many brand companies tried to secure “showtime” in Luo’s debut broadcast. Even if sales might be limited, they sought to seize an opportunity to lift the profile of their products, analysts said.

Such broadcasting is no longer just a mere production tool for online sales or distribution. It has become a prerequisite for business integration, a QuestMobile report said.

To be sure, livestream marketing is not without its problems. After Luo’s broadcast, some buyers complained about the freshness and packaging quality of the crayfish they bought.

Broadcasters are not e-commerce professionals or websites with strong logistics and after-sales backup, said a senior executive of JD.com, one of the top China online retailers.

Another controversial point is price — a high-priority factor with consumers.

Luo claimed on air to offer the “best prices” for all the products promoted in his broadcast. Not all buyers agreed.

That’s because JD temporarily cut the price of the ice cream by more than half during Luo’s broadcast, before restoring the product to its original price the next day.

“I like watching food broadcast programs,” Mio said. “But I will choose where I buy products based on price. It takes just minutes to compare prices.”

Luo said he is donating 3.6 million yuan of his broadcast income to fruit farmers in Hubei Province, the region hardest hit by the epidemic in China. He conducted second broadcasting show last Friday with products including fruits from Hubei.

“Cheers for Hubei!” said Luo on its Weibo account, which has 16.7 million fans.

However, the visitor traffic nosedived by nearly 80 percent during his second broadcasting on Douyin, which featured oranges from Hubei and cars with huge discounts.