A local aircraft mechanic at the Pudong airport has gained tens of thousands of followers on social media by teaching English to colleagues in a clear British accent.

Zhang Jianhai, 32, who has been working with a Chinese airline for over a decade, has amassed an online following of 50,000 since he posted his first short video on his Douyin (known overseas as TikTok) account “grassroots mechanic” on August 31.

Wearing headphones and standing beside a passenger aircraft on the airport apron, Zhang described various aircraft parts in English and demonstrated how Chinese pilots communicate with foreign captains.

His strong British accent and powerful voice against the noisy backdrop drew compliments from followers, who variously described him as "China’s best English-speaking mechanic” or “an English speaker better than most college graduates.” 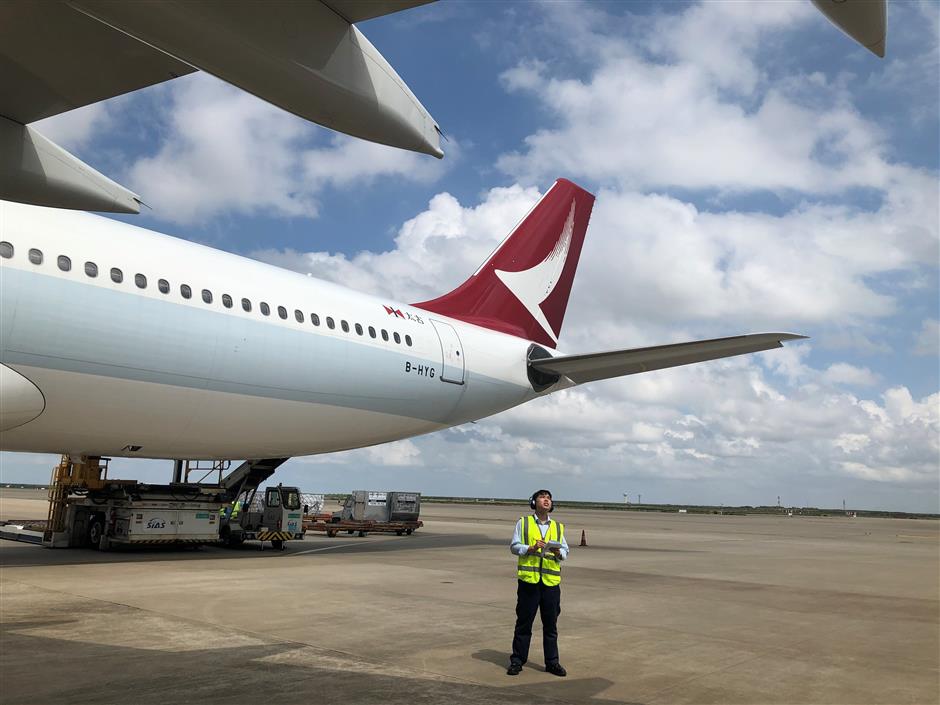 Zhang Jianhai checks an aircraft at the Pudong airport.

Zhang is self-taught in English. He said he spends most of his leisure time listening to BBC news, reading English-language newspapers and watching TV series from the US and UK. His favorite shows include the British-made “Downton Abbey” and “Sherlock,” and the US series “Game of Thrones.”

“I shut out the Chinese subtitles and imitate the actors speaking English, concentrating on the accent,” Zhang said. “There is no shortcut in learning English.”

Zhang’s initial impetus in starting his online project was to improve the English of Chinese mechanics and share with them his English-learning experience. Later, he told Shanghai Daily, his purpose expanded to sharing with the public the work of aircraft maintenance.

China’s civil aviation administration has stepped up English requirements for mechanics because most inspection and maintenance manuals of mainstream passenger jets made by Boeing and Airbus are written in English, he said. 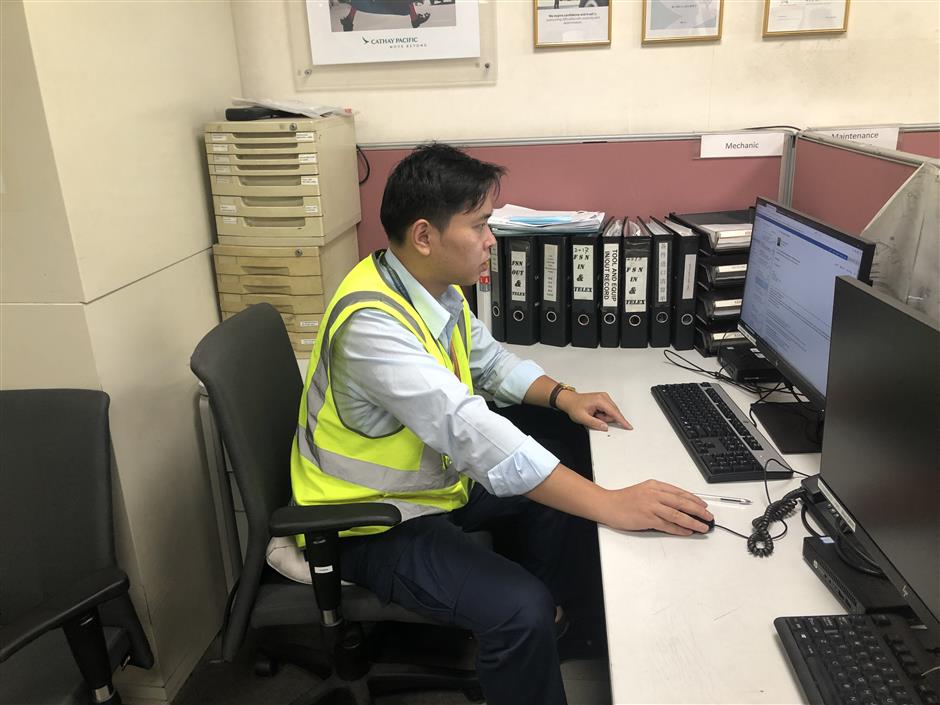 Zhang Jianhai prepares the content for his online English lesson.

Though many mechanics have acquired superior jet inspection and repairing skills, they can barely speak fluent English, especially senior engineers who started their careers before 1990, Zhang said.

To make it easier for senior colleagues, Zhang usually explains the terminologies of equipment on the airport apron and once posted a livestreamed communication between a captain and a mechanic before takeoff.

To his surprise, Zhang found that many online viewers were curious about aircraft mechanics as well as English-learning skills, so he expanded the contents of his posts.

“Our job is essential to flight safety but is unfamiliar to most passengers, who only meet flight attendants and maybe pilots sometimes,” he said.

In a latest post, which received over 2,300 “likes,” Zhang talked about the three major segments of his daily work: pre-flight duties, transit duties and overnight checks.

“I’d like to pay tribute to aircraft mechanics who work hard day and night for the civil aviation industry,” he said in the video.

He also introduced common equipment that travelers rarely see, such as the nitrogen bottles used for aircraft tires when the planes are berthed on the apron overnight, and the special pushback tractors used to push aircraft from the terminal gate before takeoff.

He has so far posted some 25 videos of about a minute and a half each.

“I keep every video short to avoid making audiences bored,” he said. “I also reply to every comment made online.”

Some online followers point out grammatical or pronunciation errors in the videos. Zhang said he welcomes the advice.

“Actually, I’ve never been abroad, so forgive me if I made any mistake in the videos,” Zhang told his followers. “I posted the videos not only to teach others but also to improve myself.” 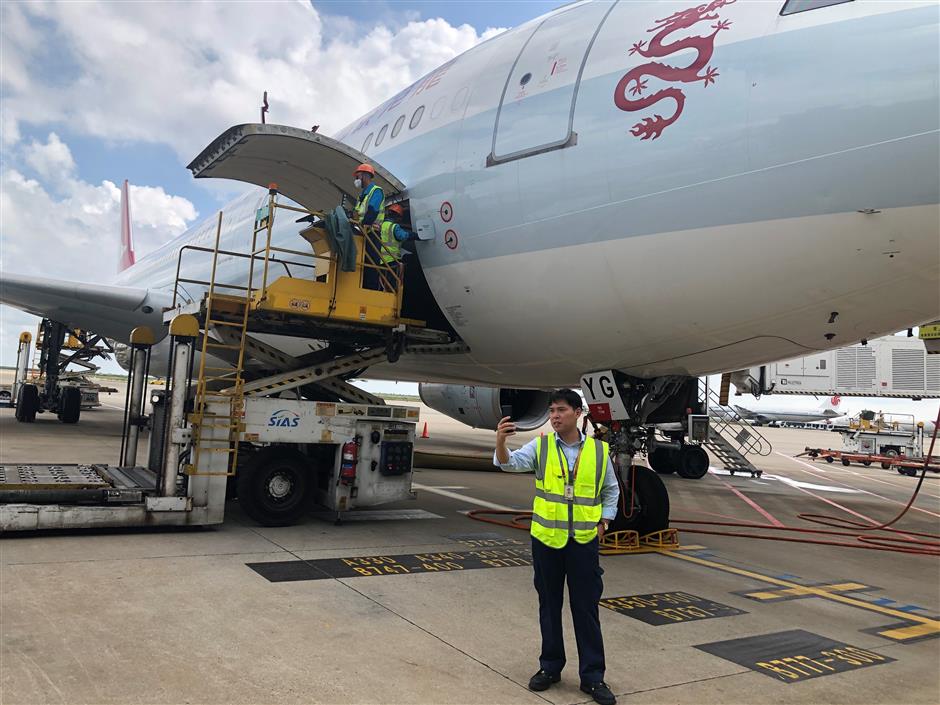 Zhang Jianhai records a short video beside a passenger aircraft during leisure time.

After graduating from the Civil Aviation University of China in the northern city of Tianjin about a decade ago, Zhang returned to his hometown Shanghai and began working as a mechanic on Airbus aircraft at the city’s airports.

He has often worked 12 hours a day and spent whole nights on the apron. Despite all these, his interest in learning English never abated.

“English study is just the same,” he said.

He never prepares the contents of his videos, instead preferring spontaneous talks that rely on his English-speaking ability.

“Thinking in English is very important to speaking English,” he said in a video. “Just speak and don’t be afraid of making mistakes.”

Despite the fact that his wife is now pregnant and he is busier than before, Zhang vows to keep updating his account regularly.

“I feel proud whenever a malfunctioning aircraft takes off again after I have fixed the problem, and I am happy to improve my English in tandem with online audiences,” he said. “Both missions are accomplishments for me.”

As the number of his followers keeps rising, Zhang said he plans to focus more on English learning.

“Though the aircraft repair manual will be in Chinese after the domestically developed C919 enters the mainstream fleet of passenger airliners, it will still be essential for Chinese mechanics to speak fluent, professional English,” he said. 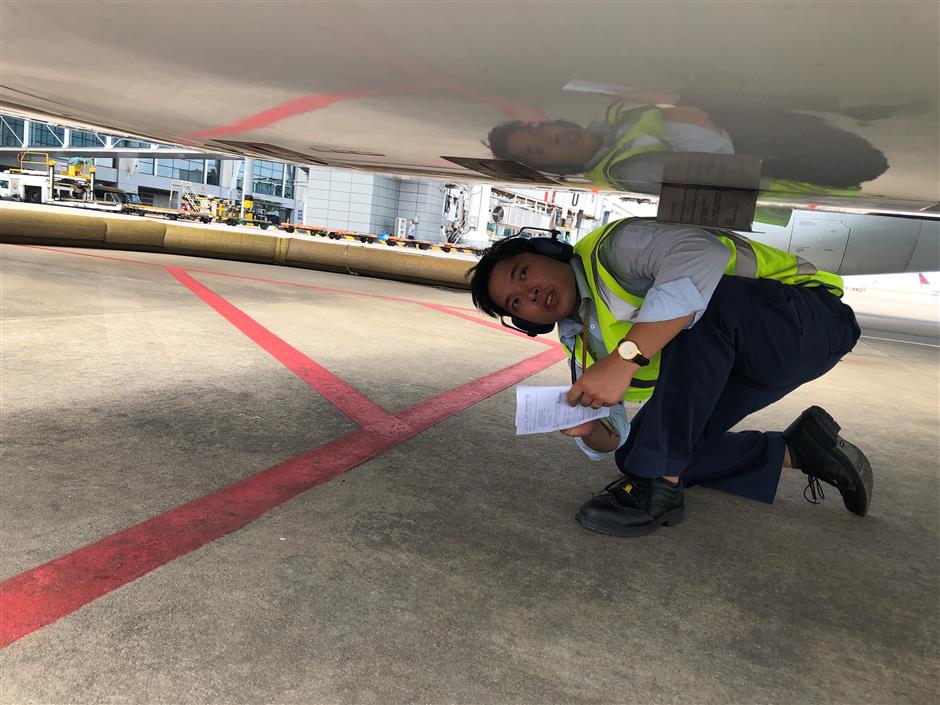 Zhang Jianhai checks an aircraft at the Pudong airport. 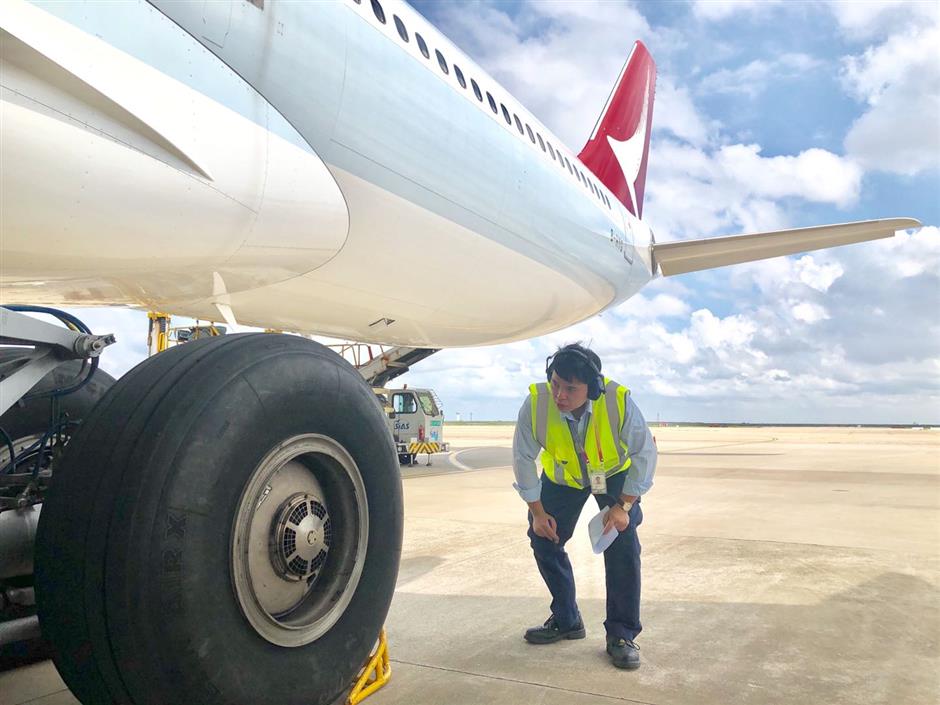 Zhang Jianhai checks the tyre for an aircraft.