Fancy yourself a sleuth? Whodunit unravels in the role-playing realm

The role-playing murder mystery game has become a popular way for young people to socialize and make new friends.

University sophomore Mao Qing, an introverted engineering student, fancies himself something of a sleuth.

On weekends, he gets together with friends to participate in role-playing murder mystery games.

"I like the feeling of using my wits," he explained.

This popular genre of entertainment involves six to eight participants, each with his own scripts, to look for clues and try to identify the murderer in a game that can last four to six hours.

Live action role-playing games, called jubensha in Chinese, evolved from murder mystery parties that originated in Western countries, though they can involve all genre of fictional settings. They have become something of a craze among young people, feeding an industry of more than 9 million players that is valued at about 15 billion yuan (US$2.4 billion).

The games' success may be explained, in part, as an escape hatch from the stresses of daily life and as a rewarding experience of personal camaraderie that can't be duplicated in online games.

For Liu Yuxi, 21, live role playing is a cheap way to kill time.

"It costs only about 100 yuan to play for a whole afternoon to play with friends," he said, with a shy smile. "When you immerse yourself in the game, all your worries are forgotten and even your soul can relax. Wearing a costume, sitting in a murder scene and playing with real people around you is so much different from handheld mobile games."

Pan Liduo, a sophomore at Shanghai International Studies University, said the LARP games are so popular because they enable conversation as participants perform the various tasks of sleuthing. She said the games have helped her overcome what she calls her "social phobia."

"The game gives you an excuse to talk to others, and your conversations will never be awkward in a fictional context," she explained.

The origin of live-action role paying is hard to pinpoint. The earliest recorded group was called Dagorhir, founded in the US and focused on fantasy battles.

The concept of the games came to China in 2013 in a translation of a UK game called "Death Wears White." In 2016, the Mango TV variety show "Who's the Murderer?" in China attracted a lot of attention.

"It's not just the players, but also the 'shop owners' who are very young," said Ge Qing, who operates six WeChat groups for role-playing shopkeepers. She said the oldest was born in 1996.

In fact, the entire live-action role playing industry, from script writers to distributors, is young. 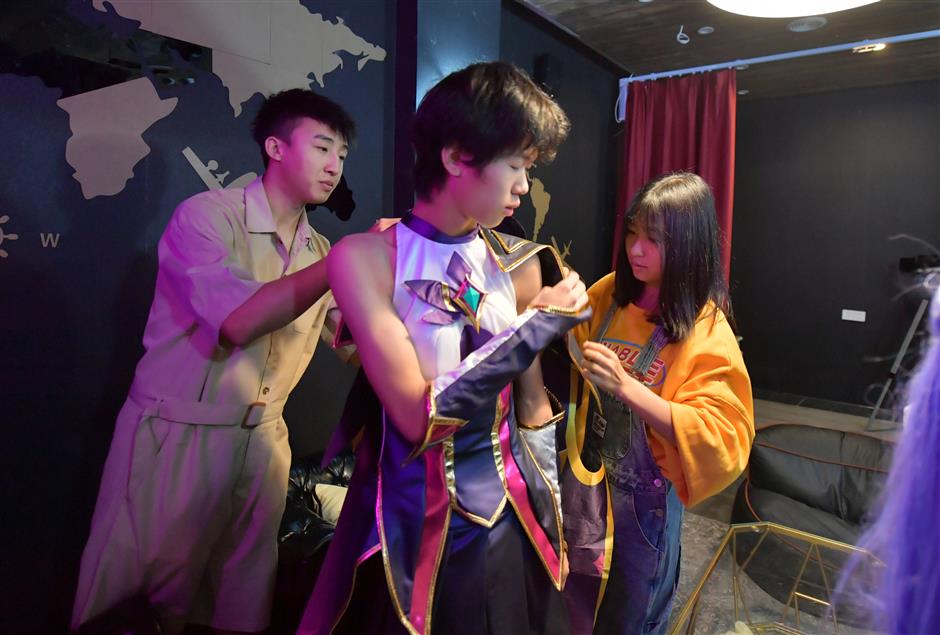 A player dons a costume during a role-playing murder mystery game. Players are each given a character with a complex backstory and thrown into an immersive environment to look for clues and interact with others to solve a crime.

A 26-year-old script writer who goes by the name Ake was originally a novel writer. She seized on the new trend by starting to write scripts in 2019.

The content in the industry is mainly produced by such script writers and distributed by publishers. Copyright purchases come in two forms: buyouts and sharing. In a buyout, fees are paid up front; in sharing, the writers are given a cut of script sales.

Ake said most of the script writers paid prefer profit-sharing arrangements, with one script fetching about 2,000-5,000 yuan. For exceptional scripts, payouts may be in the tens of thousands of yuan.

"The industry is young and filled with new writers who do not fully understand the rules and regulations," Ake said.

She has created a workshop to help new writers over the hurdles. The 30-day course costs 4,980 yuan.

Meituan data reveal there were more than 30,000 live role-playing shops in China by the end of 2020, an increase of 7 percent from a year earlier.

Ge, who owns a role-playing shop in Nantong, said success depends on ingratiating oneself with game publishers."

"The key to attracting customers is to buy the 'city-limited scripts,'" Ge added. "In script fairs, the 'city limited scripts' are often the first to be snapped up."

The lack of good DMs, or game masters, is also a problem for many business owners.

"Even with the same script, different DMs give different feelings," said a senior game master who goes by the name Jofo. "A good DM can sublimate the emotions and carry the story through adaptions."

Jofo, who was born in 2001, works at 314 LARP store in Shenzhen. She has more than two years of work experience, with a monthly income as high as 20,000 yuan. Despite her youth, she's considered "old" in the industry.

"There is a tradition in the industry, that, the DM will become the game shop owner, and the owner will move up to become a publisher," she said. "But almost all the jobholders involved are young."

The shop where Jofo works regularly invites acting teachers to give training in voice, acting and choreography to game masters so they can enhance the depth of games. But that is not always the case.

"There is no training in my store," said Huangfu Chenying, a freshman at Shanghai University of International Business and Economics, also works part-time as manager at the No.1 Player game shop in Songjiang University Town.

According to her, customers who use the shop aren't interested in the acting skills of game masters, even though competition in the industry is fierce in the university town.

The industry is growing so fast. With so many people flooding in, problems are inevitable. But as someone who really likes live role playing, I still hope the industry will become more standardized and the quality of scripts more vetted.

Good publicity is crucial in retaining customers and expanding.

Ge said she did a lot of field research before opening her shop. She found that despite the plethora of offline outlets, not all of them were making money.

"Sometimes there are two shops in the same building," she said. "One has no customers and the other is full. So when people ask me how I manage, I tell them that the trick is to use media to attract players."

Currently, the industry appears to be a frenzy of scriptwriters, publishers, distributors, game outlets and customers. Does it need to be more orderly?

Ge said script distributors enjoy a high status in the industry, with an increasing number of speculators getting involved. The result: distributors outnumber game outlet owners, and they often pay scant heed to the quality of scripts, content to copy others.

Ge said really good scripts need time to "grind" out, and the current impatience of the industry is inhibiting the emergence of good works.

According to the China University Media Union, a scarcity of good scripts, rampant plagiarism and the proliferation of homogenized scripts are problems. More than 61 percent of respondents in its survey said the industry needs market supervision to eliminate pirated works and hindrances to regular investors gaining a foothold.

Shen Yifeng, a sophomore who likes to participate in fantasy live role-playing games, said script content is becoming increasingly homogeneous. The main characters, he said, are often either demons or fairies, and however the plots develop, players go to the "Saint Stones" in almost every script."

In addition to the quality of scripts, the availability of pirated copies on the market is also a concern. According to Ge, many pirated scripts are even better than the original ones in terms of printing quality, so store owners prefer these cheap, but good-quality scripts.

What's more, those who buy pirated copies often take advantage of the low costs by engaging in price wars, making it difficult for shops that buy genuine versions to survive.

Shanghai lawyer Spring Liu, a partner in the Duan & Duan Law Firm, told Shanghai Daily that live-action role playing games are a relatively new commercial trend, so copyright holders don't yet know how to protect their rights. Law enforcement authorities have not kept up with the trend, he added.

Liu calls it a "transition period" that should give way to more enforcement and litigation eventually.

Concerns have also been raised about the rising popularity of such games among minors. Some of the games involve bloody violence and paranormal events, and even use horror as a selling point. That's viewed as a negative influence.

According to lawyer Liu, "Regular publication and printing should have the edition number, and if there is no such number, publishing regulations may be violated. However, that does not affect copyright owners' rights. Once a work appears, it is protected by copyright law."

Ake said she favors warnings on certain games, like those with horror effects, that advise the games be played by minors only with adult supervision.

"The industry is growing so fast," said Ge, "With so many people flooding in, problems are inevitable. But as someone who really likes live role playing, I still hope the industry will become more standardized and the quality of scripts more vetted."

Ge has her own team of script writers. "There are fewer and fewer good works, and I really want scripts that I like and that players will like. That would be very rewarding."