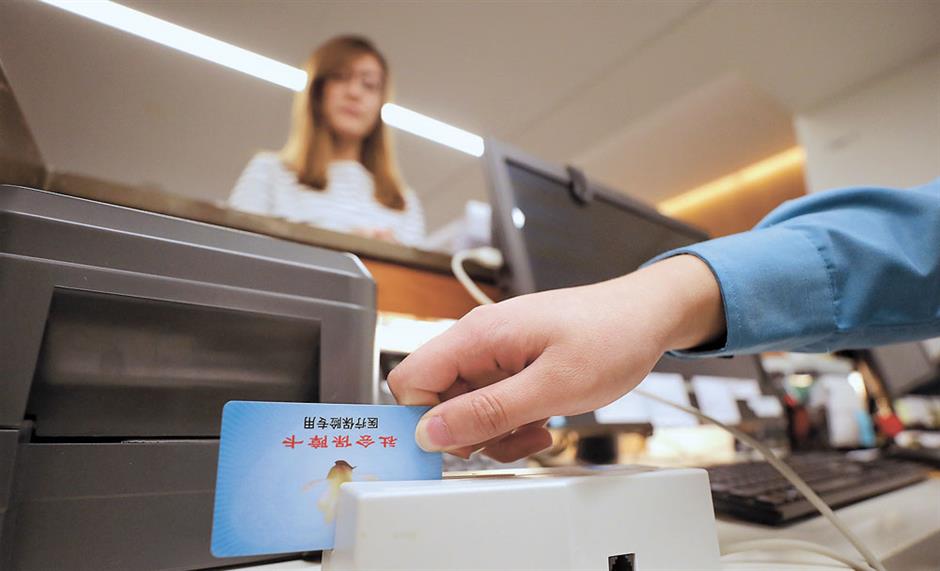 A 32-year-old female patient uses the city’s insurance to have part of her medical bill paid at Shanghai Jiahui International Hospital yesterday.

Local residents will be able to use the city’s medical insurance at a private international hospital for the first time.

Patients can now have their medical bill settled in Shanghai Jiahui International Hospital for the part covered by the city’s insurance, and pay the remainder in cash or with their commercial insurance.

The measure is in accordance with a new health policy issued in July to speed up local health reform and develop high-end health services, the Shanghai Commission of Health and Family Planning announced yesterday.

“This new policy can push forward a diversified and more international health system,” said Wu Jinglei, director of the commission.

She has visited the hospital since July and it was the first time that she used her medical insurance to have part of the medical bill covered.

The bill for her outpatient service, blood test, X-ray and medication totaled 1,250 yuan (US$180.64), including 424 yuan covered by the medical insurance.

“I prefer a private hospital, which has fewer people, better environment and better service,” said Li.

“The coverage of medical insurance means more people will go to private hospitals, instead of crowded public hospitals.” Shanghai Jiahui International Hospital, which has 500 beds and is run in collaboration with American-based Massachusetts General Hospital, is the first international hospital to implement the new policy.

About 5 percent of patients at Jiahui are local residents using medical insurance, the hospital said.

Private hospitals can set pricing themselves but the policy encourages high-end private health facilities to adopt a similar price standard to public hospitals.

According to the hospital, it is charging almost the same as VIP services in city-level public hospitals, which is about three times the basic health service cost.