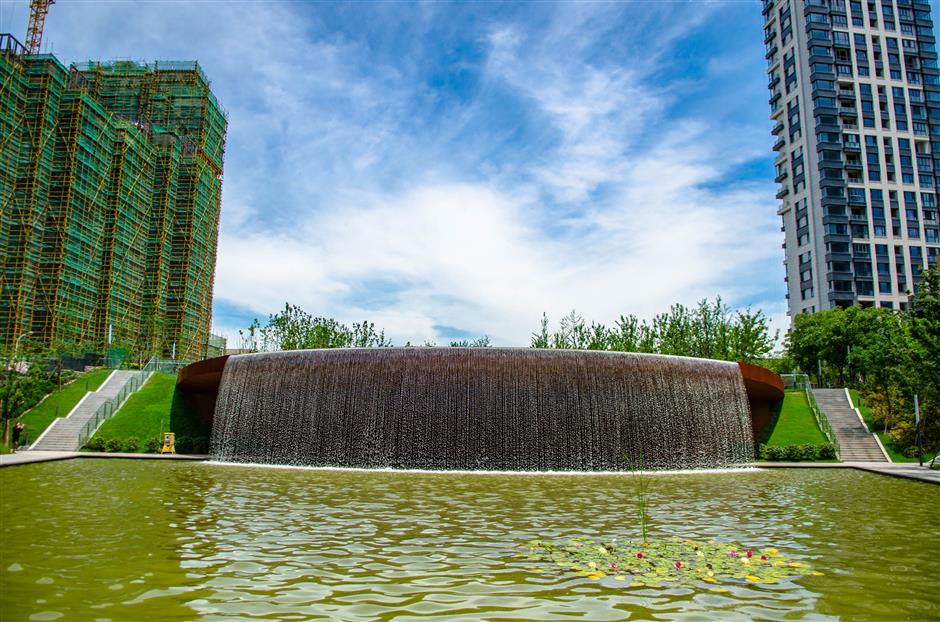 Two riverside parks and a new waterfront section along the Yangtze River have been created from a former container dock in Baoshan District.

Once a bustling center for maritime trade, Shanghai Long Beach, or Changtan area, is being developed for housing and leisure like many other container ports around the world.

The riverside, which stretches for 1.8 kilometers along the Yangtze, will be on par with London’s Canary Wharf and Germany’s Hamburger Hafen, the Shanghai International Port Group (SIPG) said on Thursday.

The 770,000-square-meter project, twice the size of Canary Wharf, will have 4,200 apartments, parks, shopping malls, restaurants and coffee shops, hotels and kindergartens, the group said.

A hillside park and a waterfall park opened to the public on Thursday, offering a glimpse of the ongoing redevelopment. Many industrial relics such as a last-remaining grab bucket as well as the rusty steel plates have been retained to decorate the 36,000-square-meter hillside park.

“Our vision for the park started with the premise that great communities have great parks. Those great parks must be diverse to meet all the needs of inhabitants,” said Tom Balsley, chief landscape designer with the company behind the parks, SWA/Balsley. 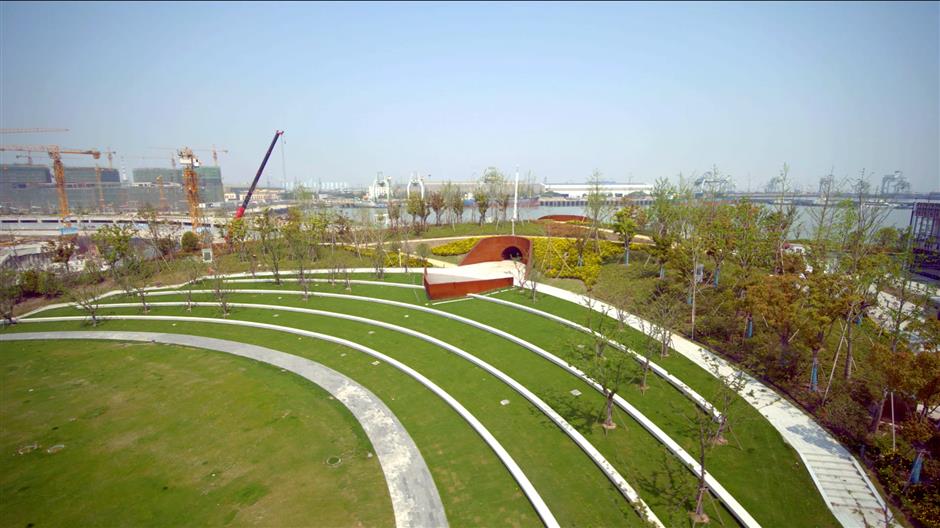 Many industrial relics such as a last-remaining grab bucket as well as rusty steel plates have been retained to decorate the hillside park. 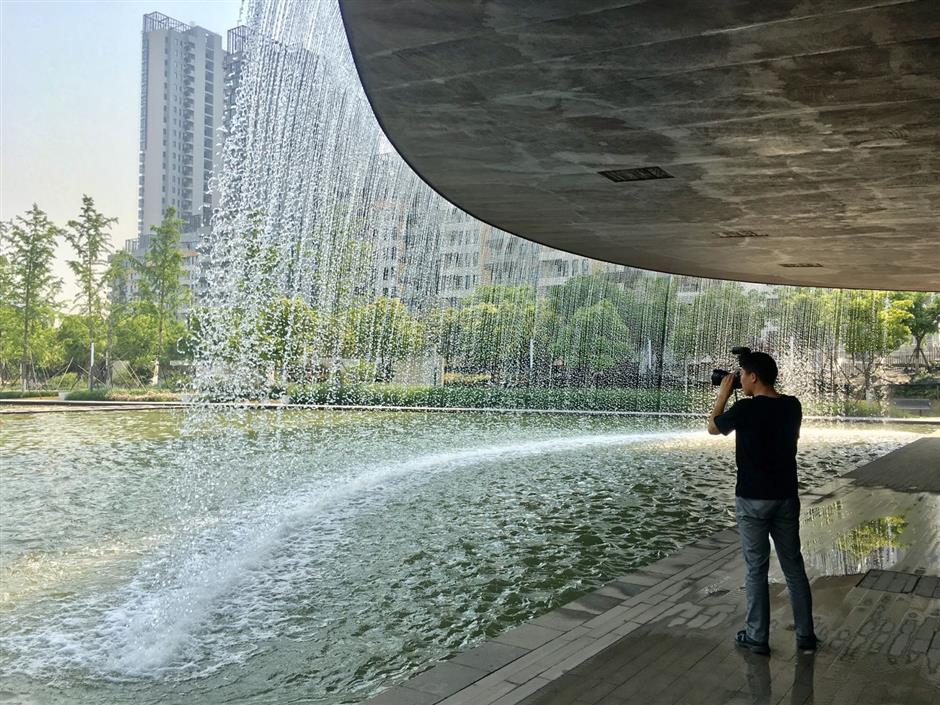 A visitor takes a photograph of the waterfall park on Thursday.

Architectural designs have highlighted the port’s history and riverside location. The buildings have been designed with the features of luxury yachts since the waterfront region will develop a yacht club for about 270 boats in the future. A commercial complex has been designed in the shape of two Yangtze River dolphins.

Redevelopment of the area, which will be completed by the end of 2021, will also feature a 180-meter sightseeing tower.

A ball-shaped IMAX cinema will become the third-largest in the world after the LG IMAX Theatre in Sydney and an IMAX cinema in Singapore, the district government said. Its screen will be 22.4 meters wide and 12 meters tall.

The water of the Yangtze River will be poured into the complex to make the whole project like two dolphins playing with a pearl in the river, according to the designer of the cinema.

An underground structure has been finished for a Crystal Concert Hall, another cultural landmark for the north part of the city. The structure is scheduled to be completed by early next year.

The site formerly known as the 14th section of the SIPG port was once dubbed the “pearl of Baoshan” due to its bustling container transport and storage functions. The port handled 1,927 transport trucks every day at its peak in 2009.

The district government and SIPG officially launched the redevelopment campaign in 2012. With a total investment of 15 billion yuan (US$2.16 billion), the project is expected to create about 14,000 jobs, according to the Baoshan government. 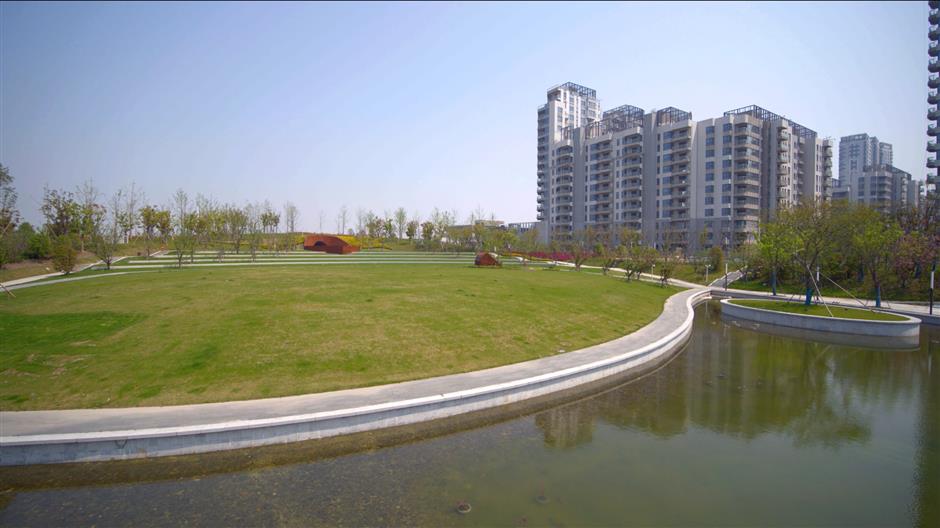 Many industrial relics such as a last-remaining grab bucket as well as the rusty steel plates have been retained to decorate the hillside park. 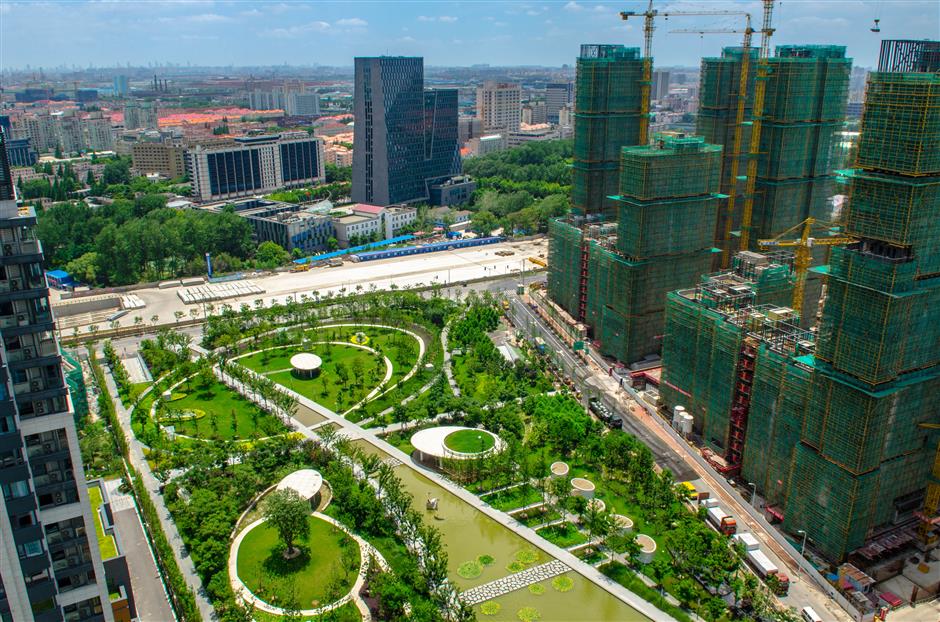 An aerial view of the ongoing development at Shanghai Long Beach, once a bustling cargo port for maritime trade