Going local with festival of fashion and life 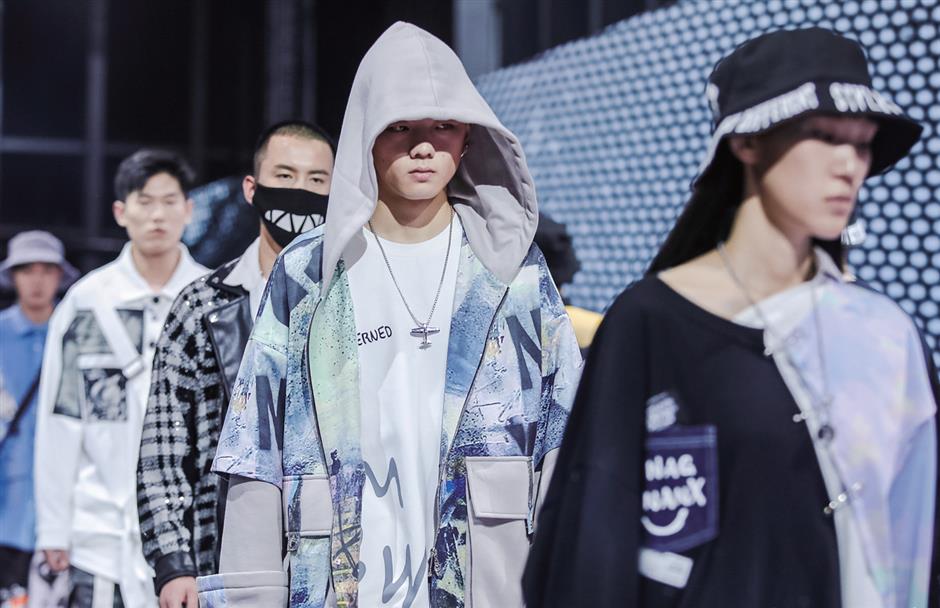 Models sport the latest designs from Chinese fashion brands at the opening ceremony of the 2021 Shanghai Fashion Life Festival in Hongkou.

A fashion life festival has been launched in Hongkou District to promote domestic brands and products amid the city's ongoing shopping carnival.

The 2021 Shanghai Fashion Life Festival began at Raffles City The Bund complex on May 14 on the North Bund as part of the 2nd Shanghai Double Five Shopping Festival. A traditional dance of China's Han Dynasty (206 BC-AD 220) marked the beginning of the shopping frenzy.

More than 200 domestic fashion brands will release new products and host events such as design competitions during the festival through end-June.

The festival, jointly hosted by the city's commerce commission and the Hongkou government, was initiated in 2020 to boost the consumption of new Chinese brands – especially among the young.

Hongkou aims to drive the new products and fashion economy across its shopping landmarks.

The government will offer subsidies for new products and stores in Hongkou to create a commercial and trading center on the north bank of the Suzhou Creek, said Zheng Hong, deputy director of Hongkou.

Total subsidies will reach over 100 million yuan (US$15.5 million) over three years.

During the opening ceremony, popular e-commerce app Dewu, one of the organizers of the festival, along with over a dozen new domestic brands such as PCMY, GUUKA and LNG hosted a fashion show, featuring their new products.

The founders of the brands said they were committed to making quality the top priority for all domestic fashion brands.

A popular list of domestic brands has also been released, covering clothes, shoes, souvenirs, cosmetics and watches as well as bags and suitcases.

Total sales of Chinese brands on Dewu increased 10 times in 2020, according to Yang Bing, founder and CEO of Dewu. Many time-honored brands have also taken the chance to release new products and renew their brand images.

He urged domestic brands not to merely copy traditional culture, but to also blend new styles and innovation.

An online promotion event for domestically made products has been launched for the shopping festival.

Coupons and discounts are being offered on e-commerce platforms such as Dewu.

OLOE, a newly founded domestic cartoon images brand, launched its new doll on Dewu on May 10, which sold out immediately. Jewelry brand CIGA released a new watch designed jointly with the Palace Museum in January, which also proved to be popular among young customers.

To further boost the popularity of domestic brands, a design competition has been launched for the festival.

Designers have been invited to develop innovative products based on exhibits at the Shanghai Museum, the Memorial Site of the Fourth National Congress of the Communist Party of China and China's aerospace missions.

Leading brands such as LNG and CIGA will pick up the best designs from the contest and develop them into products.

Hongkou will host over 10 promotional events, mainly on the North Bund, during the festival, which is also part of the city's annual Global Products Debut Season.

The season kicked off on April 30 as part of the Double Five Shopping Festival and will run for six weeks. More than 2,800 products from over 550 brands will make their debut during the campaign, with over 100 of the brands from abroad, further stimulating market vitality, the city's Commission of Commerce said.

Hongkou will host a number of "debut" events with different themes such as "fashion," "store" and "nightlife." The district aims to develop a gathering place for stylish brands, products and customers.

A new pop-up store to mark the 50th anniversary of the launch of Japanese anime Doraemon has been opened at the Sinar Mas Plaza. The 320-meter-high plaza, also known as the White Magnolia Plaza, is currently the tallest structure in Puxi.

A wine summit and exhibition as well as a nightlife festival in the Jiangwan area will also be held during the festival.

As a highlight, the Raffles City The Bund will officially open as the third Raffles City mall in Shanghai. Over 30 percent of the stores in the complex will be the first store in Shanghai or the Chinese mainland.

Hongkou has been further optimizing its business environment and improving services for the new companies and businesses, especially on the North Bund, which has been listed as the new engine for Shanghai's future development.

For instance, the application process has been shortened from more than 20 days to five for certain issues for tenants based at Raffles City on the North Bund, according to an official with the landmark complex, which features office buildings and malls.

"The streamlined services have effectively showcased the improved business environment of the North Bund and attracted many global companies and businesses," said an executive with Raffles City The Bund.

The riverside region, covering about 4 square kilometers, will meet the same high standards as the Lingang Special Area and the Pudong New Area in the east of Shanghai.

These include dozens of top-level office buildings, which will house about 100 headquarters of multinational firms, international organizations and functional institutes. The district has organized an expert panel and a chief architect office to guide the development and construction of the site. A number of the world's top architects and urban planners have been appointed, while seven leading global architecture design institutes have been invited to take part.

Over 20 skyscrapers, including a 480-meter landmark, have begun soliciting design plans from across the world.

The annual shopping festival that runs through June aims to expand and improve the city's consumption and accelerate the development of Shanghai as an international consumption center.

City-wide, Shanghai is set to launch around 1,900 promotional activities during the shopping festival.

Compared to last year's festival, this year's event is larger, better in supply quality and in scope and more practical in benefiting consumers, according to the Shanghai Commission of Commerce.