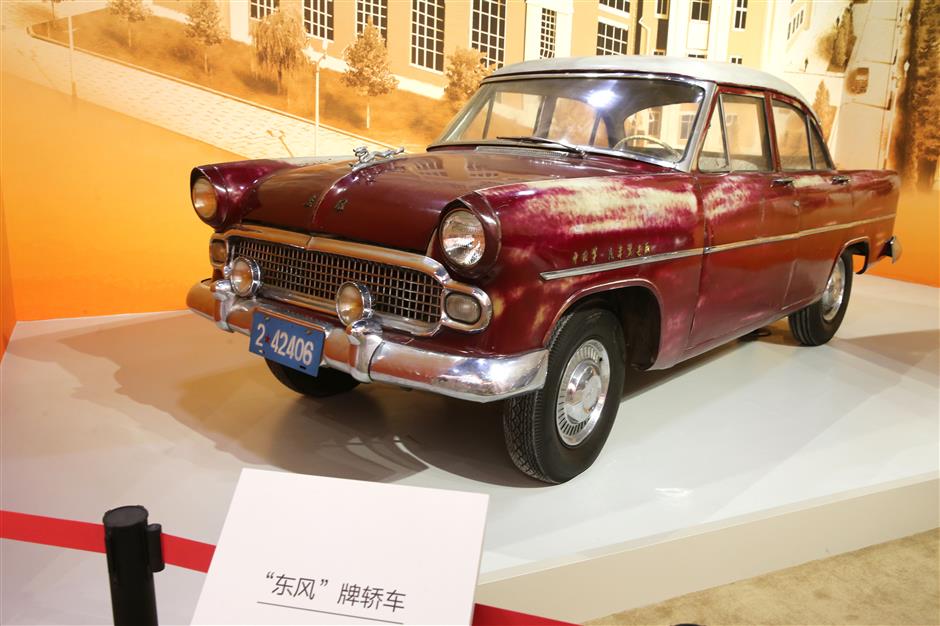 The first domestic car Dongfeng produced in 1958 is displayed at a grand exhibition of achievements in commemoration of the 70th anniversary of the founding of the People's Republic of China at the Beijing Exhibition Center in Beijing.

Displayed in the showroom, the first domestic car Dongfeng produced in 1958 has attracted a crowd of viewers at an ongoing exhibition at Beijing Exhibition Center.

Taking a close look at the vehicle, one will find the number on its license plate is "42406," which represents how many cars China owned at that time.

By the end of 2018, the number of cars in China reached 240 million, witnessing a big leap in both quantity and quality.

At the exhibition to celebrate the 70th anniversary of the founding of the People's Republic of China (PRC), various exhibits comprehensively reflect the practices, achievements and experiences of the past 70 years.

"When I was young, I used to travel by bicycle, but now my family owns three cars and I got my driver's license at 60," recalled Sun Shien, a 75-year-old visitor, who stopped at an old-fashioned bicycle in the showroom.

Sun was also thrilled to see a huge relief depicting the opening of the Chengdu-Chongqing Railway, the first railway built after the PRC's founding.

"As a member of the railway construction team, I am so proud to witness so much advanced equipment and technology in the construction of the new high-speed railway, which I believe represents the rapid development of our country," said Sun.

Jin Gendong, a visitor who came to Beijing via high-speed train from Nanchang, capital of east China's Jiangxi Province, never imagined that the travel time needed for the journey would fall from two days to less than seven hours.

"China speed" is now less about the sheer velocity of building roads, bridges and airports, or producing greater numbers of motorcycles and cars. Instead, it is more about how these vehicles become greener, more intelligent and more efficient.

"Behind 'China speed' are great improvements in the country's economy and people's living standards. What an amazing transformation it has been!" Fang Qianqi, a student visitor said.