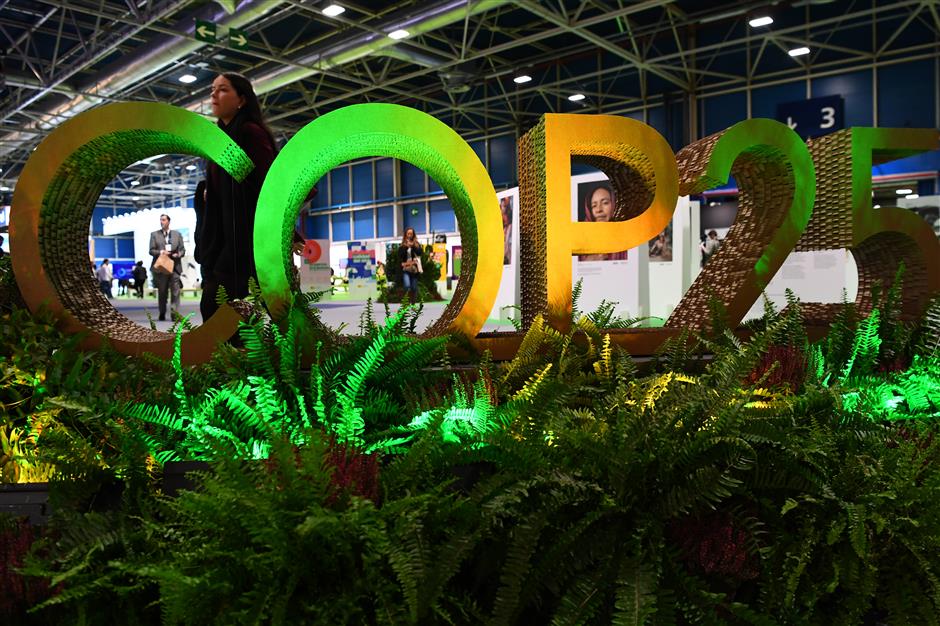 A visitors walks by the logo of the UN Climate Change Conference COP25 in Madrid on December 2, 2019.

Solving issues relevant to the implementation of the 2015 Paris Agreement and seeking better ways to fund the fight against climate change are among the major issues for the Chinese delegation at the UN Climate Change Conference (COP25), an official said on Tuesday.

"The first thing we want to promote is the completion of the negotiations on the remaining issues of the implementation rules of the Paris Agreement," said Lu Xinming, deputy director general for climate change at China's Ministry of Ecology and Environment, in an interview with Xinhua.

Lu said on the sidelines of the COP25 in Madrid that resolving those outstanding issues would form "the basis for the global implementation of the Paris Agreement," which seeks to drastically reduce greenhouse gas emissions and limit global warming.

One of the big problems of implementation is that the developing countries need financial aid to reach the emission cut targets. Meanwhile, these countries are caught in a balancing act between aiming to comply with the Paris Agreement and generating the economic growth needed to provide their citizens with an improved standard of living, said Lu.

Over 26,000 delegates from all over the world are discussing Article 6 of the Paris Agreement, which aims at promoting approaches that will assist governments to contribute to the fight against climate change through market mechanisms. This is one of the key goals of COP25.

"We hope to make positive progress on funding issues," added Lu, who hoped to see the developed countries show solidarity with the developing world.

"Developed countries can provide developing countries with more new and additional funds to help them actively respond to climate change," he said.

On Tuesday, the World Meteorological Organization (WMO) published a report saying that the past decade is likely to go down as the hottest on record. The Chinese official also spoke about the need to turn words into action to stop the planet from overheating.

"We hope to take stock of global climate change commitments and actions before 2020 and find practical solutions," Lu said, making it clear that the only way a solution would be reached was through nations working together.