Wuhan seafood market may not be only source of novel coronavirus: expert 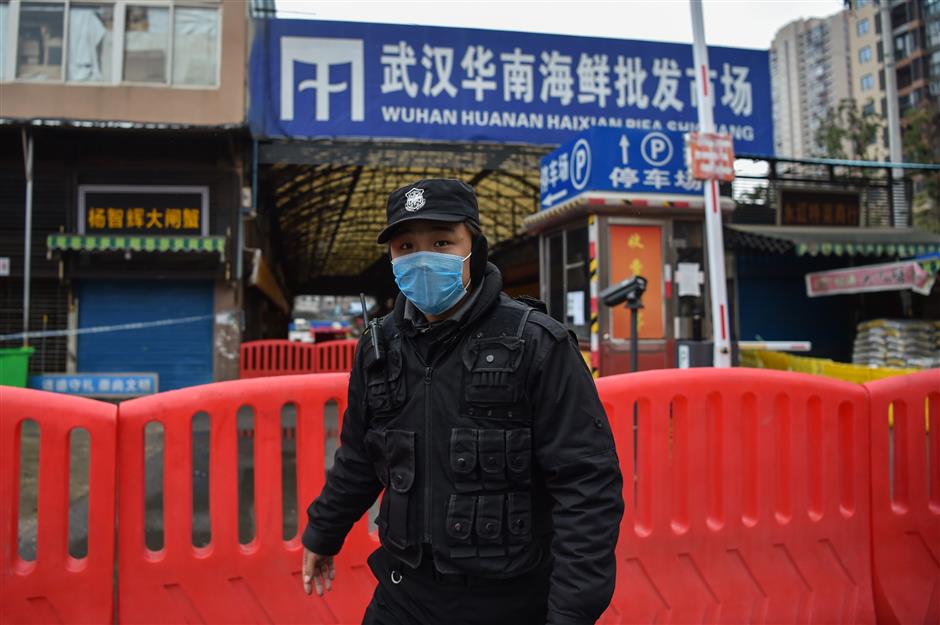 A security guard stands outside of Huanan Seafood Wholesale Market where the coronavirus was detected in Wuhan on January 24, 2020.

The seafood market in Wuhan, central China's Hubei Province, may not be the only source of the novel coronavirus (2019-nCoV) outbreak, according to a Chinese pulmonary disease specialist.

Huang Chaolin, vice director of Wuhan Jinyintan Hospital, revealed in a recent interview with business magazine Caixin that there might be multiple places where the virus was first transmitted to humans.

Wuhan Jinyintan Hospital is one of the city's designated hospitals to admit patients infected with the new virus. Huang and his team have recently published a paper in the Lancet, the world's leading general medical journal, about some early findings on the clinical data of the first 41 novel coronavirus cases.

The first patient, who was admitted to Huang's hospital on December 1, 2019, had no direct exposure to Wuhan's Huanan Seafood Wholesale Market, which was previously considered as the source of the epidemic, and his family had no fever or respiratory symptoms, according to the paper.

Among the following three patients who were admitted on December 10, two had no exposure to the seafood market. In total, only 27 of the 41 cases had exposure to the marketplace, said the paper.

"Judging from the whole situation, the seafood market may not be the only source. (The origin of the novel coronavirus) might be multi-source," Huang said.

But no clues about other sources have been discovered.

The Huanan seafood market is located in the downtown area of the city's Jianghan District, less than one kilometer away from Hankou railway station. Besides seafood, poultry and game meat were also sold in the market before it was shut down on January 1.

Experts of the Chinese Center for Disease Control and Prevention have previously isolated the novel coronavirus successfully in the environmental samples collected from the market. Thirty-three of 585 samples from the market were found to contain the nucleic acid of the virus.

As of the end of Tuesday, the novel coronavirus had claimed 132 lives and infected 5,974 people nationwide in China.