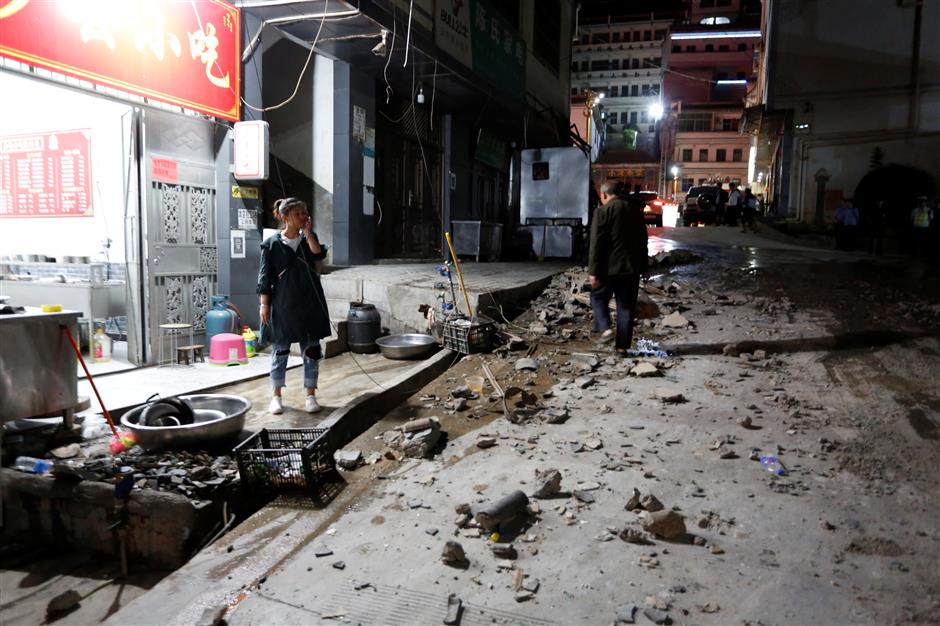 Debris are scattered on a street in Qiaojia County in southwest China's Yunnan Province following a 5-magnitude earthquake on May 19, 2020.

The death toll in a 5-magnitude earthquake that struck Qiaojia County in southwest China's Yunnan Province late Monday has risen to four, with 24 others injured, local authorities said on Tuesday.

The Yunnan provincial disaster reduction committee office and the provincial emergency response department have launched a level-four response for the disaster relief and sent a working group to the disaster area to assist and guide the earthquake relief work.

A mining rescue team from Zhaotong City is on the way to the disaster area. Meanwhile, the Zhaotong fire department has dispatched 91 fire fighters aided with 19 fire engines and four sniffer dogs to join the rescue.

Xinhua reporters on Tuesday morning saw rescuers approaching Yakou Village, Xiaohe Township in the epicenter of Qiaojia. Excavators are removing debris of landslides along the road. Rescuers have brought with them disaster relief goods including mineral water, bread and porridge to the village.

The road traffic to Xiaohe and Xindian townships has remained unblocked. The earthquake damaged 10 telecom base stations. Workers have fixed five of them. The county government of Qiaojia has allocated disaster relief goods including 100 tents, 500 quilts, 25 tonnes of rice and 400 barrels of edible oil to Xiaohe Township.