Future of wingsuit flying is strong, despite recent tragedy 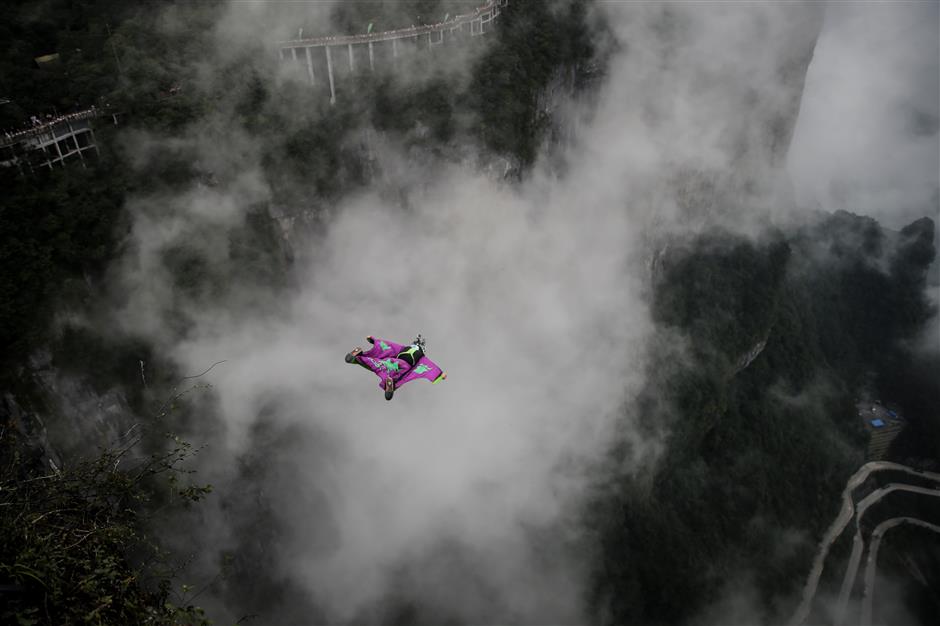 A flyer slides through Tianmen Mountain in Zhajiangjie, Hunan Province, in September 2017.

It is man's "bird-like" moment but a daredevil's game to play, and perhaps the craziest of all extreme sports. It is the wingsuit flying.

People in China have known little about this extreme sport until reports of a young lady's tragic last jump recently in central China's Zhangjiajie Mountains, a much sought-after destination for wingsuit fliers worldwide.

As people review the footage of that jump and mourn over her death, they are learning to understand this sport: its unique charm, rules, and stories behind.

"Most people learned of the news, not the sport itself," a professional wingsuit pilot told Xinhua after the accident.

The body of the female wingsuit pilot who had gone missing on May 12 was found, sources from the Tianmen Mountain National Forest Park confirmed on the evening of May 18, nearly a week after she plunged off from a helicopter during a film shoot in the Zhangjiajie mountains.

Her body was found at an altitude of 900 meters in an unfrequented dense forest in the scenic area, a relative drop of about 1,600 meters from where she flew off from the helicopter.

She did not have any mobile phones, GPS, or other communication devices with her during the flight.

Film footage unveiled later indicated that the female pilot deviated from her planned route and lost contact shortly after 11:19am on May 12, when she and a wingsuit cameraman plunged off from a helicopter flying at an altitude of 2,500 meters.

Rescuers believed that a parachute failure mainly caused the accident.

Previous search and rescue efforts had been hampered by complicated terrain, along with low visibility caused by recent persistent rainfall.

Born in 1996, the young woman would have undergone systematic professional training abroad and have completed hundreds of wingsuit flights and skydives.

For spectators, it's already a thrill just to watch a live wingsuit flying performance, let alone jumping in person with a wingsuit on and controlling the freefall.

Wingsuit flying is an extreme sport that involves participants gliding through the air wearing a specially constructed suit with fabric under the arms and legs to slow the rate of descent. There is high-altitude flying — plunging off from a plane at the height of about 4,200 meters and low-altitude flying — plunging off from cliffs, bridges, among others. During a flight, a wingsuit pilot controls his or her movements by adjusting the body posture to accelerate, decelerate, and turn.

In a high-altitude flight, a flyer carries two parachute systems, the main and the auxiliary. To prepare for a landing, the parachute is opened at the height of 1,000 meters. In a low-altitude flight, however, a flyer can sail from any point that provides sufficient altitude but with only one parachute, which can be opened as low as 150 meters above the ground. Similar to skydiving, the latter is much riskier with complex scenarios such as route deviation and the sudden encounter of obstacles.

In 2011, US professional flyer Jeb Corliss dropped out of a helicopter at 2,000 meters and winged his way through the giant Tianmen Hole in the Zhangjiajie mountains, becoming the first "Batman" to cross that cave. The record jump drew intense media coverage in China and brought this sport to the Chinese soil.

While this extreme sport can turn some into "flying squirrels," it is scaring away many more people who believe that there are too many narrow misses, and each could be fatal.

In August 2013, 41-year-old Mark Sutton, who parachuted dressed as James Bond during the 2012 London Olympics opening ceremony suffered a fatal fall in Switzerland. Just two months later, another pilot, three-time Hungarian national champion Victor Kovac died from a cliff crash during a trial jump in Tianmen Mountain. In 2017, world-renowned wingsuit athlete, Canadian Graham Dickinson, had everything meticulously planned for a leap off a mountain, unaware that the base jump seconds later was going to be his last.

Nobody can fly as easily as a real bird. A flight as a bionic one can be highly demanding: stamina, skills, and long-term professional training.

To fly professionally, one has to undergo systematic high-altitude skydiving training, said Zhang Shupeng, first Chinese wingsuiter to compete in the World Wingsuit Championships and a silver medallist for the target competition event.

To avoid turning this sport into suicide, a wingsuiter can never be more meticulous: he or she should be fully-equipped with well-functioning devices and keenly aware of the weather and the air currents. There should be triple checks -- check upon receiving the devices, check before boarding, and pre-jumping.

As extreme sports are fast gaining popularity among the Y- and Z-generations of China, Zhang sees a promising future of sports in the increasing number of young people who are willing to challenge themselves and push up their limits, meanwhile appealing for "full preparation, greater awareness of danger and abundant professional training."

"Bear in mind that profound reverence for nature and rules always comes first," he said.