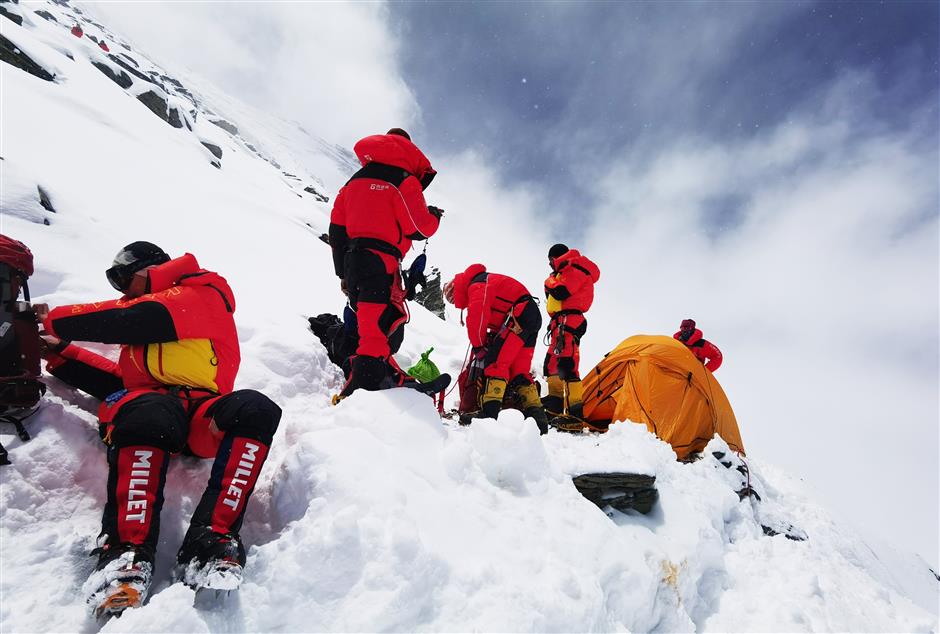 Members of the Chinese mountaineering team retreat to the camp at an altitude of 6,500 meters of Mt. Qomolangma on May 21, 2020.

A Chinese mountaineering team has further delayed its plan to reach the peak of Mt. Qomolangma on May 22 due to bad weather conditions.

Wang Yongfeng, vice director of the mountaineering administrative center of the General Administration of Sport, said the climbers have decided to retreat to the camp at an altitude of 6,500 meters.

The mission is to conduct surveys at the summit to accurately measure the height of Mount Qomolangma.

According to Wang, the rope fixing team left the camp at an elevation of 7,790 meters at 2am on Thursday and was blocked by deep snow and falling rocks when they climbed to an altitude of about 8,000 meters. The team members were physically exhausted and decided to withdraw to the camp.

At 8am, they set out again but were forced to retreat for the second time by continuous snowfall and risk of avalanche. The team said that the ropes laid on May 12 toward 8,600 meters above sea level were unable to be found due to the strong wind and snow on the mountain in recent days.

The weather window for the next attempt for the summit is still uncertain, Wang added.

Located at the China-Nepal border, Mount Qomolangma is the world's highest peak, with its north part located in Xigaze of southwest China's Tibet Autonomous Region.

Since the founding of the People's Republic of China in 1949, Chinese surveyors have conducted six rounds of scaled measurement and scientific research on Mount Qomolangma and released the height of the peak twice in 1975 and 2005, which was 8,848.13 meters and 8,844.43 meters respectively.

In 1975, when the Chinese mountaineering team scaled Mount Qomolangma, no professional surveyors reached the top. But the mountaineers took a survey marker to the summit, which helped surveyors from nine observation stations near the mountain to calculate that it stood 8,848.13 meters tall.