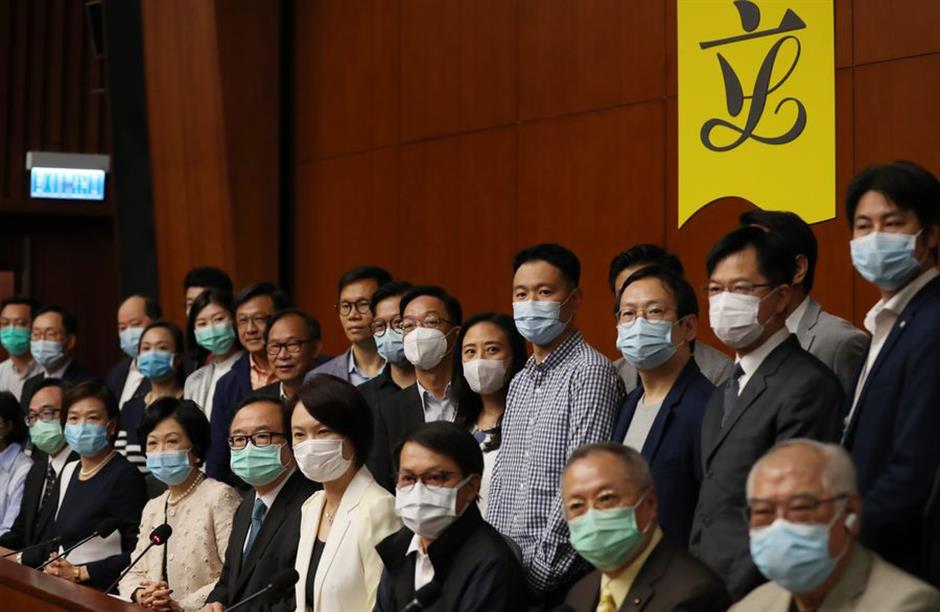 Members of the Legislative Council of the Hong Kong Special Administrative Region express support for establishing and improving at the state-level the legal system and enforcement mechanisms for the HKSAR to safeguard national security at a press conference in Hong Kong, South China, on May 22, 2022.

The president and 41 members of the Legislative Council (LegCo) of the Hong Kong Special Administrative Region on Friday expressed support for establishing and improving at the state-level the legal system and enforcement mechanisms for the HKSAR to safeguard national security.

A draft decision on establishing and improving the legal system and enforcement mechanisms for the HKSAR to safeguard national security was submitted to the third session of the 13th National People's Congress for deliberation on Friday.

LegCo President Andrew Leung said at a media briefing at the LegCo Complex that national security is the bedrock underpinning the well-being of people of the People's Republic of China, and safeguarding stability of the whole country and Hong Kong as its special administrative region will facilitate the economic development and improvement of people's livelihood.

In light of the latest development and actual situation, the NPC exercises its powers enshrined in the Constitution of PRC to establish the relevant legal system, Leung said. "This is in line with the interest of the country and Hong Kong society as a whole. As the president of LegCo, I respect, understand and support this initiative."

The 41 LegCo members said in a joint statement that nearly 23 years since its return to the motherland, Hong Kong has not yet fulfilled its legal responsibility of enacting laws on its own to safeguard national security in accordance with Article 23 of the Basic Law, leading to a great harm to the Hong Kong society and even endangering the safety and well-being of the 1.4 billion people in the whole country.

The increasingly rampant "Hong Kong independence" forces have colluded with separatist groups in Taiwan, Tibet and Xinjiang as well as external forces against China, attempted to "occupy" and damage Hong Kong's legislature, stormed the central government's offices in Hong Kong and even clamored for "gaining independence through armed revolution" and "setting up an interim government" under the so-called "public square constitution, they noted.

These evil-doings and the series of violent incidents since June 2019 that intended to carry out a "color revolution" in Hong Kong by terrorist means are all examples of serious threats to national security in Hong Kong, they added.

As China's highest organ of state power, the NPC has the constitutional power and absolute responsibility to safeguard the security of the nation and its people, and this responsibility must be fulfilled in every corner of the country's territory, including Hong Kong, the LegCo members pointed out.

They expressed understanding of and support for the national legislature's efforts to safeguard national security, the people's well-being, Hong Kong's prosperity and stability, Hong Kong residents' legitimate rights and freedoms, and the smooth and sustained implementation of "one country, two systems."