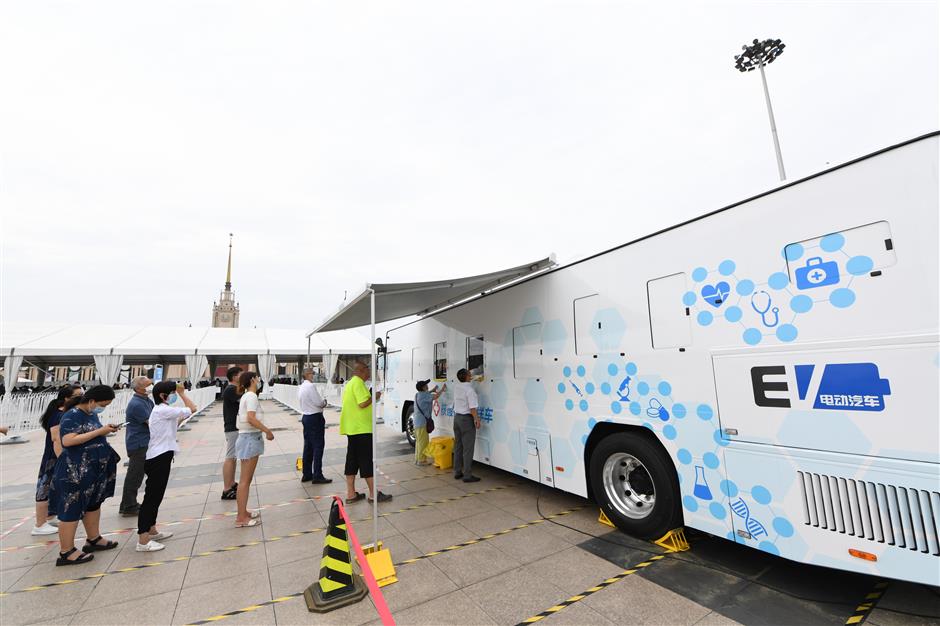 Beijing residents line up to receive nucleic acid testing at a sampling vehicle in Xicheng District on Sunday. The capital set up two air-conditioned Foton vehicles in Xicheng and Chaoyang districts to make testing more convenient and improve working conditions for medical staff. One such bus has four sampling windows, each of which can sample about a hundred people per hour.

China imposed a strict lockdown on nearly half a million people in a province surrounding Beijing to contain a fresh coronavirus cluster on Sunday, as authorities warned the outbreak was still “severe and complicated.”

After China largely brought the virus under control, hundreds have been infected in Beijing and cases have emerged in neighboring Hebei Province in recent weeks.

Health officials said on Sunday that Anxin County — about 150 kilometers from Beijing — will be “fully enclosed and controlled,” the same strict measures imposed at the height of the pandemic in the city of Wuhan earlier this year.

Only one person from each family will be allowed to go out once a day to purchase necessities such as food and medicine, the county’s epidemic prevention task force said in a statement.

The move comes after another 14 cases of the virus were reported on Saturday in Beijing, taking the total to 311 since mid-June and spurring the testing of millions of residents.

The outbreak was first detected in Beijing’s sprawling Xinfadi wholesale food market, which supplies much of the city’s fresh produce, sparking concerns over the safety of the food supply chain.

Nearly a third of the cases so far have been linked to one beef and mutton section in the market, where workers are being made to quarantine for a month, city officials said on Sunday.

Businesses in Anxin County had supplied freshwater fish to the Xinfadi market.

Some 12 cases of the novel coronavirus were found in the county, including 11 linked to Xinfadi, Global Times reported.

The capital has mass-tested wholesale market workers, restaurant workers, residents of medium and high-risk neighborhoods and delivery couriers over the past two weeks.

Beijing has ramped up coronavirus testing efforts and has tested about a third of the Chinese capital’s population so far, a city official said on Sunday.

“This means we have already tested all the people that need to be tested. We are also rolling out large scale screening to key regions and key populations (of the city) and improve our capability of testing,” said Zhang, adding that Beijing was also receiving medical support from other provinces.

According to Zhang, the testing is being done in batches and includes workers from the market and residents in surrounding neighborhoods.

Zhang added that Beijing’s daily testing capacity has increased to 458,000 per day.

Beijing has lowered the prices for nucleic acid testing at public medical institutions.

Starting on June 25, the price for each test went down from 180 yuan (US$25) to a ceiling of 120 yuan at all of the city’s public medical institutions, Du Xin, deputy head of the Beijing Medical Insurance Bureau, said. These medical institutions are allowed to further lower their prices for testing, Du added.

Non-public medical institutions involved with public health insurance programs are required to lower the prices to the same level too for people who are covered by such programs.

Other non-public medical institutions are allowed to set their testing prices according to the market, but they must follow national and municipal regulations, Du said.

Beijing city official Xu Hejian told reporters on Sunday that “the epidemic situation in the capital is severe and complicated,” warning that the city needed to continue tracing the spread of the virus.

City officials have urged people not to leave Beijing, closed schools again and locked down dozens of residential compounds to stamp out the virus.