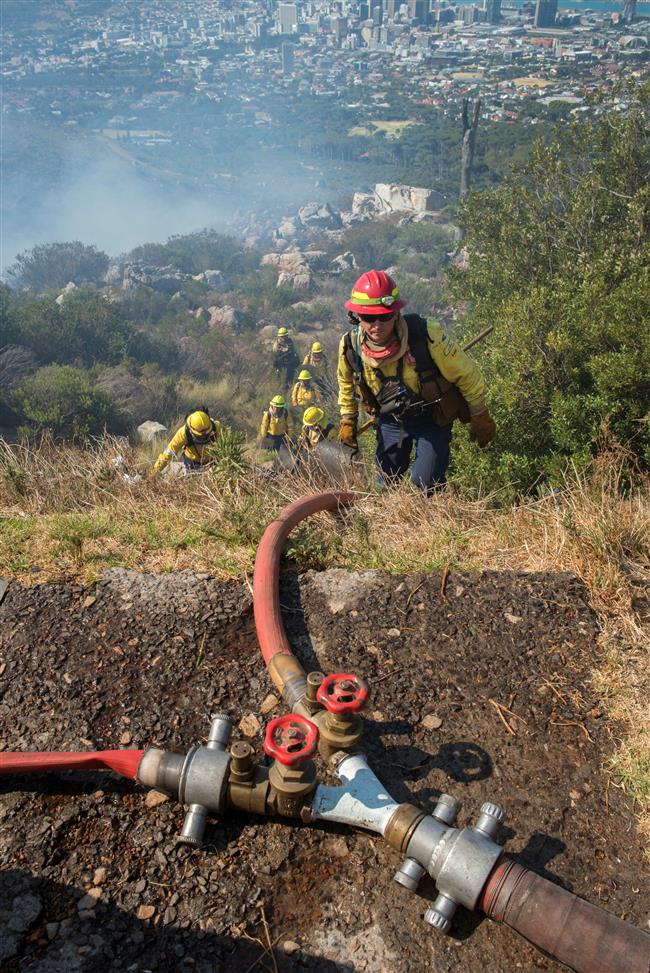 Firefighters walk up along a fire hose after fighting a fire on Table Mountain on January 28, 2018, in Cape Town. Firefighting organitations face an especially difficult next few months as the risks of fires is on the increase, as the summer season reaches it's hottest time, but the Western Cape is facing severe water shortages.

Officials in Cape Town Monday tried to allay international concerns about the water crisis in the South African city, saying tourists and investors are welcome despite fears that most taps could be turned off in April because of drought.

In a “two-way conversation,” some diplomats who met officials managing Cape Town’s crisis referred to water shortages in their own countries, including in Barcelona in Spain and the US state of California, said Tim Harris, CEO of Wesgro, an agency that promotes tourism and trade in Western Cape province.

“I think a lot of cities are going to go through challenges like this,” Harris said after the meeting.

Experts say key causes of Cape Town’s water shortages are climate change and huge population growth since the 1990s. Rival political factions are arguing over alleged failures to prepare for the crisis.

Western Cape province includes Cape Town, where municipal authorities say they will have to close most taps on what they call “Day Zero,” slated for April 12, if residents don’t save enough water.

Authorities hope for seasonal rains soon and are working to extract water from alternative sources, including aquifers and desalination.

A South African charity said Monday it was organizing a nationwide collection of bottled water for stockpiling in military bases in and around the city of 4 million people.

Two trucks were making an initial delivery to Fort Ikapa base in Cape Town Monday and water will be distributed to residents “at the appropriate time,” the Gift of the Givers charity said.

Helen Zille, the Western Cape premier, and disaster management officials were among those who met the diplomats, Harris said. The goal, he said, was to deal with the “unintended consequences” of the city’s blunt warnings to residents.

“When you start talking ‘Day Zero’ to an international audience, you get quite a different reaction,” he said. Foreigners, he said, might think: ‘”Well then, I’d rather not come to Cape Town.’”

The city wants visitors to follow the same guidelines given to residents, including brief showers and fewer toilet flushes. Hotels have removed bath plugs and ask guests to use towels more than once, reducing laundry loads.

International tourists make up only 1 percent of Cape Town’s population during peak season, but they support more than 300,000 jobs, according to the Wesgro agency.

It says many parts of Western Cape province have “adequate water,” including the tourist destinations of Cape Overberg and the Garden Route.