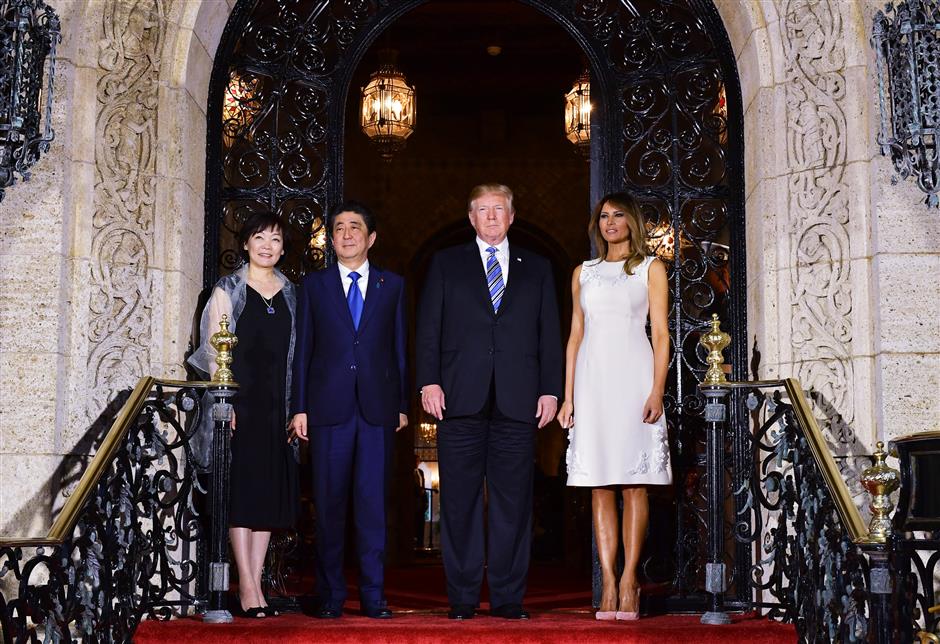 US President Donald Trump and Japanese Prime Minister Shinzo Abe on Wednesday agreed to intensify talks for "free, fair and reciprocal trade deals," but differences remained over the format of future trade deals.

"We have agreed to start talks for free, fair, and reciprocal trade deals at this time," visiting Abe said at a joint press conference with Trump at the Mar-a-Lago resort in Florida.

While Japan was aware of the United States' interest in a bilateral free trade deal, Japan continued to prefer the Trans-Pacific Partnership, a regional trade deal among Pacific Rim countries, Abe said.

"Our country's position is that TPP is the best for both of the countries. And based on that position, we shall be dealing with the talks," he said.

However, Trump said he really prefers negotiating a one-on-one deal with Japan and he doesn't want to go back into the TPP.

"Unless they offer us a deal that we cannot refuse, I would not go back into TPP. We'll see what happens," Trump said.

In January last year, Trump announced the decision to officially withdraw the United States from the Pacific trade deal in a largely symbolic move, as the US Congress hasn't approved the deal yet.

Last week, Trump made a surprise move to instruct officials to study the possibility of rejoining the TPP. But he changed its position on the TPP again earlier this week.

"While Japan and South Korea would like us to go back into TPP, I don't like the deal for the United States. Too many contingencies and no way to get out if it doesn't work," he tweeted on Tuesday.

Trump also suggested that Japan could get an exclusion from the so-called Section 232 tariffs on steel and aluminum if the two countries can reach a trade deal.

Abe was on a two-day working visit in the United States from Tuesday to Wednesday.