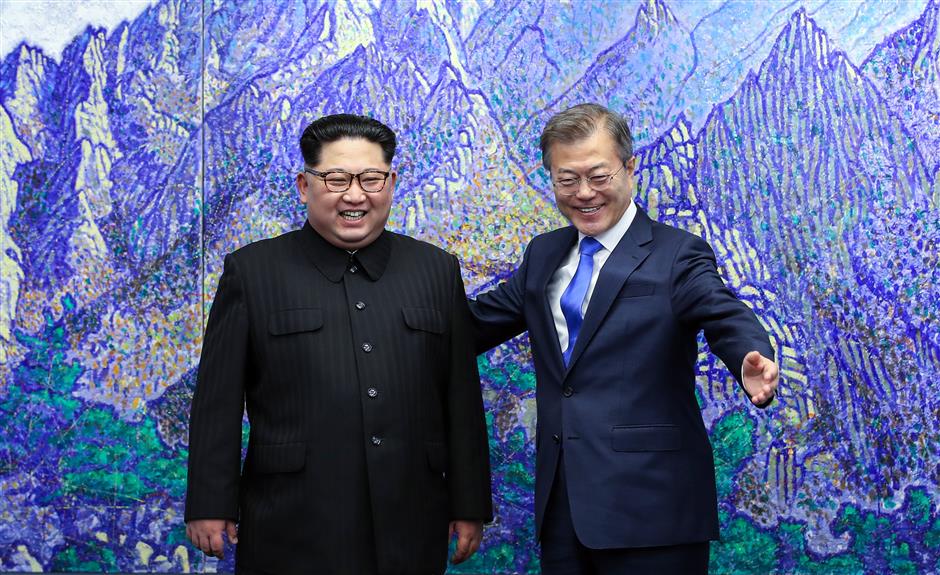 DPRK leader Kim Jong Un (left) and South Korea's President Moon Jae-in pose for a photo during their summit in the Peace House building on the southern side of the truce village of Panmunjom on April 27, 2018.

Under intense global spotlight, South Korean President Moon Jae-in and top leader of the Democratic People's Republic of Korea Kim Jong Un met in the border village of Panmunjom Friday in the hope of starting an era of peace on the peninsula.

The Moon-Kim meeting, the third inter-Korea summit, came 11 years after a previous one, at a time of warming ties between the two Koreas following initiatives by both Seoul and Pyongyang and other related parties of the Korean Peninsula nuclear issue.

The first two summits of this kind took place in Pyongyang in 2000 and 2007 respectively.

On Friday morning, Moon's motorcade arrived at the South Korean side of Panmunjom some 30 minutes before Kim's scheduled arrival at 9:30 a.m. local time.

Kim showed up at the DPRK side of Panmunjom around the schedule time and walked across the military demarcation line (MDL) dividing the border village.

The two leaders chatted and had a long handshake standing on the two sides of a low cement slab marking the land border of the two Koreas.

Kim then walked across the MDL into the South Korean side, making him the first DPRK leader to step onto South Korean soil after the end of the 1950-1953 Korea war.

They posed for the media facing both sides of the MDL and then Kim invited Moon to briefly cross the border into the DPRK side. The episode aroused applause from people at the scene.

The leaders returned to the South Korean side of Panmunjom grasping hands with each other. Beaming smiles were on their faces.

Escorted along a red carpet by a traditional South Korean honor guard, they walked to a square located between the Freedom House and the Peace House, a venue for the historic summit.

Moon and Kim inspected the honor guard there. After that, they greeted the official delegates from both sides accompanying them.

Kim walked inside the Peace House and signed a guestbook at the reception. "A new history begins now - at the starting point of an era of peace," he wrote.

The two leaders took a commemorative photo on the first floor of the Peace House and then went on the second floor for a formal talk.

"The moment Chairman Kim crossed the Military Demarcation Line, Panmunjom, became a symbol of peace, not a symbol of division," Moon said before their talks.

After the formal talks, Kim returned to the DPRK side of Panmunjom for a lunch break. The second round of formal talks between them, to be followed by a banquet, will take place in the afternoon.

The summit came after relations between Seoul and Pyongyang took a turn for the better since the start of this year, especially around the Winter Olympics in South Korea's eastern county of PyeongChang.

The two leaders are expected to discuss denuclearization and turning their truce agreement into a peace regime.

"I'm very glad that the summit is held. I want to know how the two sides can discuss a lasting peace on the peninsula and the reunion of separated families," said Oh Sun-myeong, a 47-year-old housewife in Seoul.

Commenting on the "warm breeze" blowing on the Korean Peninsula, Troy Stangarone, senior director of the Korea Economic Institute, a Washington-based non-profit policy research institution, said earlier that enormous credit should go to related countries like China "for creating the environment needed for the upcoming inter-Korean summit."

As a main stakeholder, China has been dedicated to the development of peace on the Korean Peninsula and proposed a "dual-track" approach -- advancing denuclearization and meanwhile establishing a peace regime, to relevant parties. It has urged all parties involved to promote smooth talks between the South Korean and DPRK leaders as well as the DPRK and U.S. leaders in order to reach a political settlement on the Peninsula.

"Moon Jae-in has a vision of peaceful coexistence with the DPRK. It is the right vision," Adam Mount, director of the Defense Posture Project at the Federation of American Scientists, told CNN after a live broadcast of the pre-talk activities.

Friday's summit will be followed by a meeting between Kim and U.S. President Donald Trump in May or early June.