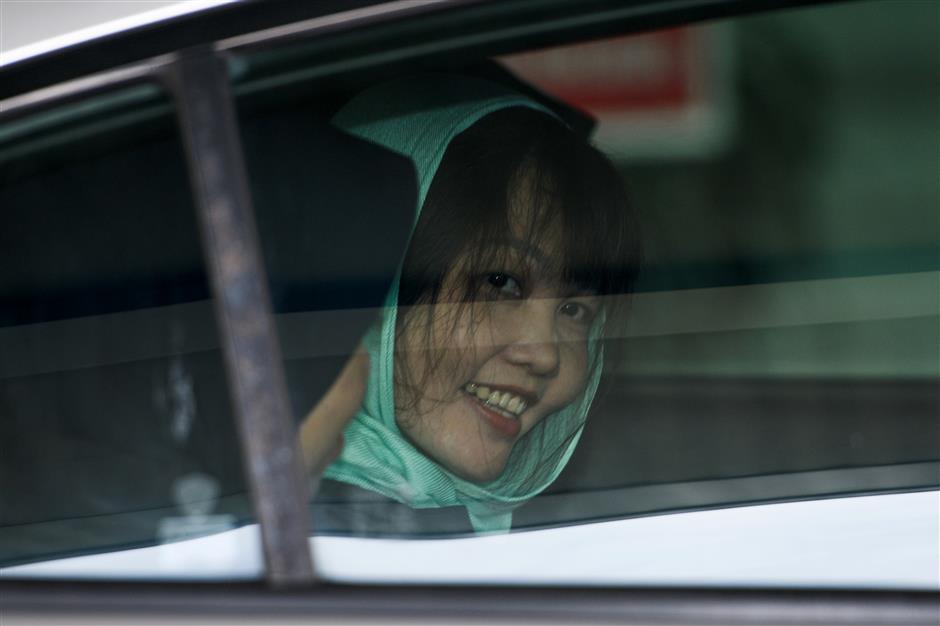 In this file photo taken on April 1, 2019, Vietnamese national Doan Thi Huong (R) smiles as she is escorted by police out of the High Court in Shah Alam.

Doan Thi Huong, a Vietnamese woman, was released early on Friday after serving time for her involvement in causing the death of a man from the Democratic People's Republic of Korea at a Malaysian airport in 2017.

Huong was discharged from prison and was escorted by Malaysian Immigration Department as part of the final procedures to be sent back to her home country.

Her lead counsel Hisyam Teh Poh Teik confirmed her release. "Yes released at about 7.20am," he said.

A Vietnamese embassy car was sighted following a vehicle believed to carrying Doan out of the prison's main entrance.

The 30-year old, along with Indonesian national Siti Aisyah, were accused for killing the DPRK man by smearing VX nerve agent on the man's face at Kuala Lumpur International Airport in February 2017. Both denied the murder charge.

In March, Malaysian prosecutors withdrew the murder charge against Siti Aisyah before releasing her. Huong's application to have her murder charge dropped was rejected by the attorney-general.

In April, prosecutors offered Huong an alternative charge for "voluntarily causing hurt by dangerous weapons or means," which she pleaded guilty to.

She was sentenced to 3 years and 4 months with two years already served since her arrest on February 15, 2017, and the remaining one-third granted remission.