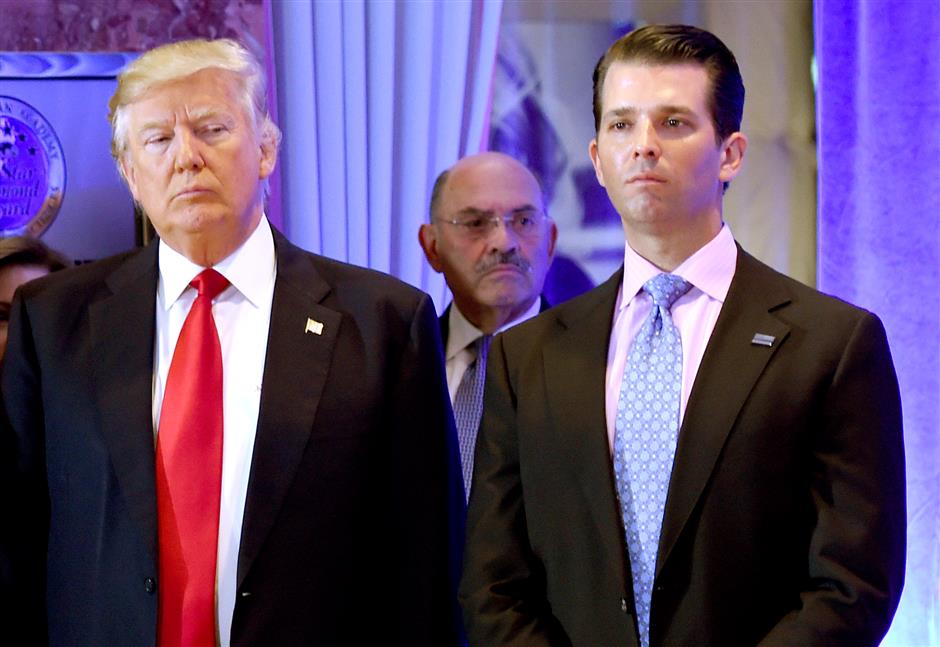 US President-elect Donald Trump along with his son Donald, Jr., arrive for a press conference at Trump Tower in New York on January 11, 2017.

The Russia probe plunged Washington into turmoil Wednesday as Donald Trump's son reportedly was ordered to testify before a Senate panel and the White House refused to release material on investigations into the president.

A day after the top Republican in Congress called the Russia probe "case closed," Trump's conflict with his Democratic opponents escalated to new heights as a House panel voted to hold the nation's Attorney General Bill Barr in contempt for refusing to turn over key documents.

Following a day of drama that included Trump asserting his executive privilege for the first time in his presidency, the Republican-led Senate Intelligence Committee took the surprise step of issuing a subpoena to Donald Trump Jr to testify as part of its investigation into Russian election interference, US media reported.

It was the first known legal summons issued to a member of the president's family to force testimony in the ongoing investigation, and comes after special counsel Robert Mueller declined to accuse Trump's 2016 campaign of criminal conspiracy to collude with the Russians.

Trump Jr, 41, has testified voluntarily in private once to the committee, and was peppered with questions about a June 9, 2016, meeting in Trump Tower in New York that he and other campaign officials had with a Russian lawyer who had offered them dirt on Democratic presidential candidate Hillary Clinton.

Committee aides would not confirm the subpoena or what they want to discuss with the president's eldest son, who currently helps run the Trump Organization.

Citing a person close to Trump Jr, The Wall Street Journal reported he had offered to answer questions in writing from the committee, and planned to fight the subpoena, which demands he testify in person.

The White House meanwhile has been seeking to shield a large swathe of material — including redacted portions of Mueller's report — subpoenaed by lawmakers seeking to exert their oversight responsibility.

The rare move to invoke executive privilege came as the House Judiciary Committee took its most substantive step yet against a member of the Trump administration by approving a contempt motion against Barr.

"This was a very grave and momentous step we were forced to take today," committee chairman Jerry Nadler said after the party-line vote.

Nadler said the contempt citation will proceed "rapidly" for a full House vote but did not offer a timeline.

Nadler accused Trump and the White House of stonewalling by preventing America's congressional representatives from conducting oversight of the executive branch.

"It's an attack on the essence of our democracy," Nadler said. "We are now in a constitutional crisis."

Hours earlier, Trump made clear he would assert his executive privilege to keep Mueller's full report under wraps.

Assistant Attorney General Stephen Boyd stressed that Trump had moved to keep "the entirety of the subpoenaed materials" from the eyes of Congress.

Nadler warned that such action "represents a clear escalation in the Trump administration's blanket defiance of Congress's constitutionally mandated duties."

Democrats have struggled with their battle plan in the wake of the Mueller report. Some have called for impeachment proceedings against Trump, while others stress the need to refocus on issues affecting everyday Americans ahead of the 2020 election.

The administration has been resolute in accusing Democrats of seeking to tear down the president.

House Speaker Nancy Pelosi, Trump's nemesis in Congress, has refrained from calling for his impeachment.

But on Wednesday she voiced support for the contempt move, and delivered a stinging message about the White House refusal to release the unredacted report, a document that Trump claimed exonerated him of wrongdoing.

"Is this what it looks like when you have nothing to hide?" Pelosi tweeted.

For several hours in the tense judiciary hearing, lawmakers traded barbs about Barr's brazen protection of the president and the calculated effort by Democrats to punish him and gain access to key material.

Trump took to Twitter to rail about Mueller's two-year investigation.

"TREASONOUS HOAX!" Trump boomed, a reference to a favorite complaint that the probe was an unwarranted political hit job by his opponents.

Barr defied a subpoena to turn over a complete copy of Mueller's report and the underlying evidence, and last week refused to testify before the House Judiciary Committee.

The panel approved the 27-page contempt citation in which Nadler wrote that even the redacted report "offers disturbing evidence and analysis that President Trump engaged in obstruction of justice at the highest levels."