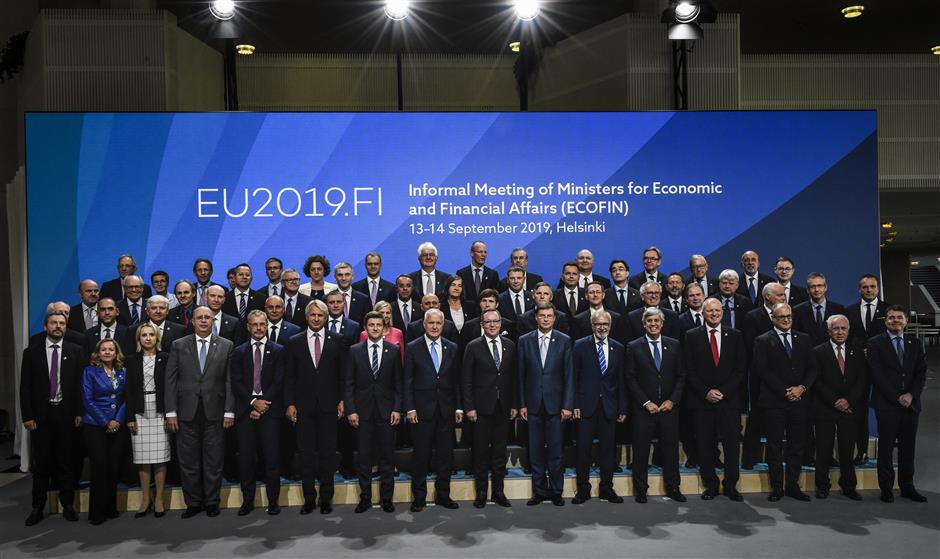 Participants pose for a family photo during the informal meeting of ministers for economic and financial affairs (Ecofin) and Eurogroup in Helsinki, Finland, on September 13, 2019.

Preparedness for hybrid threats and the financial impact of the climate change were key themes during Friday's informal meeting of EU countries' ministers for economic and financial affairs in Helsinki.

Mika Lintila, Finnish Finance Minister, said he was impressed about "a change of attitude" in the climate change issue, which is now being included better in the work of the finance ministers. Energy taxation will be discussed on Saturday.

Valdis Dombrovskis, Vice President of the European Commission, said at a press conference after the meeting that the change requires the contribution of both the private and public sectors.

He said the European Commission would come up with definitions of sustainability that can be used in determining the quality of investments, in relation to the climate change.

"Our discussions on hybrid threats show that we all share a sense of urgency when it comes to ensuring that our financial institutions are resilient to potential attacks," Dombrovskis said.

A concrete example that reveals the vulnerability in Europe is the fact that bank transactions of a country often are handled outside its borders. Typically, a credit or debit card usage in Finland could be processed far down in continental Europe.

The conclusion from the meeting was that tests of risks are needed and reports on incidents should be harmonized.

The finance ministers of the eurozone countries, along with those countries that want to join the euro, also conferred in Helsinki as a group.

The meeting reflected increased pressure towards those countries that have a surplus to contribute to possible recovery measures.

The chairman of the euro group, Mario Centeno from Portugal, told media that eurozone countries will "coordinate their policies", but did not give details.

He said the view is positive, despite "all uncertainties". "When a new downward cycle is ahead, we must find a new balance and fiscal policies have a role there."

Dombrovskis said that "monetary policy cannot do everything" and that fiscal policies are needed.

In a separate press conference, Bruno Le Maire, the French Minister for Finance, singled out "Germany, the Netherlands and Finland" as countries that could introduce recovery measures through larger investments.

"Now is the time to invest at national and European levels in new technology and innovations," Le Maire said.

Lintila disagreed, however. He told Finnish media that, taken the Finnish demographic structure, Finland should now be building buffers for the future.

On Thursday, the European Central Bank called on governments to use fiscal policies in addition to the fresh ECB monetary stimulus package to support ailing growth.