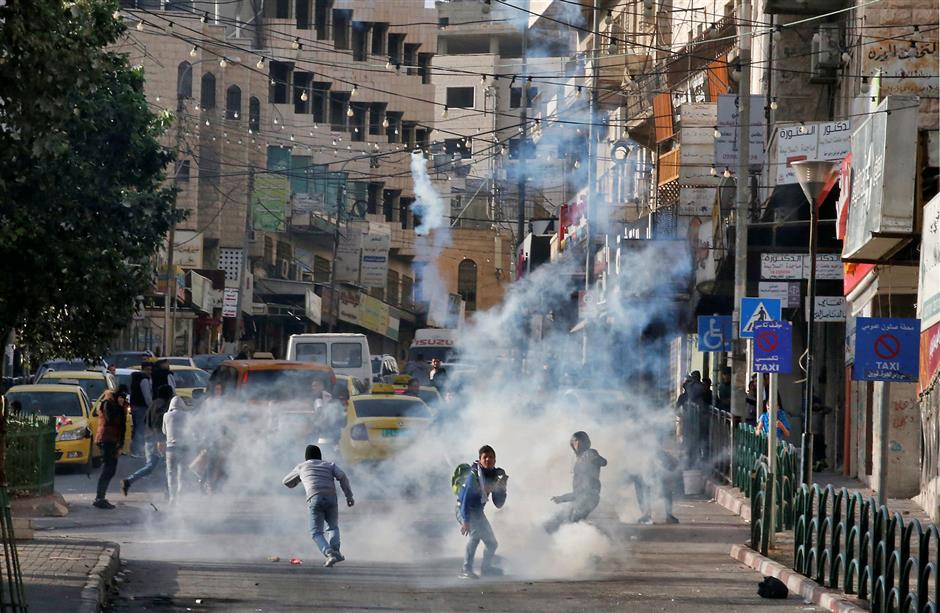 Palestinian youths run from tear gas smoke fired by Israeli security forces on November 26 during clashes in the West Bank city of Hebron.

UN Secretary-General Antonio Guterres on Wednesday said the Israeli settlement activities in the occupied Palestinian territories have "no legal validity" and constitute "a flagrant violation" of international law.

"Resolving the Israeli-Palestinian conflict remains one of the most intractable challenges facing the international community. Regrettably, over the past year, there have been no positive developments, and the situation on the ground continues to deteriorate," Guterres said in his message for the International Day of Solidarity with the Palestinian People.

The message was read by his chef de cabinet Maria Luiza Ribeiro Viotti to a meeting held by the UN Committee on the Exercise of the Inalienable Rights of the Palestinian People to observe the international day.

The UN chief said the intensification of illegal settlements, demolitions of Palestinian homes and the pervasive suffering in Gaza must stop. "These actions threaten to undermine the viability of establishing a Palestinian state based on relevant United Nations resolutions."

At the same time, he said, the indiscriminate launching of rockets and mortars toward Israeli civilian populations must cease.

He called on Israelis and Palestinians, and all their supporters, to take steps that will restore faith in the two-state solution. "There is no viable alternative."

He stressed that only constructive negotiations between the parties, in good faith, with the support of the international community and adhering to long-standing UN resolutions and long-agreed parameters "will bring about a just and durable solution, with Jerusalem as the capital of both states."

Viotti, for her part, stressed the importance of addressing "the immense" suffering of civilians in Gaza where some two million Palestinians live in poverty and unemployment, with restricted access to healthcare, education and basic services, and impacted daily by Israeli-imposed closures.

She said Palestinians in Gaza have the right to protest peacefully and Israeli security forces have a responsibility to exercise maximum restraint.

She also noted indiscriminate launching of rockets and incendiary devices toward Israeli civilian populations should stop.

Some eight million Palestinians live primarily in territories occupied by Israel and across the Middle East in countries such as Jordan, Lebanon and Syria.

UN General Assembly President Tijjani Muhammad-Bande, in his remarks, called for action to ensure critical humanitarian support for the refugees in need.

"This must be tackled by strengthening the UN Relief and Works Agency for Palestine Refugees in the Near East (UNRWA), to ensure that it can meet the humanitarian needs of over 5.4 million Palestinian refugees," he said. "It is important that we collectively safeguard the agency against the political and financial challenges it faces."

In addition, he noted that Wednesday's commemoration "reminds us that we have a collective task of resolving the lingering Palestinian issue. This is important given that for about seven decades, the question of Palestine has remained unresolved."

"It is the civilians who suffer the most from the violence, killings, incitement, demolition, illegal settlement activities and so on. We must work with utmost sense of justice and faith in this matter," he urged.

The International Day of Solidarity with the Palestinian People is an annual observance designated by the UN General Assembly on December 2, 1977, to commemorate its adoption of a resolution on November 29, 1947, to partition the mandate of Palestine into two states.

Events commemorating this date are held at the UN headquarters in New York and UN offices in Geneva, Nairobi and Vienna and other cities around the world.