US to spend US$50b, buy oil amid virus economic pain 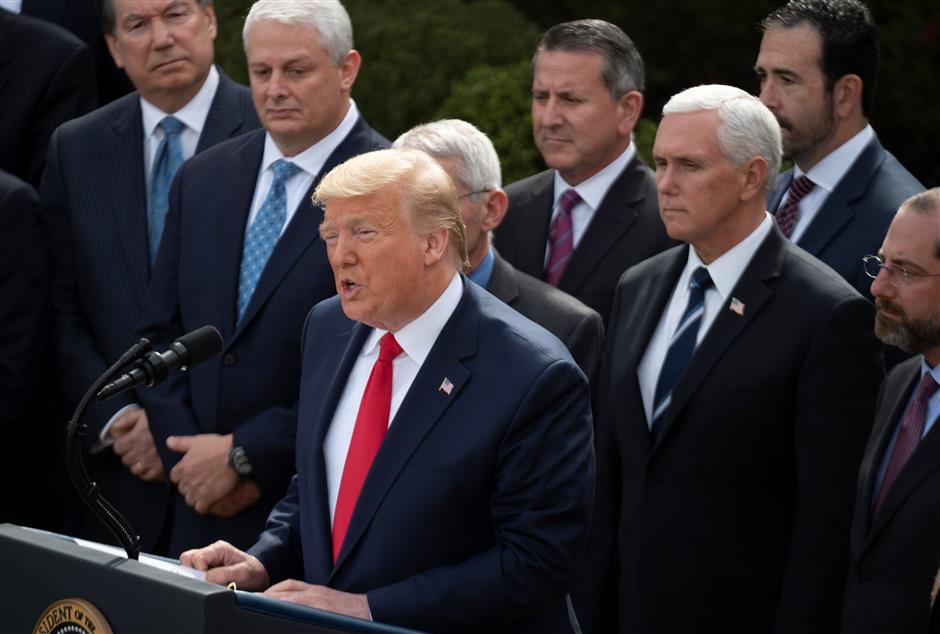 With the economy reeling, US President Donald Trump on Friday declared a national emergency to stem the damage from the coronavirus, unlocking US$50 billion in federal spending while also unveiling plans to stockpile oil and waive interest payments on student loans.

Hours later, House Democratic leader Nancy Pelosi announced she had reached an agreement with the White House on stimulus legislation to help people impacted by the outbreak, something economists say is critical to prevent an economic downturn.

Trump's speech cheered Wall Street and sent the Dow up 9.3 percent, much needed good news after a week that saw the index suffer its worst day of trading since 1987 and the Federal Reserve inject US$1.5 trillion into money markets to keep the financial system running.

"The action I am taking will open up access to up to US$50 billion... for states and territories and localities in our shared fight against this disease," Trump said.

With oil prices hammered by the outbreak, Trump said the US will also "purchase at a very good price large quantities of crude oil" for storage in the Strategic Petroleum Reserve emergency stockpile, a move that could help US producers.

"We're going to fill it right up to the top, saving the American taxpayer billions and billions of dollars," Trump said, but gave no specific amount or timing for the oil purchase. The SPR most recently held 635 million barrels of its capacity of 713.5 million.

Oil prices have fallen into the low US$30 range from more than US$50 a barrel a month ago amid concerns about falling demand and a spat between Russia and OPEC that prevented producers from reaching an agreement to cut output.

Trump also announced the waiving of interest payments on student loans as universities close temporarily, and "relief" from tax deadlines for individuals and businesses impacted by the epidemic.

Separately, the president said he asked major cruise lines to halt trips from US ports for the next 30 days following coronavirus outbreaks on several vessels.

Pelosi said the House proposal would make coronavirus testing free and expand paid sick leave and unemployment insurance, the kinds of safety nets many Americans lack that experts fear could lead them to spread the virus by going to work.

However, there was no immediate word on an agreement from the White House. Treasury Secretary Steven Mnuchin discussed the planned stimulus bill with Pelosi numerous times over the past two days, including while Trump was speaking.

Flanked by executives from healthcare companies and retailers, Trump outlined his own moves to expand testing amid widespread criticism that the US has lagged behind other countries.

He called on states to partner with the private sector to further improve diagnoses and set up drive-through testing sites at hospitals.

The fear surrounding the pandemic has pushed Wall Street indices into a bear market, while efforts to contain its spread shut down Disneyland and Broadway, and led major sports leagues to cancel or postpone their seasons.

Mnuchin called the economic impact "short-term" and said "we will get through this."

Last week, the Federal Reserve made an emergency interest rate cut, and on Wednesday is expected to lower the benchmark borrowing rate again, possibly cutting all the way to zero to counteract the economic damage from the virus, but economists say that will not be enough without government spending measures.

The University of Michigan's monthly consumer sentiment survey showed Americans are worried by the impact of COVID-19 on the economy, and its chief economist Richard Curtin calling for immediate stimulus.

"To avoid a recession, speed is more essential than targeting," he said in a statement.

The COVID-19 virus has killed more than 5,000 people as of Friday and spread globally with cases topping 140,000, according to an AFP tally.

Health authorities have warned that the outbreak is already well-entrenched in the US: The state of Ohio likely has more than 100,000 people carrying the virus, its health department says.

Multiple states have ordered schools closed and Louisiana has become the first state to postpone its Democratic presidential primary election, while US airlines have announced further steps to ground planes.