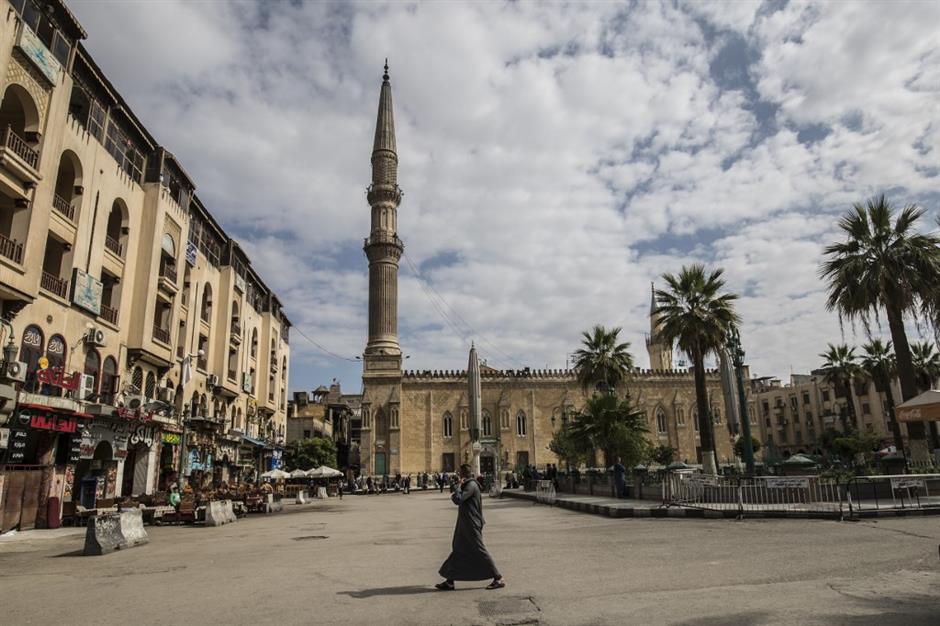 A man walks in the vicinity of the closed al-Hussein mosque in Egypt's capital Cairo on March 20, 2020, after the country's Muslim religious authorities decided to put the Friday prayers on hold, in order to avoid gatherings and the spread of the novel coronavirus COVID-19 disease.

Egypt's religious authorities ordered Saturday the closure of all mosques and churches and banned communal prayer gatherings to try and stem the spread of the novel coronavirus.

The decision taken by the ministry of religious endowments, which oversees mosques nationwide, and the Coptic Orthodox Church will run for at least two weeks.

In separate statements, the ministry and the church said the move is aimed at avoiding large gatherings such as prayers and mass, where the risk of contamination could be high.

The religious endowments ministry said in a statement it "decided to halt prayers and to close all mosques... starting today (Saturday) and for two weeks".

It urged worshippers to pray at home.

The Coptic Orthodox Church said it ordered "the closure of all churches, suspension of ritual services, masses and activities".

The decision, including a ban on visits to monasteries nationwide, "is effective from Saturday for two weeks... and until further notice", it said.

Egypt has so far has recorded eight deaths out of 285 confirmed cases of coronavirus.

Authorities have imposed tough measures to limit social interaction in the country of 100 million inhabitants, where Christians represent around 10 percent of the population.

They have closed schools and universities, ordered the overnight closure of cafes, restaurants, nightclubs, sporting clubs and malls, and reduced the number of public sector employees.

Egypt has also halted air traffic from Thursday until the end of March.