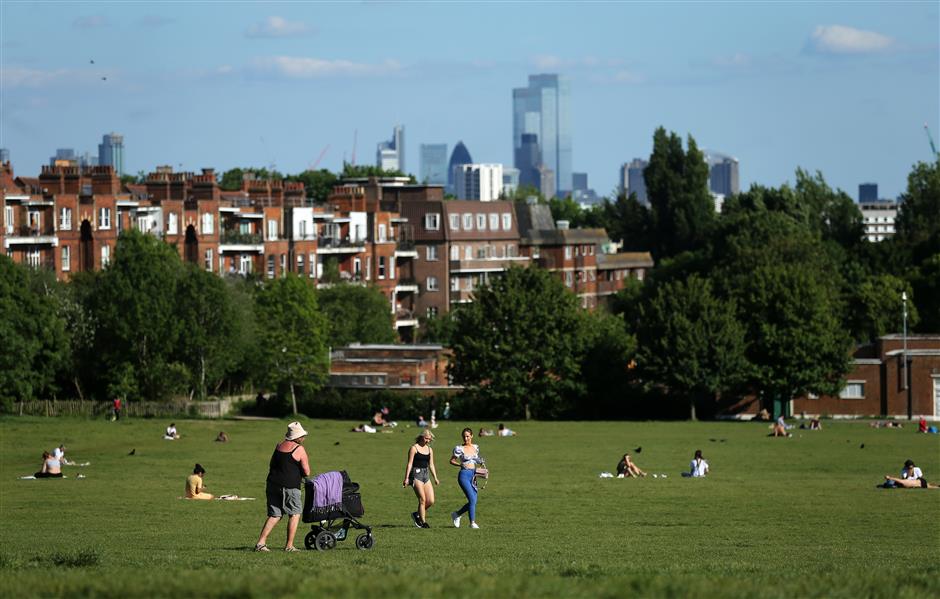 People enjoy the afternoon sunshine on Hampstead Heath, north London, backdropped by the skyline of the City of London, on May 19, 2020.

Another 545 COVID-19 patients have died in Britain as of Monday afternoon, bringing the total coronavirus-related death toll in the country to 35,341, Environment Secretary George Eustice said on Tuesday.

"We are likely to face a severe recession, the likes of which we haven't seen, and of course that will have an impact on employment," said Sunak while addressing the Lords economic affairs committee.

"We are currently passing through" that period that is defined by two consecutive quarters of negative economic growth, he added.

The Office for National Statistics (ONS) announced on Tuesday that the number of people claiming jobless benefit in Britain monthly soared by 69.1 percent in April as the labor market was hit by the COVID-19 pandemic.

Data showed that the country's Claimant Count, a statistic of the number of people claiming benefit principally for being unemployed, increased to 2.1 million in April, representing a monthly rise of 69.1 percent.

Chairing Tuesday's Downing Street briefing, Eustice told reporters that the government "will only take the next step when we are satisfied it is safe to do so" to gradually ease the lockdown.

Talking about the availability of foreign labour for the harvest, he said normally workers from countries like Romania and Bulgaria come during the harvest season, but only around a third of them are here now.

A new "pick for Britain" website has been launched to check what jobs are available during the harvest and match employers with people seeking a job — particularly those who have been furloughed, said Eustice.

He urged people who want to get out, to play a part in the virus response and supplement their income to visit the website.

As to the new track and trace program, the secretary told reporters that testing capacity has been "expanding" and more than 20,000 people have been hired to staff the program, which he believes will be "quite crucial."