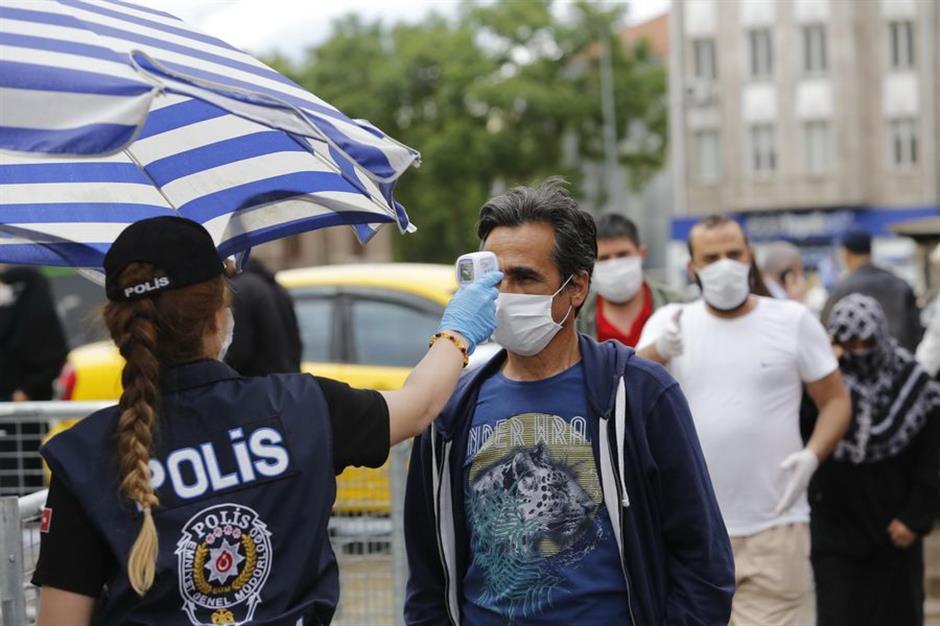 A policewoman checks a man's body temperature at the entrance of a shopping mall in Ankara, Turkey, on May 22, 2020.

Turkey's COVID-19 cases on Sunday exceeded 156,000. Meanwhile, Chinese medical experts in Algeria shared with Chinese people in Tunisia the experience in the prevention of the coronavirus via a video conference.

The total number of COVID-19 cases in Turkey, the hardest-hit country in the Middle East, increased to 156,827 after 1,141 new infections were reported, Turkish Health Minister Fahrettin Koca tweeted.

The death toll from the coronavirus in the country rose to 4,340 after 32 new fatalities were added in the past 24 hours, he said, adding that 1,092 more patients recovered, bringing the overall number of recoveries to 118,694.

On the same day, Chinese medical experts in Algeria answered questions related to COVID-19 during a video conference which was participated by workers from Chinese companies and Chinese people living in Tunisia.

At the invitation of the Algerian government, the Chinese medical expert team arrived in Algeria on May 14.

The country also reported 58 new deaths from the virus on Sunday, raising the death toll to 7,417. A total of 105,801 coronavirus patients have recovered, with 2,615 still in critical condition.

The United Arab Emirates (UAE) announced 781 new COVID-19 cases and one more death, raising the tally of infections to 29,485 and the death toll to 245.

The total number of recoveries from the virus in the UAE rose to 15,056 after 561 more patients fully recovered.

Kuwait reported 838 new cases and eight more deaths, raising the country's total number of infections to 21,302 and the death toll to 156.

The country's tally of recoveries hit 6,117 after 370 more patients recovered.

Egypt's coronavirus cases soared to 17,265 after 752 new infections were added.

The country witnessed a record of 29 daily new fatalities of COVID-19, raising the death toll to 764. The Egyptian Health Ministry also reported 179 more cases of recoveries, increasing the total recoveries to 4,807.

The North African country has received three batches of medical aid from the Chinese government to help its fight against the COVID-19 pandemic.

Israel reported five new COVID-19 cases, the lowest single-day rise in the country since March 7, bringing the tally of coronavirus infections to 16,717.

It is worth noting that the death toll from COVID-19 in Israel remained 297 as no new death case has been recorded for four consecutive days.

Oman's Ministry of Health announced 513 new cases of infections, bringing the total number of COVID-19 cases in the country to 7,770, including 36 deaths and 1,933 recoveries.

In Morocco, the tally of the coronavirus infections increased to 7,433 after 27 new cases were added, which included 199 fatalities and 4,703 recoveries.

Iraq confirmed 197 new coronavirus cases, bringing the total number of infections to 4,469, of whom 160 have died and 2,738 recovered.

In the mean time, the Iraqi Health Ministry said that further health preventive measures will be taken next week after the holiday of Eid al-Fitr, including maintaining the partial curfew to help curbing the spread of the coronavirus pandemic.

Iraq has received batches of medical aid from China and the support from a team of Chinese medical experts during their 50-day stay.

In Lebanon, the number of COVID-19 infections increased by 17 to 1,114, while the death toll remained unchanged at 26.

Meanwhile, the total number of COVID-19 cases in Yemen's government-controlled provinces increased to 222, as 10 new cases were confirmed.

The death toll of the pandemic climbed to 42 in different areas of the government-controlled provinces, including the southern port city of Aden.

So far, the pro-government health authorities have recorded 10 recoveries.

In Syria, 16 new cases were recorded, raising the overall number of infections in the country to 86 which included four fatalities and 41 recoveries.