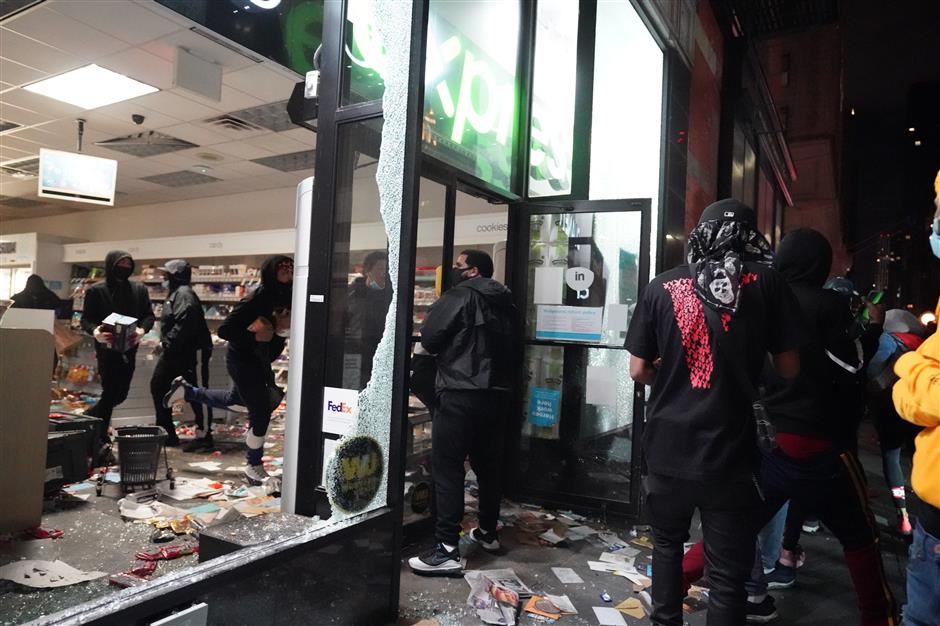 People loot a store on June 1 in New York during demonstrations over the death of George Floyd by a Minneapolis police officer.

New York was under a curfew that would last until early Tuesday morning, officials said, after looters raided stores in central Manhattan, targeting some of the city's top retailers.

Upmarket fashion store Michael Kors on Fifth Avenue was among the luxury outlets hit, along with Nike, Lego and electronics shops across Midtown, before the 11pm - 5am curfew came into effect, AFP journalists said.

Groups of young people moved from block to block around the district, usually bustling with tourists but deserted due to the novel coronavirus, with entire streets blocked by police.

Images from local NY1 television showed some young people running out of a Best Buy electronics store before being apprehended by the police.

Stores in the south of Manhattan suffered a similar fate, according to an AFP photographer.

The New York Times reported that the flagship Macy's department store had also been targeted by looters.

Police did not immediately confirm this, simply saying that "numerous stores were hit" and arrests made "in the hundreds" across the city.

Mayor Bill de Blasio said a lot of stores around Madison Avenue had been hit and the situation was "really not acceptable."

As a result, he said, the curfew would start from 8pm on Tuesday instead of 11pm.

"The city is fully under control, and overwhelmingly calm and peaceful," he nevertheless insisted on NY1.

The imposition of the curfew had been announced a few hours earlier by the mayor and New York state governor Andrew Cuomo after protests and looting during the weekend — notably in the trendy SoHo district.

The mayor tweeted late on Monday that "protesters were overwhelmingly peaceful today" but that some people were out to damage property and steal.

"We support peaceful protest in this city. But right now it's time to go home," de Blasio said.

"Some people are out tonight not to protest but to destroy property and hurt others — and those people are being arrested. Their actions are unacceptable and we won't allow them in our city."

New York, the economic capital of the United States, and around 40 other cities across the country have imposed curfews after violent protests against police brutality triggered by the death of African-American George Floyd in Minnesota.

Just after 11pm, around a hundred people held a peaceful demonstration in front of the Barclays Center in Brooklyn, the scene of major protests in recent days, taking a knee in tribute to victims of police brutality, according to an AFP journalist.

Police observed them from a distance but did not arrest anyone despite the curfew.

While looters hit New York, in Washington President Donald Trump said he was "dispatching thousands and thousands of heavily armed soldiers, military personnel and law enforcement officers to stop the rioting, looting, vandalism, assaults and the wanton destruction of property."

"I don't think it's a statement from the last few hours that has caused all this, I think it's what he's done for years that has contributed," he said.