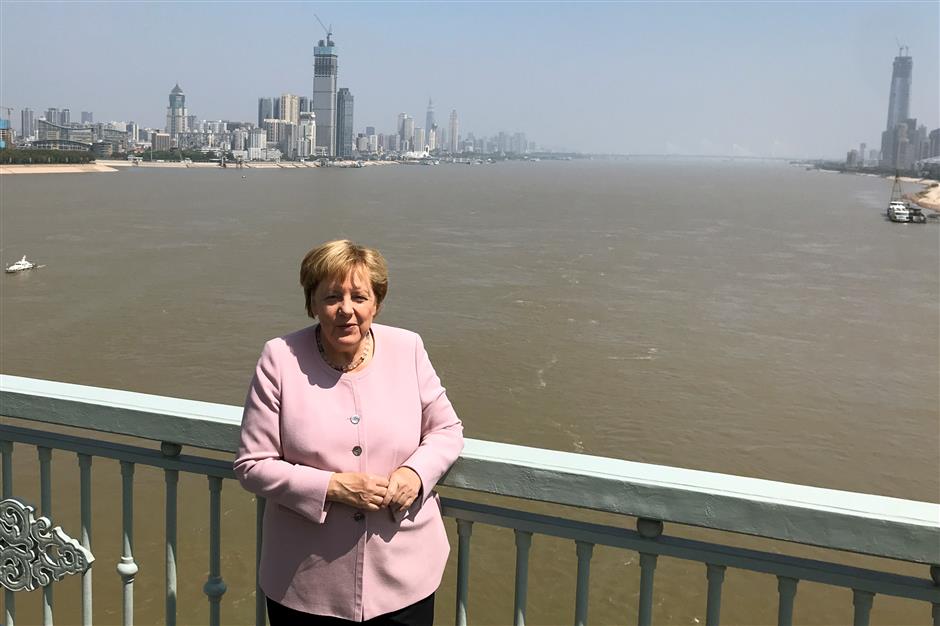 Traveling in a convoy through Wuhan, central China’s Hubei Province, last September, Angela Merkel called a halt. As her party crossed a bridge over the Yangtze River, the German Chancellor wanted to hear about a grand gesture by late Chairman Mao Zedong.

She posed for a picture on the bridge over the river where, in 1966, Mao joined an annual swim down the river in a demonstration of his vigor and leadership. It was only a quick photo opportunity, but the Wuhan visit helped shape Merkel’s response to COVID-19, three people close to the chancellor said.

To many in the West, Wuhan is a remote place. Merkel saw at first hand a major thoroughfare and busy hub of China’s industrial power. If the disease was serious enough to force a metropolis of 11 million people to quarantine itself and come to a complete stop, people close to her said, she saw it must be serious.

Merkel — unlike leaders including British Prime Minister Boris Johnson and US President Donald Trump — supported a quick lockdown and widespread testing. These are two elements that have been widely credited by epidemiologists for keeping Germany’s reported fatalities lower than many countries, especially outside Asia. Germany has reported almost 9,000 COVID-19 deaths, versus more than 110,000 in the United States and over 40,000 in the United Kingdom. On a per capita basis, the German toll is one-third that of America and one-sixth that of the UK.

Her response boosted her image: Around 66 percent of Americans think Germany has done a good job of tackling the virus, according to a survey from late April and early May by the Pew Research Center. At home, support for her conservative bloc has risen from 26 percent in early March to 40 percent now, surveys by pollster Forsa show. The ecologists Greens have been the main casualty. The nationalist Alternative for Germany has also slipped back, to 8 percent.

It’s a story that shows how, in Germany as in the US and elsewhere, COVID-19 is exposing deep tensions between states’ nationalist and collaborative styles of leadership.

Trump, after initially praising China’s reactions, changed tack as the pandemic progressed and said he would cut ties with the World Health Organization.

Germany also briefly turned inwards, banning exports of medical supplies, but then reversed that. Merkel spoke out to defend international alliances which are working to develop a vaccine.

“The difference between these approaches is stark,” said Thomas Kleine-Brockhoff, vice president at the German Marshall Fund of the US, which promotes US-European ties.

“It represents the difference between nationalism and internationalism.”

When the virus hit Europe, its early outbreaks were in Italy and France. “The virus did not come unnoticed to Germany,” Merkel’s chief-of-staff Helge Braun said. “We could prepare ourselves.”

To fight the virus at home, though, Merkel had to calibrate her actions with the interests and views of the leaders of the country’s 16 regions.

This is because under Germany’s federal system, almost all responsibility — and power — in a health crisis is held at state or municipal level.

Everyone was concerned about the economy. China is Germany’s biggest trading partner, and goods worth 206 billion euros (US$230 billion) were traded between the two countries in 2019, German Statistics Office figures show.

Merkel’s visit to Wuhan helped those who were with her — two dozen CEOs of small and large companies — understand the potential consequences of the disease, said Joe Kaeser, CEO of Siemens AG, who was among them.

He said that as early as January 12, on the top floor of the Axel Springer highrise in Berlin, the subject came up in talks on the sidelines of a meeting among business leaders and politicians. “We were mentally prepared because we deal with China more intensively than, say, the US or many of our European partners,” Kaeser stated.

On January 22, a day before the Wuhan lockdown, Merkel had a phone call with Chinese President Xi Jinping to discuss Germany’s coming presidency of the European Union and trade issues.

Days later, its first known cases of COVID-19 arose in a Bavaria-based company that Merkel had visited in Wuhan.

On January 27, German car parts maker Webasto Group, whose Wuhan office Merkel had opened, went into full containment mode after a visiting Chinese colleague tested positive. She inquired about how many people in Webasto were infected and how, the people close to her said.

In February, Merkel met privately with China’s Foreign Minister Wang Yi in Berlin. He informed her of the measures China had taken, sources close to her said. Germany sent protective gear and clothing and disinfectant to China.

Berlin kept up this dialogue. Meanwhile, as US outbreak intensified and the White House came under fire over its response, Trump ramped up criticism of China, calling the disease “the China virus” and threatening new tariffs.

Asked to comment, China’s foreign ministry said that it and Germany had worked together and helped each other in the coronavirus fight, adding that the WHO as an international institution cannot serve only one country. “At present, the suppression or even blackmail of the WHO by some countries lacks the minimum humanitarian spirit and will not be accepted by the international community,” it said in a statement.

In early March, an explosion in COVID-19 cases strained Italy’s health service and prompted a nationwide lockdown. German infections were growing more slowly and there was no consensus for dramatic action. The German media criticized Merkel as slow to speak out about the virus while her health minister and chief-of-staff took the lead. Regional leaders were at odds over how seriously to respond, those involved said.

Then on March 11, the WHO declared the disease a pandemic.

The next day, Merkel called the heads of Germany’s regions to a meeting at the chancellery. She also invited Germany’s top virus experts, asking them to present their views first, people who were at the meeting said.

Three scientists warned that even Germany’s well-supplied hospitals could be overburdened as early as June if the pace of new infections continued.

“When the three gave their lectures, the others in the room were quiet as mice,” recalled one participant.

After the presentation, all 16 state leaders agreed that only restrictions to public life could contain the virus. Merkel and the leaders announced steps, including bans on traveling in coaches, religious meetings, and tourism.

Those close to Merkel said she had waited to step in publicly until the problem justified a nationwide response.

On March 18, she hit hard. For the first time in 15 years in office, she made a TV address other than her traditional New Year’s Eve speech. Some 25 million viewers tuned in to hear her defend the measures. “Since German reunification, actually, since World War II, there has never been a challenge for our country in which acting in solidarity was so very crucial,” she told them.

Merkel, who said in October 2018 she would not seek re-election as chairwoman of her Christian Democrats party, saw her approval ratings shoot above 80 percent.

Nevertheless, as countries worldwide realized the risks of infection, many — including Germany — joined a self-interested scramble for protective gear.

On March 4, Germany’s economic and health ministries were among those banning the export of protective equipment such as masks, gloves, and suits, to try to stem panic and take control of supplies. When Italy first asked for urgent medical supplies, no EU country would help.

This ran counter to the internationalist principles Merkel had stressed.

With the export ban, Merkel later told parliament, “We shot ourselves in the foot” by erecting barriers to supplies between EU partners.

Since then, her focus has been firmly on beefing up alliances.

“This crisis can’t be solved by one country alone. We have to act together.”