Post-Brexit talk continues as both parts agree to speed up 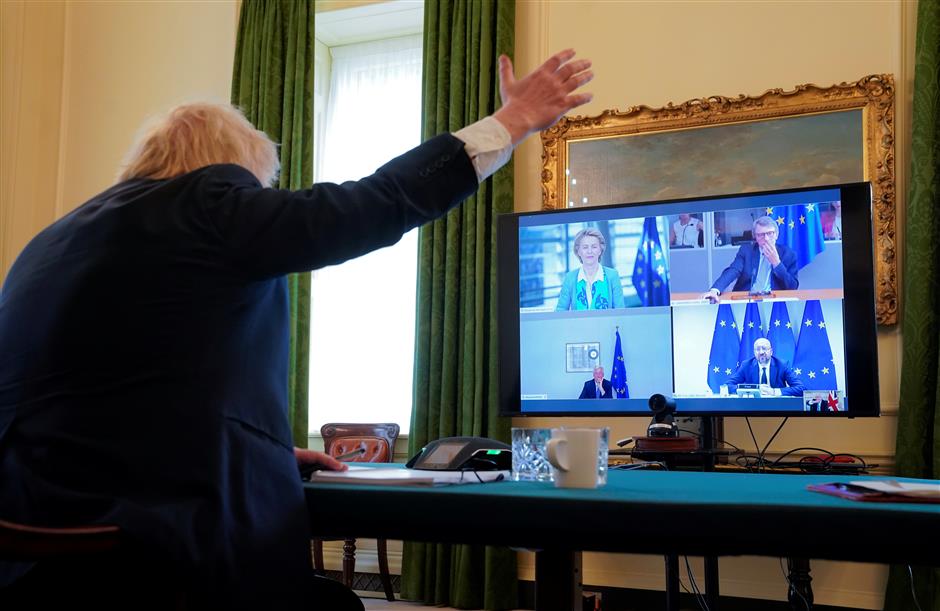 British Prime Minister Boris Johnson and EU chiefs on Monday agreed to breathe new life into their stalled post-Brexit trade talks, as both sides committed to ramp up negotiations over the summer.

Johnson made the joint UK-EU pledge with European Commission president Ursula von der Leyen and other EU chiefs after an hour-long video conference called to take stock of progress after three months of trade talks.

Noting that four rounds of negotiations had taken place and little progress has been made, a joint UK-EU statement said that "despite the challenges presented by the COVID-19 pandemic ... the parties agreed nevertheless that new momentum was required."

The leaders also agreed to pursue a possible "early understanding" on the broad principles of the deal, in an acknowledgement that negotiations could run out of time.

It was Johnson's first personal involvement in the talks, which began just weeks after Britain left the European Union on January 31 after 47 years in the European project.

The UK will leave the single market and stop adhering to Brussels' rules on December 31, after an 11-month transition.

So far the post-Brexit talks have achieved little, with hope on both sides that backing by Johnson and von der Leyen will be enough to revive the proceedings.

Talks led by EU negotiator Michel Barnier and his British counterpart David Frost, who both caught the coronavirus, have mostly taken place online because of the outbreak.

Negotiators complain that the format has not lent itself to making compromises and finding common ground on thorny issues.

Added pressure came after Britain on Friday formally declared that it would not seek to extend the post-Brexit transition by one or two years, something it could have done according to the terms of the divorce deal Johnson signed last year.

The same intractable issues have hampered the talks since the start.

Britain has firmly rejected calls by the EU to commit to European standards overseen by EU law to keep open access to the single market — something Brussels says would maintain a "level playing field."

"We cannot accept the UK's attempts to cherry-pick parts of our single market benefits," Barnier said in a speech on Thursday.

The EU is also asking for continued guaranteed access to British waters for European fishing fleets, an idea Britain has so far refused. Instead, they have proposed annual talks on quotas for catches.

Britain wants to keep strong business ties to the EU single market, the world's biggest — but London will not recognise any mention of EU law or court decisions in the deal, seeing that as a violation of sovereignty.

Johnson's government also refuses to discuss many topics beyond trade that the Europeans would like to have bound to the same deal.

London has side-stepped discussion on security, diplomacy, research and data flows, to the frustration of Barnier and his team.

Opinions differ on how soon a deal needs to be struck in order to give companies the visibility they need on the terms of cross-Channel trade from January 1, 2021.

The EU pushed October 31 as a deadline, while Britain has said this summer was the last chance.

The statement on Monday seemed to indicate that both sides agreed that some sort of deal in principle could be acceptable given the time constraints.

Intensified talks, it said, "should include, if possible, finding an early understanding on the principles underlying any agreement."

A deal in principle could be enough to avoid the damaging consequences of no deal on December 31 and effectively extend the negotiations beyond this year.

Failure to agree a trade deal will lead to tariffs, customs and regulatory checks and other obstacles — in effect removing Britain from Europe's supply chain.