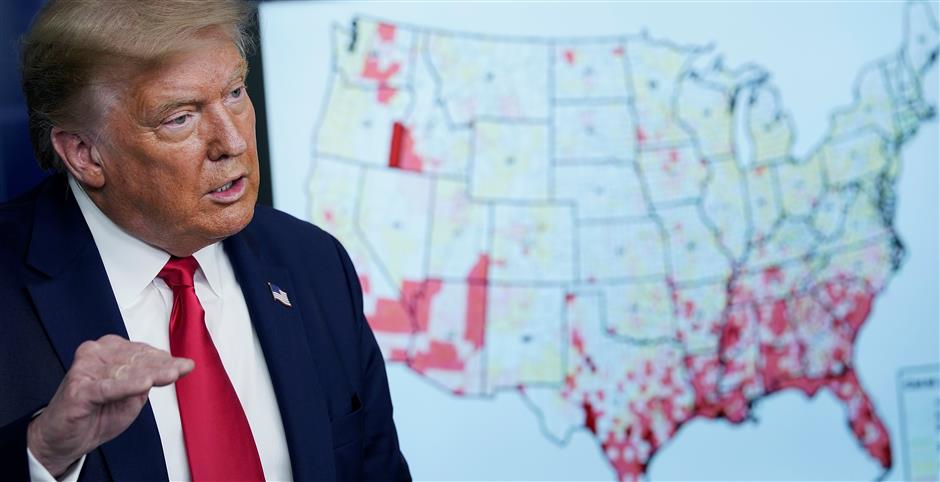 US President Donald Trump speaks during a news conference about his administration's response to the ongoing novel coronavirus pandemic at the White House on July 23.

President Donald Trump announced on Thursday he was scrapping the Republican nominating convention in Florida as the number of novel coronavirus cases in the United States topped 4 million.

Trump said he was canceling next month's event in Jacksonville because it was not the right time to do a "big, crowded convention."

"The timing for this event is not right. It's just not right with what's happened recently," he said at a White House news conference.

Trump was speaking just hours after Johns Hopkins University reported that there were now more than 4 million COVID-19 cases in the United States.

With a total of 4,028,741 cases and more than 144,000 deaths, the United States is by far the hardest-hit country in the world, with Brazil and India trailing in second and third place for infection numbers.

The country has seen a coronavirus surge, particularly in southern and western states, and Texas, California, Alabama, Idaho and Florida all announced record one-day death tolls.

Trump said convention events would be held "online in some form."

Republican delegates who will nominate him as the party's candidate in November's election against Democrat Joe Biden will gather in North Carolina for a "reasonably quick meeting," he said.

The main reason for canceling the Jacksonville event was "safety," he said.

"It's hard for us to say we should have a lot of people packed into a room and then other people shouldn't do it," he said. "There's nothing more crowded than a convention.

"I think we're setting an example."

The Republican convention had been scheduled to be held in Jacksonville from August 24 to 27 but the city has become a virus hotspot.

Trump also reiterated that he wanted schools to open in the fall.

"Being at the school, being on the campus, is very, very important," he said. "In cities or states that are current hot spots... districts may need to delay reopening for a few weeks.

"The decision should be made based on the data and the facts on the ground in each community but every district should be actively making preparations to open," he said.

Signs of hope are emerging in some regions.

The southwestern state of Arizona, which broke 5,000 daily cases in late June, has seen its infections consistently falling throughout this month and the level is now around 2,000.

Florida's new cases have been flatlining for the past week, according to a seven-day average, while the growth rate in Texas is beginning to ease.

Fatality rates remain high in all three states because of the inevitable lag time between progression of the disease and death.

The better results in some parts of the country are being offset by worse outcomes in others.

The virus continues to surge in California, the country's most populous state, which on Wednesday reported its highest number of infections with nearly 13,000 new cases.

Some other states, such as Missouri in the Midwest, are likewise continuing to see their daily case records broken.

Still, the national graph appears to be starting to stabilize at around 70,000 cases per day, according to a seven-day average from the COVID Tracking Project.

The United States saw an earlier plateau after its first peak in mid-April until the surge that began in mid-June.

"I think the leveling off suggests that some of the more recent efforts to ramp up testing and especially in masking and banning indoor gatherings such as bars and restaurants may be helping," said Thomas Tsai, a public health professor at Harvard.

"However, just like it was in April, leveling off is not enough — the goal is to suppress and not just mitigate."

Unless the high caseload is brought down, it will continue to place an excessive strain on hospitals, make it harder for schools to reopen next semester, and cause more preventable deaths.

Over 80 percent of all intensive care unit beds are occupied in nine states, according to data from the Department of Health and Human Services. This is considered dangerously high.

Other experts are more cautious about whether the current slowdown really reflects reality.

"I think it's much too early to tell," said William Schaffner, a health policy professor at Vanderbilt University.

"There are a lot of people who are ignoring, still, the social distancing recommendations and the masks. I'm still pretty pessimistic."