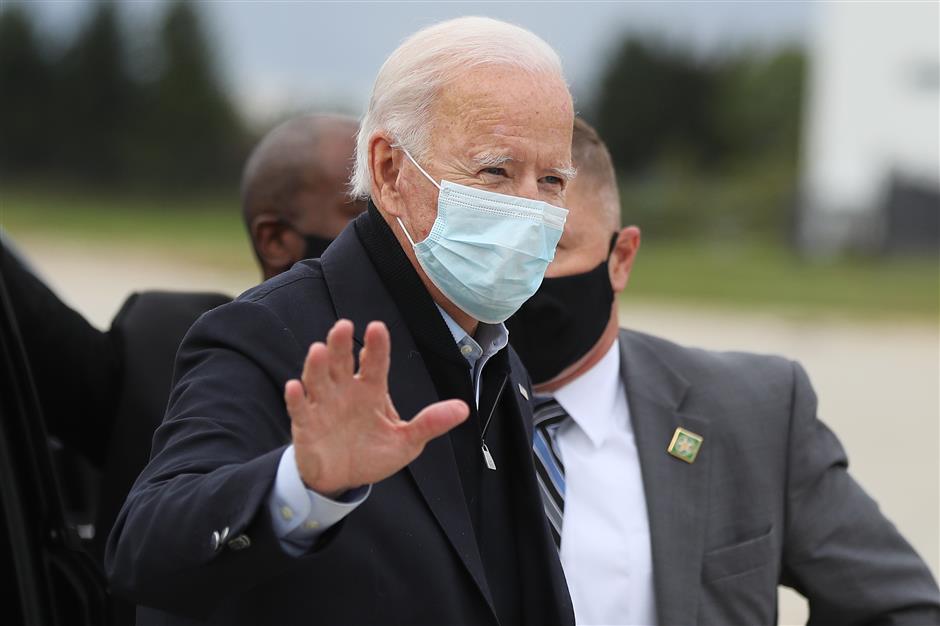 Wearing a mask to reduce the risk posed by the coronavirus, Democratic presidential nominee Joe Biden waves while preparing to board his plane at Gerald Ford Airport after campaigning on October 02, 2020, in Grand Rapids, Michigan.

2020 Democratic presidential nominee Joe Biden and his wife, Jill Biden, have tested negative for COVID-19, his doctor said on Friday.

Biden, 77, confirmed the negative results in a tweet later.

"Thank you to everyone for your messages of concern. I hope this serves as a reminder: wear a mask, keep social distance, and wash your hands," he wrote.

The couple took the tests hours after US President Donald Trump, whom Biden shared a stage with for the first 2020 presidential debate in Cleveland, Ohio Tuesday night, announced that he and his wife, Melania Trump, had contracted COVID-19.

The presidential candidates did not shake hands that night. There was a distance between their podiums. But neither Biden nor Donald Trump wore masks on stage.

White House chief of staff Mark Meadows told reporters on Friday that Donald Trump, 74, has mild symptoms but the president and the first lady "remain in good spirits."

"He continues to be not only in good spirits but very energetic. We've talked a number of times this morning," Meadows said of Donald Trump. "The doctors continue to monitor both his health and the health of the first lady."

The chief of staff also said he expects more people in the White House to test positive for COVID-19.

"I fully expect that as this virus continues to go on, other people in the White House will certainly have a positive test result," he added.

"I am looking forward to a speedy recovery," she said.

Donald Trump tweeted out the positive test results on early Friday morning after White House counselor Hope Hicks, a close aide to him, had tested positive for COVID-19.

Hicks traveled with Donald Trump multiple times this week, including aboard Marine One, the presidential helicopter, for a rally in Minnesota on Wednesday, and aboard Air Force One to the Cleveland debate.

Meadows said on Friday that they were aware of Hicks' positive diagnosis before Marine One, carrying Trump and his aides, took off Thursday afternoon for Joint Base Andrews in Maryland, from where the president flew to New Jersey for a fundraiser.

"We discovered that right as the Marine One was taking off yesterday, we actually pulled some of the people that had been traveling and in close contact," the White House official said. "The reason why it was reported out was just frankly is that we had already started the contact tracing just prior to that event."

Vice President Mike Pence and other members of Trump's cabinet have taken COVID-19 tests and the results were negative.

In addition to the Trumps and Hicks, multiple White House officials, including the president's national security adviser Robert O'Brien and Pence's communications director Katie Miller, as well as other staffers, have previously tested positive for the virus.