UK hospitals under pressure amid surge in cases 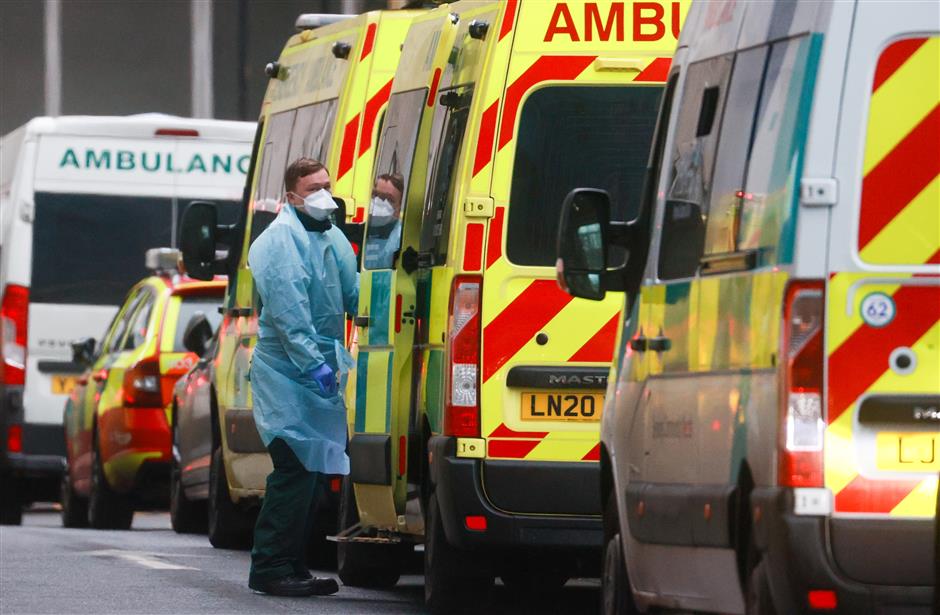 A medic stands next to an ambulance at the Royal London Hospital amid the coronavirus outbreak in London, Britain on Tuesday.

Hospital chiefs in England were scrambling for hospital beds on Thursday as the surge in coronavirus cases risked overwhelming the system, health care providers and medics said.

A leaked briefing suggested that even in a relatively positive scenario, London’s hospitals could be beyond capacity in less than two weeks.

The United Kingdom on Wednesday confirmed more than 62,000 new cases in 24 hours, with numbers growing quickly outside southeast England, where clusters of a new highly infectious strain of the virus were first identified.

Over 30,000 people were in UK hospitals with the virus, more than at the peak of the first wave.

“We’ve seen 5,000 new patients in hospital beds with COVID-19 over the past week — that’s 10 full hospitals’ worth of COVID patients ... so it’s a really big challenge.”

British Health Secretary Matt Hancock said he was concerned about the pressures on the National Health Service and the government was putting extra resources into the parts of the country under the most significant strain.

“For instance in London, (we’re) making sure that the Nightingale hospital is on standby and there, if needed. And if it is needed, of course, then it will be used,” he said, referring to a field hospital that was set up at the start of the pandemic.

England began a new national lockdown on Tuesday, with schools closed and citizens told to stay at home.