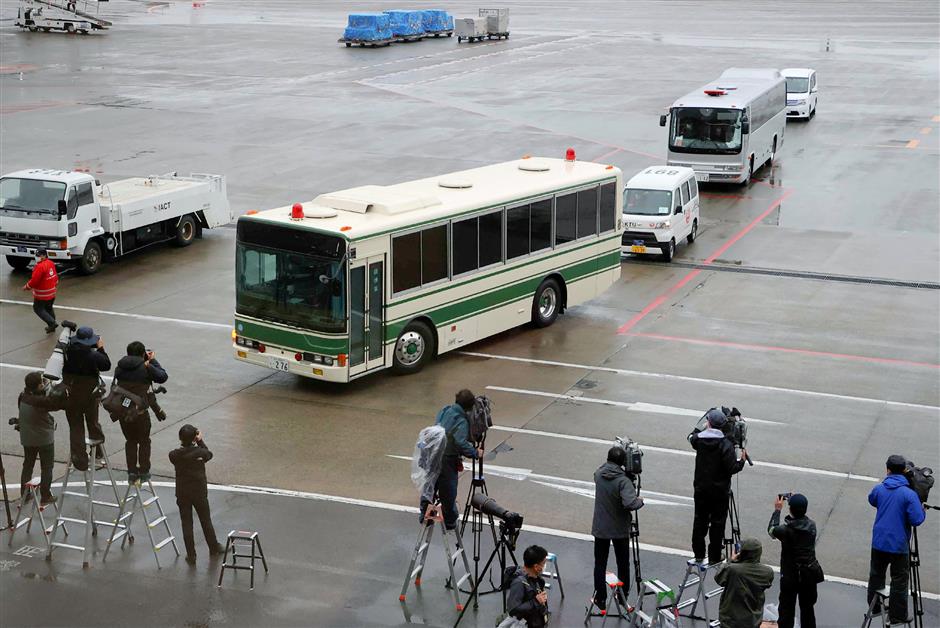 A bus (front) believed to be carrying former US special forces member Michael Taylor and his son Peter who allegedly staged the operation to help fly former Nissan chief Carlos Ghosn out of Japan in 2019, leaves Narita airport in Chiba prefecture on Tuesday following their extradition from the US.

A US father-son pair accused of helping former Nissan boss Carlos Ghosn in his audacious escape from Japan arrived in Tokyo on Tuesday after losing their battle against extradition.

In a statement, Japanese prosecutors confirmed they had arrested former US special forces member Michael Taylor and his son Peter “on suspicion of helping a criminal hide and escape.”

The pair, along with a third man still at large, are believed to have masterminded the operation that saw former international jet-setter Ghosn packed into an audio-equipment case and onto a private jet to jump bail in December 2019.

While Ghosn is now beyond the reach of Japanese justice in Lebanon, which does not have an extradition treaty with Tokyo, the Taylors were handed over to Japanese prosecutors.

The pair landed at Narita airport outside Tokyo, where officials held up silver plastic sheets to shield the arrivals from cameras.

They will be taken to a detention center after clearing immigration and taking a COVID-19 test, local media reports said.

“The two suspects, knowing Carlos Ghosn was on bail on condition that he not go abroad ... helped Ghosn to escape and concealed this,” the prosecutors said in a statement after the men arrived.

Prosecutors can now hold the pair for three weeks before they have to bring formal charges against them, but they declined to be drawn on how quickly they would move, saying they wanted to proceed “with the case appropriately by carrying out firm investigation.”

The single charge on which the pair have been arrested carries a maximum penalty of three years in prison.

The Taylors were arrested in the United States last year after Japan issued a warrant for them. The pair tried to block Japan’s extradition request, with their lawyers claiming the men would face torture-like conditions in Japan, but the US Supreme Court struck down their appeal in February.

“This is a sad day for the family, and for all who believe that veterans deserve better treatment from their own country,” Paul Kelly, their lawyer, said in a statement confirming they had been handed over to Japanese custody.

Representatives for Ghosn declined to comment, and the former tycoon has steadfastly declined to speak about his escape for fear of implicating those involved.

Ghosn was a global business superstar and head of an auto alliance joining Nissan, Renault and Mitsubishi Motors before his career came crashing to an abrupt end in November 2018, when Tokyo investigators stormed his private jet to arrest him.

The French-Lebanese-Brazilian was charged with four counts of financial misconduct over claims he hid compensation and misused Nissan funds.

After months in detention, Ghosn was on bail awaiting trial on the charges — which he denies — when he fled in what prosecutors call “one of the most brazen and well-orchestrated escape acts in recent history.”

The escape infuriated Japanese officials, particularly as prosecutors had regularly argued against his bail, arguing he was a flight risk.