No relief for coronavirus-battling India 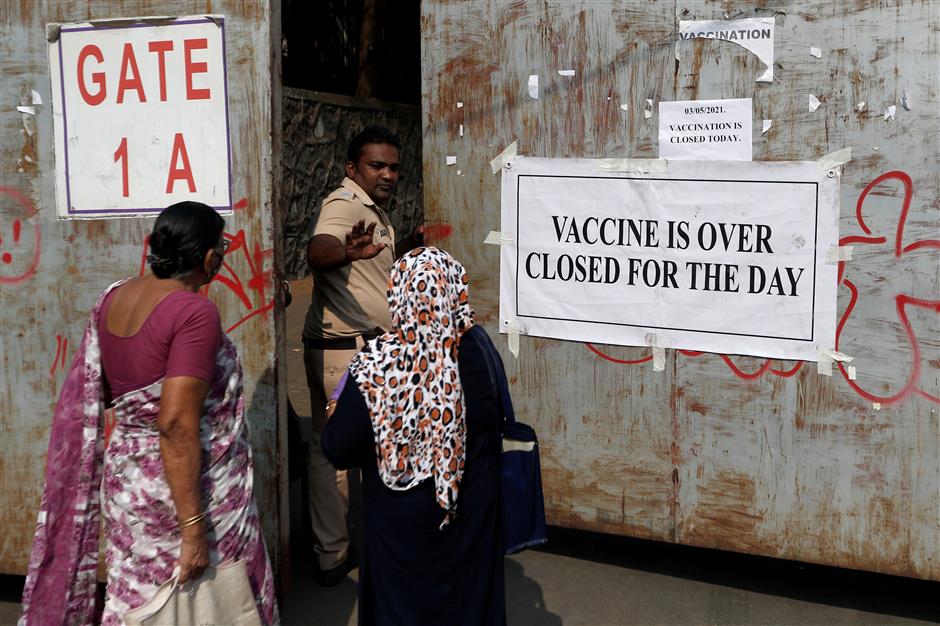 A policeman turns away two people who came to get their COVID-19 vaccination at a center in India’s financial capital Mumbai on Monday. Vaccine stocks in the country have nearly dried up.

India recorded 368,147 new coronavirus cases on Monday and 3,417 deaths as a catastrophic surge sweeps through the country.

The latest numbers came after leaders of 13 opposition parties urged the government to launch a free vaccination drive and ensure uninterrupted flow of oxygen to all hospitals.

on Monday, 24 COVID-19 patients died at a government-run hospital in the southern state of Karnataka amid reports of an oxygen shortage.

It was unclear how many died due to a lack of oxygen, but the chief minister ordered a probe into the incident.

“Every time we have to struggle to get our quota of our oxygen cylinders,” said B H Narayan Rao, a district official in the southern town of Chamarajanagar.

“It’s a day-to-day fight,” added Rao, as he described the hectic scramble for supplies.

Prime Minister Narendra Modi’s government has been severely criticized over its handling of the surge, which has pushed India’s already fragile and underfunded health system to the brink.

Massive election rallies organized by his Bharatiya Janata Party and other parties as well as a giant Hindu festival on the banks of the Ganges may have exacerbated the spread, experts said, adding that new variants could also be increasing cases.

Meanwhile, the world’s biggest cricket tournament, the Indian Premier League, said Monday’s match between the Royal Challengers Bangalore and Kolkata Knight Riders would be rescheduled after two players tested positive for the coronavirus.

The two players have self-isolated and medical personnel were tracing their contacts.

Despite rising cases, the league has held matches every evening behind closed doors since it kicked off in April.

India has confirmed 19.9 million COVID-19 cases since the start of the pandemic, behind only the US, which has counted more than 32.4 million.

More than 218,000 people in India have died, according to the health ministry.

Both figures are thought to be vast undercounts.

Offering a glimmer of hope, the health ministry said positive cases relative to the number of tests fell on Monday for the first time since at least April 15.