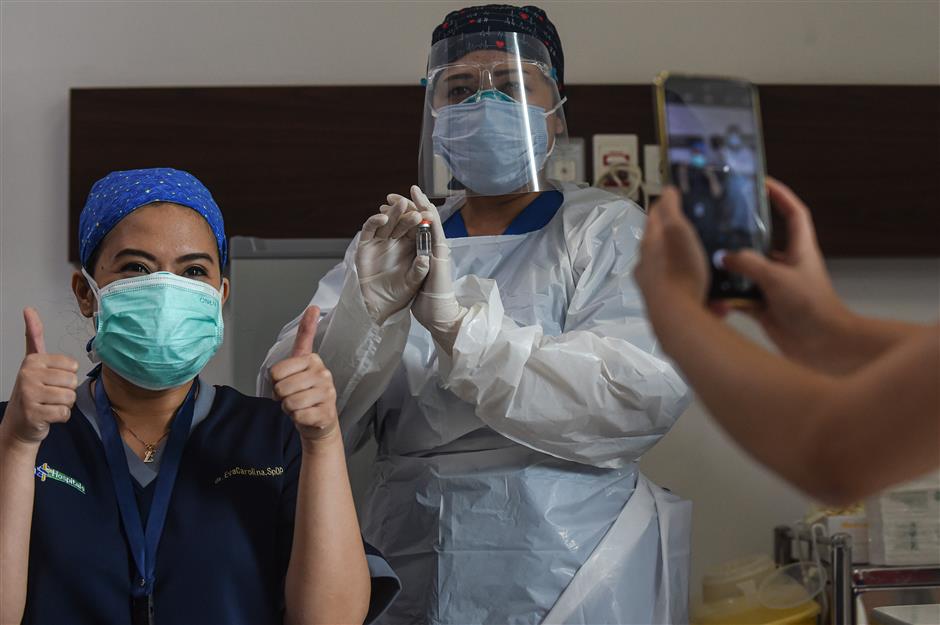 Medical workers take a photo with a dose of the Sinovac vaccine at a hospital as Indonesia begins mass vaccination against COVID-19, starting with its health care workers, in Jakarta, Indonesia, on January 14, 2021.

China's Sinovac vaccine against COVID-19 has appeared to be highly efficacious, as an overwhelming majority of vaccinated health workers were found protected from death and hospitalization, according to a Bloomberg report on Wednesday.

On Wednesday, Pandji Dhewantara, an official of the country's health ministry, told a press conference that among the 128,290 health workers vaccinated with Sinovac vaccines and tracked from January to March, 98 percent of them were protected from death and 96 percent from hospitalization as soon as seven days after the second dose.

Dhewantara also said that 94 percent of the workers had been protected against symptomatic infection.

The Indonesian study compared vaccinated people against the non-vaccinated to derive the estimated effectiveness, said the report. The median age of the participants is 31 years old.

In a Tuesday interview with Bloomberg, Indonesian Health Minister Budi Gunadi Sadikin said that another group of 25,374 people tracked showed the same effectiveness data for hospitalization and infection with the aforementioned group. Protection against death was 100 percent in the smaller group.

"We see a very, very drastic drop," in hospitalizations and deaths among medical workers, Sadikin was quoted as saying.