The Taliban declared an amnesty across Afghanistan and urged women to join their government on Tuesday, seeking to convince a wary population that they have changed, a day after deadly chaos gripped the main airport as desperate crowds tried to flee their rule.

Following a blitz across Afghanistan that saw many cities fall to the insurgents without a fight, the Taliban have sought to portray themselves as more moderate than when they imposed a brutal rule in the late 1990s.

While there were no major reports of abuses or fighting in the capital Kabul as the Taliban now patrol its streets, many residents have stayed home and remain fearful after the insurgents' takeover saw prisons emptied and armories looted. Many women have expressed dread that the two-decade Western experiment to expand their rights and remake Afghanistan would not survive the resurgent Taliban.

The promises of amnesty from Enamullah Samangani, a member of the Taliban's cultural commission, were the first comments on how the Taliban might govern on a national level. His remarks remained vague, however, as the Taliban are still negotiating with political leaders of the country's fallen government and no formal handover deal has been announced.

"The Islamic Emirate of Afghanistan with full dignity and honesty has announced a complete amnesty for all Afghanistan, especially those who were with the opposition or supported the occupiers for years and recently," Samangani said.

Other Taliban leaders have said they won't seek revenge on those who worked with the Afghan government or foreign countries.

He also said women were "the main victims of the more than 40 years of crisis in Afghanistan." 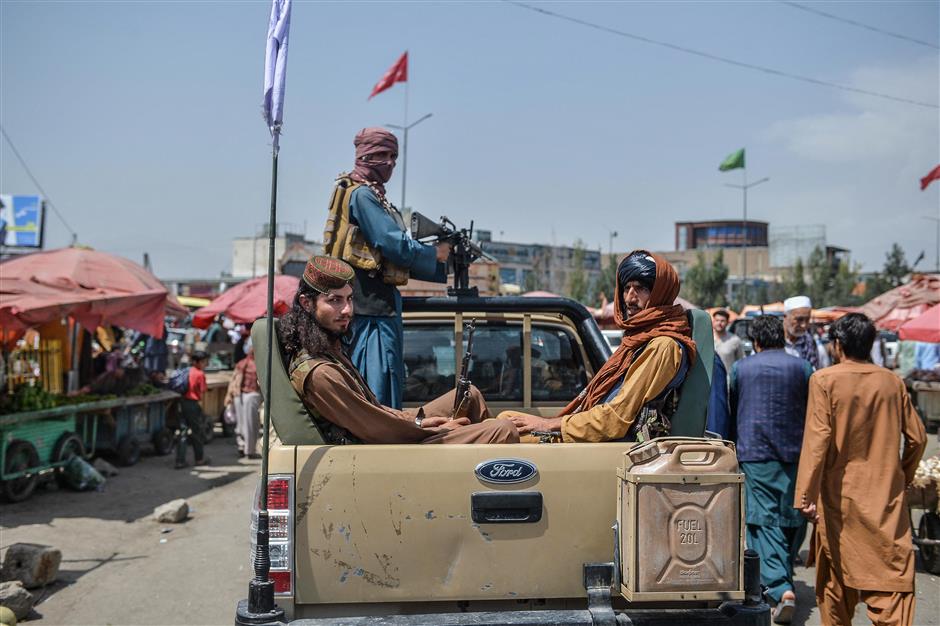 Taliban fighters on a pickup truck move around a market area, flocked with locals, in Kote Sangi area of Kabul on Tuesday, after Taliban seized control following the collapse of the Afghan government.

That would be a marked departure from the last time the Taliban were in power, when women were largely confined to their homes. Samangani didn't describe exactly what he meant by Islamic law, implying people already knew the rules. He added that "all sides should join" a government.

In another sign of the Taliban's efforts to portray a new image, a female television anchor on the private broadcaster Tolo interviewed a Taliban official on Tuesday in a studio – an interaction that once would have been unthinkable. Meanwhile, women in hijabs demonstrated briefly in Kabul, holding signs demanding the Taliban not "eliminate women" from public life.

Meanwhile, Kabul's international airport, the only way out for many, reopened to military evacuation flights under the watch of American troops.

All flights were suspended on Monday when thousands of people rushed the airport, desperate to leave the country. In shocking scenes captured on video, some clung to a plane as it took off and then fell to their deaths. At least seven people died in chaos at the airport, US officials said.

Stefano Pontecorvo, NATO's senior civilian representative to Afghanistan, posted video online on Tuesday showing the runway empty with US troops on the tarmac. What appeared to be a military cargo transport plane could be seen in the distance.

"I see airplanes landing and taking off," he wrote on Twitter.

Talks continued on Tuesday between the Taliban and several Afghan government officials, including former president Hamid Karzai and Abdullah Abdullah, who once headed the country's negotiating council. Discussions focused on how a Taliban-dominated government would operate given the changes in Afghanistan over the last 20 years, rather than just dividing up who control what ministries, officials with knowledge of the talks said.