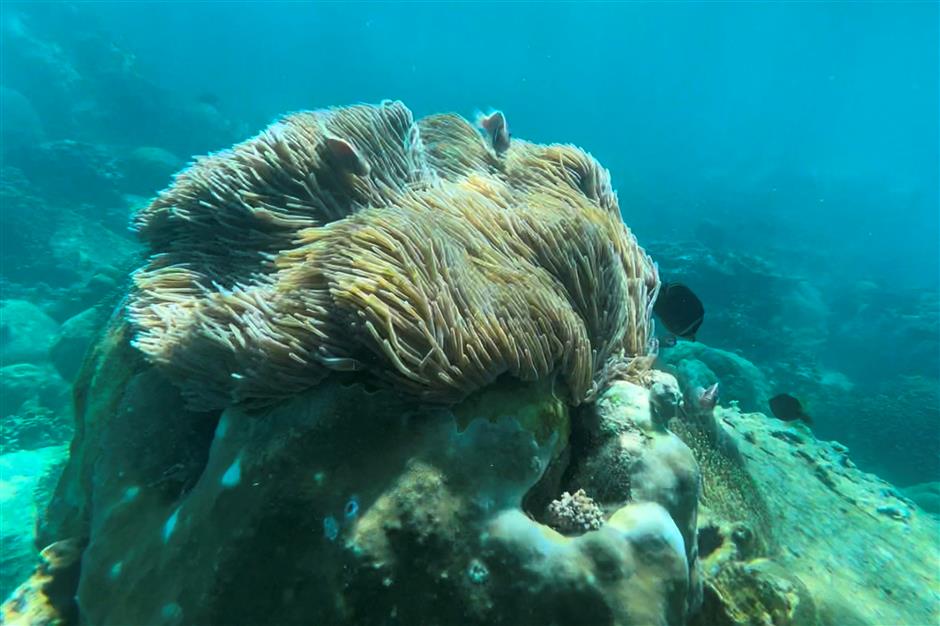 The photo taken on June 3, 2022 shows fish next to corals off Hon Mun island in Vietnam's Nha Trang Bay.

Vietnam has banned swimming and scuba diving at a popular central tourist spot in an attempt to revive its damaged coral reef, officials said Monday.

The country boasts more than 3,200 kilometres of coastline with crystal clear waters, vibrant sea life and sandy beaches that are a huge tourism draw.

Coral reefs across Southeast Asia have been badly hit by global warming, with scientists warning their degradation could have devastating environmental and economic knock-on effects.

Recent photos taken off Hon Mun island -- about 14 kilometres from the city of Nha Trang and popular with divers thanks to its diverse ecosystem -- showed the reef bleached and damaged.

In a statement they said the ban was to "evaluate the condition of sensitive area so that an appropriate plan to enact the sea conservation area" could be made.

Effective from Monday, the ban would last "until further notice", they added.

Around 60 percent of the coastal bed in the area was covered by living coral in 2020, according to state media, but more recent findings showed that had shrunk to less than 50 percent.

Previously local authorities blamed the shrinking ecosystem on climate change, noting that powerful storms in 2019 and 2021 had damaged the coral.

Divers expressed anger over the decision to close the waters.

"Swimming and diving activities were the least influence on the coral reefs, compared to other activities," diver Nguyen Son, from Ho Chi Minh City, told AFP.

"The ecosystem (around Hon Mun) should have recovered after two years of pandemic," said diver Trinh Ngoc Sang.

"Without proper management, the fishing vessels came in and destroyed the sea bed," he told AFP, recalling the sight of rubbish and dead coral during a recent dive.

"It would take dozens of years for the coral reefs to be restored, so they want to close it throughout?"

The United Nations Intergovernmental Panel on Climate Change has warned that 4.5 million people in Southeast Asia and the Indian Ocean region could be affected by damaged coral reefs.

The reefs support about 25 percent of marine biodiversity.

Vietnam's decision follows a similar move in Thailand, which restricted access to Maya Bay -- immortalized in the Leonardo DiCaprio film "The Beach" -- to give the local ecosystem a chance to recover.